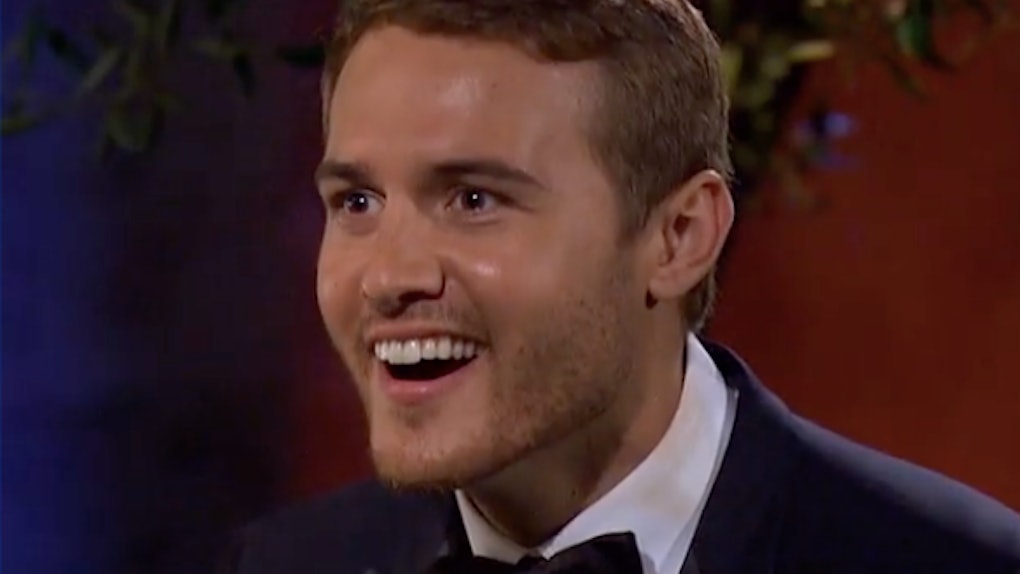 Why Is Hannah Brown On Peter Weber's 'Bachelor' Season? He Looks Shook

Fasten your seatbelts, folks, because Pilot Pete's Bachelor season is almost cleared for takeoff. Ahead of the show's Jan. 6 premiere, ABC released a first-look video of what's to come, and while there's plenty of the requisite steamy hookups, tearful conversations, and references to aviation, the preview also dropped a major bombshell on fans in the form of a beloved former Bachelorette. Yup, Hannah Brown totally shows up on Peter Weber's Bachelor season, and from the looks of it, it's going to to be a super-dramatic reunion.

Hannah and Peter have quite a bit of history between the two of them. In addition to being the Hannah's second runner-up, Pete also went down in Bachelor Nation history as being Hannah's mystery windmill sex guy. Though the couple seemingly had great chemistry during their time together, Hannah ultimately sent Peter packing with a heartbreakingly tearful goodbye. But now, considering how things turned out with her season's winner Jed, it's possible Hannah could be looking to rekindle her spark with the franchise's newest Bachelor, and may do so for all the world to see.

Check out the upcoming season's first-look promo — which ABC aired during the Nov. 25 Dancing with the Stars season finale — for yourself and get ready for your jaw to drop:

On Nov. 25, multiple official Bachelor Nation Instagram accounts posted a short teaser for the season that showed Hannah stepping out of a limo and Peter looking shocked in response. Initially, fans assumed this appearance would be similar to Hannah's stint on Bachelor in Paradise Season 6, during which she showed up to support her bestie Demi Burnett during a tough decision. However, the full preview for Peter's Bachelor season on YouTube tells a very different story.

When Hannah first appears in the video, sure, she could totally be giving Pete some friendly, sage advice about following his heart or whatever, but the second the clip cuts to Peter drawing out her name ("Haaannahhh Brown") and leaning in close to her, it's game over — there's clearly something more juicy going down between them. And it gets even wilder; the Bachelor then asks his former love interest: "What would you say if I asked you to come be part of the house?" TBH, when the promo then cut to the other contests screaming — seemingly in reaction to this new development — I felt that.

It's not super-clear when this interaction takes place, especially since Hannah has been busy tearing up the ballroom floor on DWTS this season. And, the clip doesn't reveal Hannah's answer to the (extremely loaded) question, so fans will just have to tune in to see if she will return to her roots as a Bachelor contestant to vie for Peter's heart.