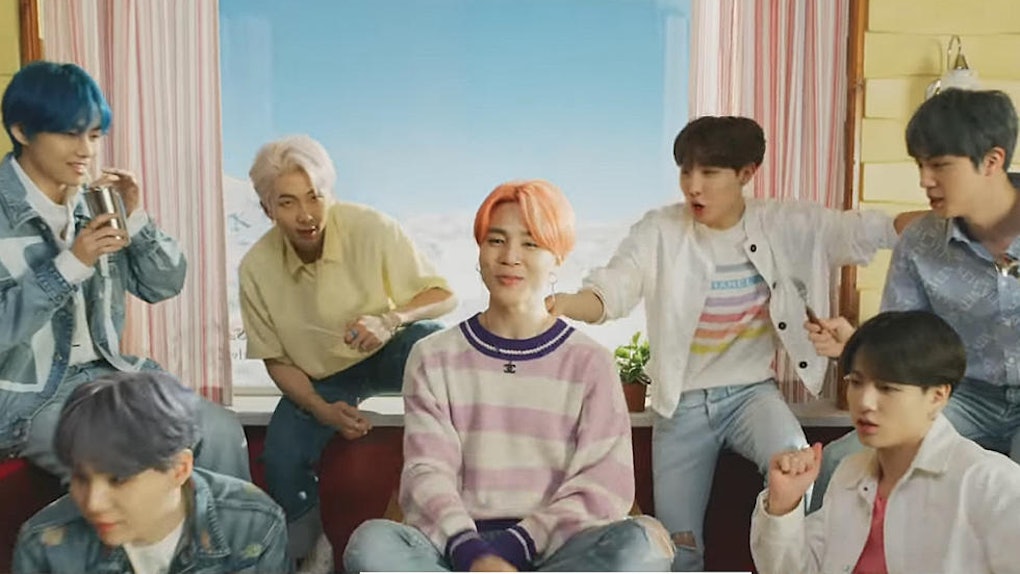 Halloween is quickly approaching, and everyone's already searching Pinterest and Instagram for their costume ideas. But pop culture fans are looking elsewhere for their Halloween inspo. Actually, it’s not a matter of where they’re getting their inspiration from, but who they're getting inspired by. It’s always fun to dress like your favorite celeb, and with BTS' rising popularity over the past few years, I bet that BTS will be one of the top sources of Halloween costume inspo this year. There are seven members — all of whom constantly change up their look with every music video and performance, BTW — which means there are endless costume ideas to choose from. I’ve put together seven BTS Halloween 2019 costume ideas that'll make all your friends say "oh, my, my, my" on sight.

Before BTS dropped their record-breaking album Map of The Soul: Persona in April, the group teased their album with the release of the "Persona" comeback trailer starring RM. In the video, RM sported a few different looks, and fans theorized they stood for each of RM's different personas.

RM's super chill, classroom look is the perfect mix of swag and simplicity that'll make you look super cool this Halloween without breaking the bank.

Put a beige or tan jacket on top.

Finish off the outfit with some blue jeans.

If you really want to go the extra mile, you can even buy yourself a white wig to match RM's icy white hair in the music video. Any white wig will do, but this one from BERON looks really cute, don't ya think?

BTS' 2019 Billboard Music Awards performance was definitely one to remember because it was the first time the group performed "Boy With Luv" live with Halsey. For this performance, BTS ditched their pink outfits from the "Boy With Luv" music video for some snazzy suits. Jin's outfit stood out because he wore an off-white trench coat totally different from the rest of BTS' dark suits.

To get Jin's 2019 BBMAs look, start with a beige trench coat.

Pair it with some black pants.

You can't forget the most important part: the red rose.

If you have a friend that loves "Boy With Luv" as much as you, ask them to dress up as Halsey so you two can recreate this iconic BBMAs moment:

In my opinion, one of the best parts of the "Boy With Luv" music video was Suga's solo. In the video, Suga rapped his epic verse while stepping on huge piano keys and fans thought the moment was supposed to reference the 1952 movie Singing In The Rain since a similar scene happened in the movie. Whether it was meant as a reference or not, Suga's part in the MV was still iconic — partly because of his slick outfit.

It's pretty simple. You just need to find yourself a dark pink or orange dress shirt to start.

Put a dark blue or purple blazer on top.

Style it with some matching blue or purple dress pants.

Finish it off with a black belt.

If you're feeling extra, you can accessorize with a wig, like this blue one from Spencer's.

Alright, now it's time for J-Hope, aka, the "sunshine" of BTS. Since he doesn't have the nickname for no reason, I thought it would be cool to go for one of J-Hope's cutest outfits. Back in June, for BTS' Love Yourself: Speak Yourself tour, J Hope wore a white T-shirt and blue overalls and gave his outfit some classic J-Hope flair by adding adorable accessories.

To replicate J-Hope's look, you'll want to start with a classic white t-shirt. If you don't mind writing on your clothes, you can also write the word "HOPE" on your shirt and draw some hearts, just like J-Hope did on his shirt. So cute!

Pair the shirt with some denim overalls.

Then, add accessories like a white bucket hat, which J-Hope tends to wear a lot. (Since all the BTS members seem to love bucket hats, you can save this for next year's Halloween.)

Finish off the look with a smiley face pendant necklace.

Yup. This outfit pretty much screams "sunshine," just like J-Hope.

BTS' "Boy With Luv" music video had BTS showing off a lot of different looks, such as their head-to-toe pink getups, their old-time, Hollywood glamour looks, and their denim-on-denim outfits. Jimin's casual denim look would be great for Halloween since it's so adorable and sweet like Jimin himself.

You can start the outfit with a pair of ripped blue jeans.

Then, add this adorable purple-and-white striped sweater for only $24.

If you want to get Jimin's exact look, you can buy this striped sweater from Lyst for $294. Talk about twinning!

And you can also accessorize with this pretty pinkish-orange wig:

On Aug. 9, V surprised the entire BTS ARMY by dropping his "Winter Bear" music video. The video showed V documenting his travels around the world as BTS embarked on their Love Yourself world tour. In the video, V wore a tan jacket, black pants and sneakers, and a black beret. They all worked to give V a totally artsy vibe.

It's difficult to find a jacket exactly like V's in the "Winter Bear" music video, so I think any similar tan jacket will do, like this one from SHEIN:

Add some black pants or leggings, like these ones from FOREVER 21:

You can't forget that black beret.

If you have a camera, make sure to take one around with you to really turn yourself into artsy V.

OK, I can't have a BTS Halloween article and not include BTS' all-pink outfits from their "Boy With Luv" music video, because those were unforgettable. Jungkook's hot pink getup totally made a statement and I'm positive it will make you stand out at any Halloween party, too — which is the whole point of dressing up for Halloween, right?

Basically, for this outfit, grab the pinkest clothes and accessories you can find.

Start with the most basic part of the outfit, which is a light pink T-shirt.

Style it with some hot pink pants.

And grab some hot pink shoes to match.

Those were just seven BTS Halloween costume ideas, but I'm sure there are a lot more BTS outfits you can find for Halloween because all of the members' outfits are worth trying to replicate, TBH.