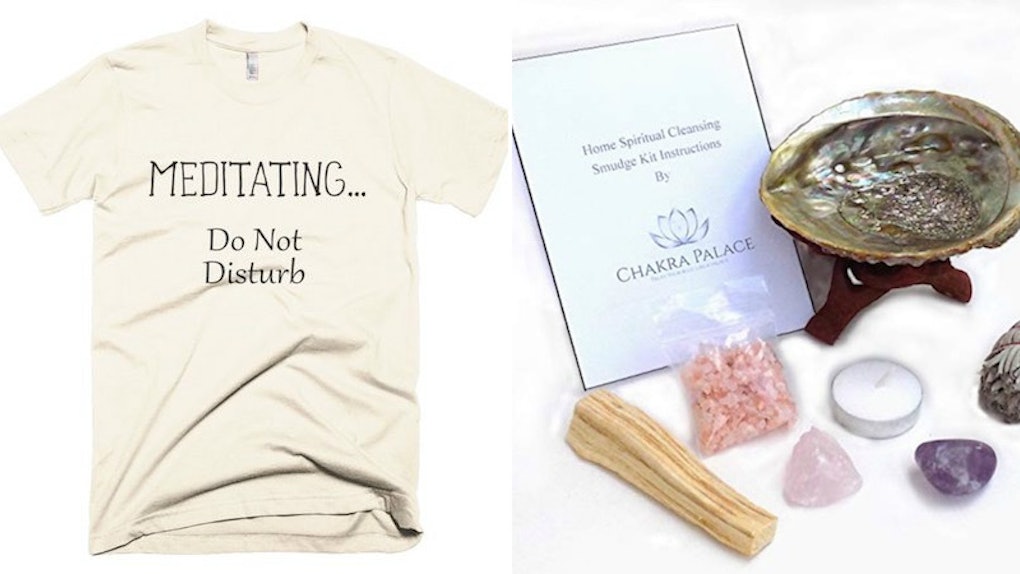 It's about that time, people — Halloween is almost here! And that means asserting your right to be the laziest human on the planet and throwing together a costume with the least amount of effort possible. Or is that just me? Maybe it's because I live my life in yoga pants and refuse to change out of them, even on holidays, but luckily, yogi Halloween costumes aren't just easy to put together; they're also the kind of costume that makes it look like you put some thought and effort into the concept, but in reality, you're just chillin' in your favorite stretchy pants while everyone else at the Halloween party is wearing an itchy wig or an uncomfortable, full-body banana suit.

Figuring out a Halloween costume each year can be a difficult process, and you may be tempted to show up your friends with something seriously epic or show-stopping. But hear me out for a sec on this yoga idea: For one thing, yogis are some of the coolest and most radiant people in the world. What's more, there are so many ways to put your own personal spin on a yoga-inspired Halloween costume, with just a tiny bit of extra brainstorming on your part.

Since you're admittedly a bit lazy, though, I've done the brainstorming for you. Here are six totally OM-mazing costumes to turn this Halloween into the most zen night of the year.

Grab your favorite breathable shirt and your comfiest pair of Lululemons, and bam — you're a yoga teacher for Halloween. Not a single penny spent, and guaranteed comfort all. Night. Long.

Honestly, though, if you want to go on a mini shopping spree at Lululemon instead of wearing the old threads in your closet, who am I to judge? Treat yo-self, girl.

The Girl Who's Always Meditating

Meditating, Do Not Disturb T-Shirt
$28
|
Etsy

Everyone knows that one yogi who doesn't mess around when it comes to their meditation practice. They're grounded, centered, sometimes a little seemingly stoned, and honestly, you want to know all of their secrets.

Whether this is you, or you kind of want it to be you, grab this meditation T-shirt from Etsy and be the chillest yogi on the block this Halloween.

Then, there's the yogi who knows everything in the book about crystals. This chick is your go-to when you're wondering how you should charge your rose quartz stone, or which gem you should pack in your suitcase on vacay.

And, of course, this yogi never leaves her sage and palo santo far behind, either. Carry around this smudge set to channel your inner crystal guru on Oct. 31.

Personally, as a teacher of the practice, I believe sun salutations are one of the most mind-clearing, nourishing aspects of any yoga class, so why not actually be a sun salutation for Halloween?

Throw some sunshine right over your boobs with this T-shirt from Redbubble, or heck, dress head to toe in yellow if you already have the clothes in your closet. And if anyone asks what you are on Oct. 31, enlighten them by showing 'em how a sun salutation is really done.

Balancing in half moon pose can be a struggle from time to time, but you always learn something about yourself when you're navigating these slightly more difficult asanas. Exude some mystical ardha chandrasana vibes with this "moon child" tee, or any other moon-themed attire your heart desires. And, again, if anyone has the audacity to look at you with a furrowed brow and ask what you are for Halloween, strike a half moon pose right then and there, and let the asana speak for itself.

Oh, sweet, sweet savasana. Let's be real: If you don't show up to your yoga class dreaming about the yogi version of adult nap time that comes at the end, who even are you?

This shirt will tell the world how much you can't get enough of corpse pose this Halloween. And, hey, it is called corpse pose, after all, so why not slap on some creepy face paint along with your savasana T-shirt? Spookiness factor, accomplished.