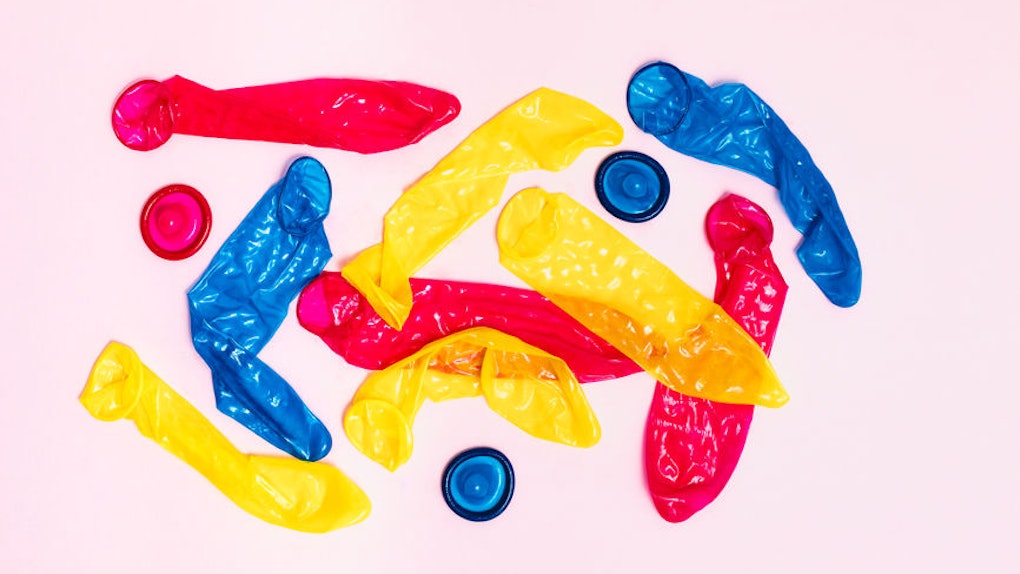 No feeling is quite as stomach-dropping as realizing there's a hole in the condom you and bae just used during sex. Cue the freakout, and the questions about how it even happened to begin with. Turns out, there are several reasons condoms are likely to break during sex. According to sexologist Dr. Nikki Goldstein, condoms can break if they're expired, if they've been kept in the heat, if there's too much friction and not enough lubricant during sex, and if you're using the wrong size rubber — and that's just a few of the reasons. But luckily, a condom breaking doesn't happen as often as you may think.

If you happen to find yourself falling into one of the 0-22 percent of people who experience a condom breaking during sex, fret not. There are ways to prevent pregnancy and STDs, which may be two of your biggest concerns post-breakage. But before we get to that, here are six reasons why the condom broke in the first place, so you know what to do to make sure it doesn't happen again.

Fun fact: Like almost everything else in this world, condoms do have an expiration date, people! And if your condom breaks, one of the reasons why may very well be because it's past its expiration date. "Most expirations dates are printed on the box and then on the individual condom wraps," Dr. Lakeisha Richardson, OBGYN, tells Elite Daily. "An expired condom is one of the most common reasons why a condom will break."

And while condoms may seem like one size fits all, another reason a condom might break is because it simply doesn't fit. "Using a condom that is too small puts tension on the latex and increases the risk of a tear or break, that's why it always important to use the correct size condom," Dr. Richardson says.

3. You're probably using oil-based lubricants that don't go with latex.

Some lubricants are meant to be used with condoms, while others are meant for when you no longer use the rubbers. And if you use the wrong lube when you are using condoms, the condom can tear. "Using products such as oils, lubricants, or lotions that are not compatible with latex can weaken the latex and cause the condom to break," Dr. Richardson explains. If you'd rather not have a broken condom, "do not use vaseline, baby oil, coconut or other body lotions that contain oil as lubricant," Dr. Jess O’Reilly, Ph.D., host of the @SexWithDrJess podcast, tells Elite Daily.

4. You stored them in the wrong place.

Sure, keeping a condom or two in your wallet seems like a good idea, but what about when you're outside in 90-degree weather all the time? Well, that may cause your trusty little friend to fail you. "Condoms should be storied in a cool, dry place," Dr. Jess says. "If you keep them in your wallet or in your car, the heat [may] compromise the integrity of the latex material and increase the likelihood of breakage."

If you're worried about a condom potentially breaking, you may think, "Hey, maybe we should wear two to make sure nothing gets out." Well, that'll probably do more harm than good. "The friction from two condoms can cause breakage," Dr. Jess explains. "This rule also applies to combining an external condom (the kind that fits over the penis) with an internal condom (often referred to as a female condom), which is worn inside the vagina or anus."

6. They're not used correctly.

Picture this: You and your sexual partner are about to have sex. You're kissing all up on each other, clothes are flying off, the heat of the moment is building up, and when you're about to do the deed, you remember you have to put on a condom. While you're in a rush to get things going before the ~mood~ goes away, you may not apply the condom properly or you might break it with your nails or teeth and not even notice.

It's important to take it slow, and ensure that you're putting on the condom the right way before you actually start having sex. "If you don’t take the time to properly apply a condom, it can increase the risk of slippage of breakage," Dr. Jess says. "Open the condom wrapper carefully and be sure not to tear it with your teeth or finger nails. Keep extra condoms on hand in case of breakage while opening. Leave a little space at the top of the condom and roll it gently down all the way to the bottom." Take your time. Better safe than sorry!

What can you do if a condom breaks during sex?

Well, the first thing you'll probably do is freak out a little, especially if you're not on some other form of birth control. This is normal. Once you've gotten past that, on to step two: Preventing pregnancy. "If the condom breaks, there are several emergency contraception options," Dr. Loanzon says. "The most effective emergency contraceptive is the copper IUD which has a failure rate of less than 1 percent. An added benefit is that the copper IUD (Paragard) is a long-acting reversible contraceptive (LARC), and thus has an efficacy of preventing pregnancy 99 percent of the time and can be used as a continuous contraceptive for 10 years after placement."

There's also, of course, the morning-after pill. The most well-known brand is Plan B, because you can get it over the counter. According to its site, the sooner you take Plan B after unprotected sex or birth control malfunction (read: a broken condom), the better it works. But you do have a max of 72 hours to take the pill. Dr. Loanzon also mentions Ulipristal, which is the same concept as Plan B, but it requires a prescription from a health care provider and can be used up to 120 hours after unprotected sex or birth control malfunction. "It is important that these medications be used as soon as possible after unprotected intercourse to decrease the risk of pregnancy," Dr. Loanzon says.

The next thing you should do after a condom breaks is get tested for STDs. "You should see a physician as soon as possible for immediate testing and then follow up testing in 4-12 weeks," Dr. Richardson suggests. "You may also request prophylactic treatment if your sexual partner has a history of STIs."

Dr. Loanzon also recommends gently washing the genitalia (i.e. penis, vulva, anus, and adjacent skin) with mild soap and water, as it "may reduce the risk of fluid exposure, however, this method has not been well studied. I do not recommend women to douche as that may increase risk of other vaginal infections." And for good measure, "Some providers also recommend applying spermicide vaginally as soon as possible to decrease the risk of pregnancy," she adds.

How can you keep this from happening?

It's safe to say that once you've experienced a condom breaking, you'd want to do everything you possibly can to make sure it doesn't happen again — and with good reason. It's a scary feeling! Dr. Goldstein recommends keeping your condoms in a cool, dry place, and always checking the expiration date.

"Make sure you always have your favourite condoms on you, and if you are only with one partner, ensure to have the right size, or with multiple partners have a selection of sizes. Use a water-based or silicone lubricant, and add the right amount using a few drops on the inside of the condoms, at the tip, and also on the outside. Make sure you be careful when opening the wrapper and roll the condom all the way down to the base."

A condom breaking can happen to anyone, so don't freak out. Think logically, take the steps necessary to prevent an unwanted pregnancy or the spread of STDs, and do what you need to do to make sure it doesn't happen again.