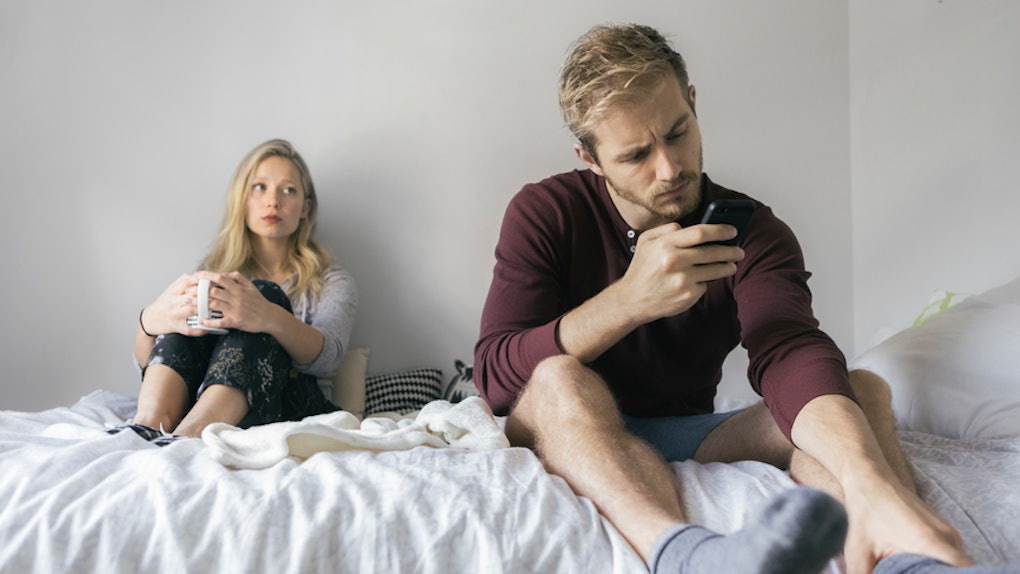 12 Brutally Honest Phases Of Falling Out Of Love, So Grab Your Tissues

I've got some bad news. Almost every single relationship you will ever have is going to end. Sorry, but I did warn you it was bad news. Here's the good news: The one that doesn't end is worth all the trial, error, and heartbreak along the way. Each breakup is another step toward finding something more meaningful. While that's ultimately pretty amazing, the road there can be tough. Sometimes it means your relationship will end in an epic, explosive fashion, but usually it’s more of a slow decline as you go through the various (and brutal) phases of falling out of love.

Falling out of love with someone usually follows a pretty standard path. What varies is how quickly you go through the steps. It may take weeks, or months, or, for some folks, much less time. It can be a slow grind to acceptance, or like one day someone flipped a switch and you only realize later that it had actually been building for a long time without you consciously noticing it. Regardless of how quickly or slowly it plays out for you, anyone who has fallen out of love one time (or 10) will recognize these stages, because they happen pretty much like clockwork. So, grab some tissues because it’s about to get brutally honest up in here. Let’s run through the phases of losing that loving feeling.

1. The Butterflies Are Gone

When you first got together, you would feel butterflies whenever they were around. Every touch was like magic. But suddenly, those feeling are gone. Instead of worrying, you just remind yourself that this is normal, it’s just a sign that the honeymoon phase has ended and every couple goes through it. But there’s some quiet doubt that it’s a sign of something more serious — and you promptly ignore it.

2. Your Partner Starts Getting On Your Nerves

Spend enough time with anyone and they are going to annoy you from time to time. But this is different. Instead of passing, the irritation persists and it’s not even over legitimately annoying things, its just — everything. You can’t seem to stop side-eyeing everything they do.

3. You Get Bored When They Talk

Remember when you used to hang on their every word? Yeah, those days are over. You just want to tune them out as they ramble endlessly about things you once found fascinating. And honestly, you don’t really have the energy to tell them much either. Conversation just requires so much effort.

4. Their Touch Gives You The Creeps, But You Try And Fake It

It’s as if someone flipped a switch and suddenly the touch you used to crave and thought you could never get enough of now makes your skin crawl. You want to flinch away and avoid it, but you also want to protect their feelings, so you put on a brave front and hope this feeling will pass.

The feeling doesn’t pass. But instead of grinning and bearing it, you’ve stopped accepting touch or being affectionate. Sure, you feel guilty when you see it’s hurting their feelings, but the relief of having your physical space is so profound, it’s worth the guilt.

6. You Become Critical Of Everything They Do

At first your annoyance was reactive — they were doing things that got on your nerves. Now your irritation has become proactive. You are critical of everything they do, and might do, and should do but don’t. You begin silently (or not so silently) judging them.

7. You Start Comparing Them To Everyone Else

Your eye has started to wander. There are so many other people out there, so many other experiences, that could be so much better. You compare and contrast your partner against everyone, and they are usually not favorable comparisons.

One of two things starts to happen. Either you begin fighting constantly because you’re both frustrated and critical of each other to the point were it boils over but never really gets resolved, or worse, you stop fighting completely because one or both of you has checked out and don’t have the energy to even fight about it anymore. Neither is good.

You used to do everything together but now your calendar is filled with activities that keep you apart. You realize it’s a relief to get away and dread your time together.

You begin to panic because you can’t deny what’s happening anymore. That little voice that has been whispering that there's a problem is now shouting and won’t be ignored. You start to mourn the love you had in advance of the inevitable split.

The part of you that remembers how amazing it was at first fights to hold onto hope. You may even try going through the motions to see if faking it ’til you make it will help reignite the passion.

It doesn’t. Your heart may be breaking but there is also a powerful sense of relief that comes with accepting that you’re just not in love anymore and it’s time to move on.

Falling out of love isn’t fun for anyone, but sometimes it just happens. Just try and be gentle with your partner if they aren’t on the same page. You’ll get through it, and you’ll both find love again.