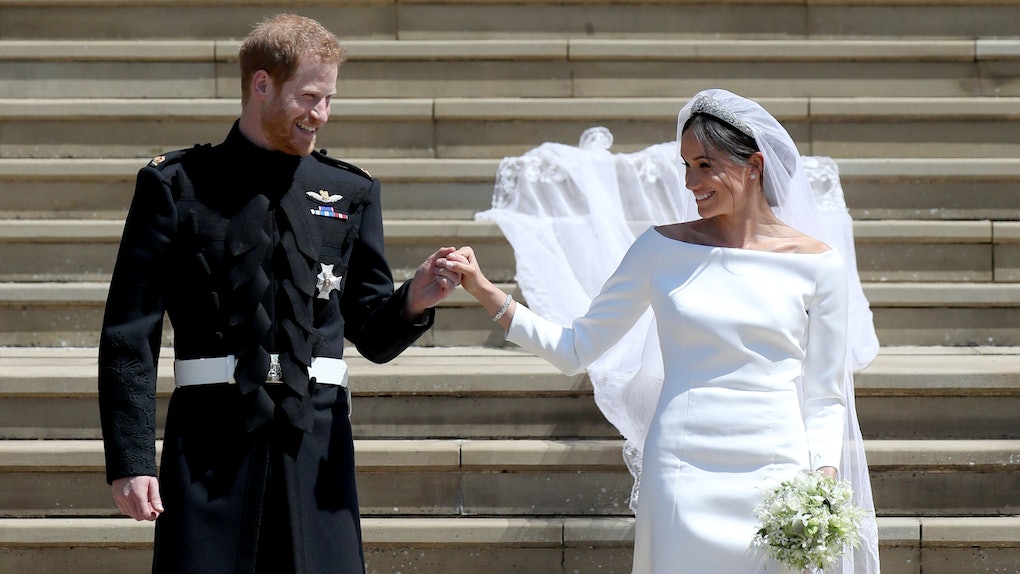 Time sure does fly, folks. Although it may seem like Prince Harry & Meghan Markle tied the knot just yesterday, it's actually been an entire year. The two celebrated their one-year wedding anniversary on May 19, and needless to say, a lot has happened in a year — especially in Hollywood. The celebrity relationship moments since Prince Harry and Meghan Markle got married have been abundant, to say the least, And even though my obsession with baby Archie Harrison Mountbatten-Windsor is still in full swing, for those of you who need a Royal Family break, I am here for you. In case you've forgotten about all of the other celebrity dating shenanigans that have happened since Harry and Meg said "I do," prepare yourself for a walk down memory lane. (It's hard to believe this all happened in a year.)

Since May 2018, so many celebrity couples have gotten together, broken up, and gotten back together again. And let's be real, keeping track of all of these happenings can start to feel like a full-time job. Once you add engagements and weddings to the mix, it would take a never-ending color-coded spreadsheet to keep track of everything that's gone down. And although I'd love nothing more than to draft that spreadsheet, we all know that would legit be impossible. But fret not, because the highlights are still very juicy. Here are some of the most memorable celebrity relationship moments since the royal wedding, that were too intense to forget.

Even though this feels like a million years ago, alas, it was not. Everyone was convinced they were dating after these two attended the 2017 Met Gala together. As the rumors spun, it became clear there was nome truth to them. Suddenly, they were everyone's favorite couple. It's no surprise that their stunning wedding and festivities in December 2018 were definitely for the books.

Speaking of weddings, Hailey Baldwin and Justin Bieber got married in September 2018. Their whirlwind romance has been in the public eye repeatedly ever since. However, despite their reported marital struggles, the couple has pulled through and continues to maintain a united front.

One royal wedding was good, but two in one year?! The utter decadence still blows my mind. Even though Meghan and Harry were a tough act to follow, Princess Eugenie and Jack Brooksbank's wedding in October 2018 was just as gorgeous.

I can't think of any other celebrity romance that escalated as quickly as Ariana Grande and Pete Davidson's. They first sparked dating rumors in early May 2018 and made it Instagram official by the end of that month. By mid-June 2018, the couple confirmed their engagement on Instagram, and by October 2018, they were broken up.

5. Cardi B And Offset's Split And Subsequent Reunion

In June 2018, Cardi B and Offset shocked fans when they revealed they were secretly married! Cardi was also pregnant with their baby girl, Kulture. Kulture was born in July 2018, and five months later, in December, Cardi revealed that she and Offset had called it quits. Later that month, Offset infamously interrupted Cardi's Rolling Loud set with flowers, essentially begging her to take him back. By February 2019, they were attending award shows together and seemingly, very much back on. The couple is still going strong.

Who could forget this whole thing? Following his breakup with Grande, Davidson was linked to British actress Kate Beckinsale starting in January 2019. The duo was spotted attending events, premieres, parties, and (tonsil) hockey games, but all good thing come to an end. In April 2019, a source reportedly told Entertainment Tonight that Beckinsale and Davidson had broken up.

Unfortunately, the reigning queen of breakup songs may have some new inspiration. In April 2019, the singer's representatives confirmed that Adele and husband Simon Konecki's eight-year relationship had come to an end. However, they are planning on co-parenting their six-year-old son, Angelo.

I can't think of any other 2019 scandal that has gotten as much attention as the debacle between Khloé Kardashian, Tristan Thompson, and Jordyn Woods. ICYMI, in February 2019, Thompson was reportedly seen getting cozy with Woods (Kylie Jenner's best friend) at a house party in Los Angeles. Rumors flooded the web until Woods appeared on Red Table Talk to tell her side of the story, which was that Thompson had reportedly kissed her, but nothing else happened beyond that. Kardashian did not take this well, and the status of the relationship between Woods, Jenner, and Kardashian remains unclear.

The author and the Avengers actor have managed to keep the details of their romance pretty private. However, we do know that the couple reportedly began dating in spring 2018 and revealed their engagement in January 2019.

Who would've thought that we'd be gifted with two Jonas weddings in such a short period of time? Sophie Turner and Joe Jonas got hitched in May 2019 following the Billboard Music Awards, in none other than fabulous Las Vegas. Spoiler alert: There was an Elvis impersonator, and that's all you really need to know.

Although Camila Mendes and Charles Melton aren't the only IRL Riverdale relationship, (Lili Reinhart and Cole Sprouse, I'm looking at you) they're definitely serving up some serious couple goals. These beauties made it Instagram official in October 2018, and haven't shied away from doting on each other online ever since.

Seriously, so much has happened, people. Here's hoping the next 12 months are just as exciting as the last. (And that we get an Archie photo soon. In honor of mom and dad's anniversary, perhaps?)