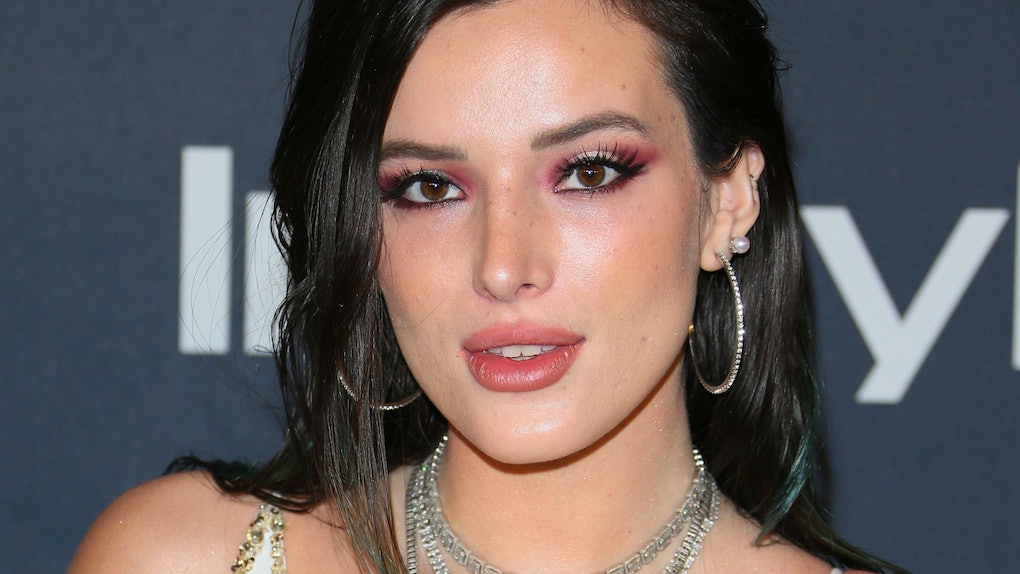 11 Celebrities Who Have Been In Open Or Polyamorous Relationships

While some people consider open and polyamorous relationships "non-traditional," they're more prevalent than you may think. Just like marriage, monogamy is a social construct — just ask celebrities who have been in open or polyamorous relationships. From reality TV stars to A-list actors, plenty of celebs have participated in non-exclusive partnerships, and IMO, they're an inspiration to anyone who would like to experiment.

If you're not clear on the difference between open and polyamorous relationships, then maybe sexuality educator and social worker Aida Manduley can help clear things up. As they previously told Elite Daily, the major difference between poly and open relationships is the level of emotional involvement. "Polyamory is a type of non-monogamy identified by its focus on having multiple relationships with the consent of all people involved, and by its not shying away from emotional/romantic involvement," they explained. An open partnership, according to Manduley, is "a relationship where there's a primary partnership of two individuals and they can both have adventures, usually just sexual, outside that 'main' relationship."

Both open and poly partnerships involve consent from all partners, as well as plenty of trust and communication, and these open and poly celebs have proven relationships don't have to be monogamous to be successful.

During a guest appearance on the episode of The Bachelor: The Greatest Seasons — Ever! in August 2020 Taylor Nolan revealed she's experimenting with polyamory. "It's been a really interesting last kind of two and a half-ish years of experimenting, of exploring kind of what kind of a relationship I want to be in," she told Chris Harrison. "I've definitely kind of experimented more with poly-type relationships."

Later, during an October episode of her podcast, Let's Talk About It With Taylor Nolan, Nolan opened up about her non-monogamous relationship with her new BF, Zach. "My preference of style of relationship is monogam-ish, to be consensually non-monogamous," she explained. Though Nolan can see herself getting married in the future, but she doesn't see herself spending her life with just one person. "Will my marriage be, 'He's the one and only person I have sex with the rest of my life and we cohabitate and we're each other's everything?' No, not at all," she said.

In April 2020, Shailene Woodley opened up to the New York Times about her experience with open relationships. "Listen, I'm someone who has experienced both an open relationship and a deeply monogamous relationship in my life," she said, "and I think we're in a day and age where there should be no rules except for the ones designed by two people in a partnership — or three people, whatever floats your boat! But there has to be a level of responsibility in any relationship dynamic, and that responsibility is simply honesty and communication and trust. Apart from that, it's really none of our business what people choose to do with their lives."

Since walking down the aisle in 1997, Will Smith and Jada Pinkett-Smith have acknowledged their union is a bit unconventional. Back in February 2005, Smith spoke to the Daily Mail about how he and his wife communicate their sexual desires. "Our perspective is, you don't avoid what's natural," he said. "You're going to be attracted to people. In our marriage vows, we didn't say 'forsaking all others.' The vow that we made was that you will never hear that I did something after the fact. If it came down to it, then one can say to the other, 'Look, I need to have sex with somebody. I'm not going to if you don't approve of it — but please approve of it.'"

During an April 2013 interview with HuffPost Live, Pinkett-Smith offered more insight into her marriage. "I've always told Will, 'You can do whatever you want as long as you can look at yourself in the mirror and be OK,' because at the end of the day, Will is his own man," she said. "I'm here as his partner, but he is his own man. He has to decide who he wants to be and that's not for me to do for him. Or vice versa."

Though it's unclear whether she's actually been in a poly relationship, Smith and Pinkett-Smith's daughter, Willow, expressed a preference for polyamory during a June 2019 episode of her mom's show, Red Table Talk. "I love men and women equally, and so I would definitely want one man, one woman. I feel like I could be polyfidelitous with those two people," she said. "I'm not the kind of person that is constantly looking for new sexual experiences. I focus a lot on the emotional connection and I feel like if I were to find two people of different genders that I really connected with and we had a romantic and sexual connection, I don't feel like I would feel the need to try to go find more."

Bella Thorne first confirmed her relationships with both rapper Mod Sun and YouTuber Tana Mongeau during an October 2018 interview with the Los Angeles Times. A few months later, Thorne went into further detail about her two relationships for the February 2019 issue of Gay Times. "I don't think anybody will really understand the bonds that I share with Mod or Tana," she said. "Yeah, we joke around about poly, but we aren't in the sense that we don't put a word, a box, or label too many things. It is what it is."

During a November 2019 interview with Cosmopolitan, Thorne spoke about why she's attracted to polyamorous relationship. "If it works, you can spend a weekend with two people and you're all hanging out and having fun and smoking, and like, sharing stories up late at night," she said. "Kind of having fun acting like children in that way. It's a really fun experience and I have been able to capture that a couple times, and I just love that idea. I love loving two people at once."

In January 2019, Mongeau took to her YouTube channel to explain the complexity of her polyamorous relationship with Thorne and Mod Sun. "It's funny because meeting Bella and going into it, in the beginning, I felt like there was this tension between Mod and I," she said. "Here I am just coming in and Bella wants me here but she has a whole a boyfriend and he wasn't my boyfriend and I didn't want him to be my boyfriend. He didn't want me to be his girlfriend. It was this weird thing of him and I sharing her. But after time, it became so harmonious and absolutely normal to us."

Not long after he (sort of) tied the knot with Mongeau, Paul confirmed he and Mongeau were in an open relationship during a September 2019 interview with Entertainment Tonight. He even said it would be "dope" if Mongeau hooked up with Noah Cyrus, who she'd been flirting with on social media. "Since the start of our relationship it's been, like, an open type of thing because that's just how we both are," he said. "And then Noah and Tana are, like, wanting to hook up and I think Noah's the one pushing that narrative, which I think is dope, again."

Younger star Nico Tortorella and their partner of 14 years, body-neutrality advocate Bethany Meyers, have labeled their relationship as "queer polyamorous" — though they have mixed feelings about labels in general. Soon after getting married, the two opened up about their relationship in a March 2018 essay for Them, writing, "Most think we planned this and one day decided we would be multiple-love kind of people. We didn't. It's just the way our relationship developed over 12 years. We became polyamorous without ever really trying, and we let each other go so often; I guess we finally realized it's the reason we are impenetrable. It's hard to break something that bends."

During the Season 1 finale of The Hills: New Beginnings, Kaitlynn Carter shared details about her open relationship with Brody Jenner. When asked by Ashley Wahler whether Jenner had ever slept with other women while he and Carter were together, Carter said, "Not without me being involved, OK? Everything with me and Brody is under my control, let's put it that way." Later, during a confessional, she added, "There's not one part of our relationship that I'm ashamed of or that I would do differently. I just think that the world isn't necessarily ready to hear about all that. Not everybody is so open-minded or accepting of other people."

A healthy relationship isn't always a monogamous relationship, and these celebs are proof of that.