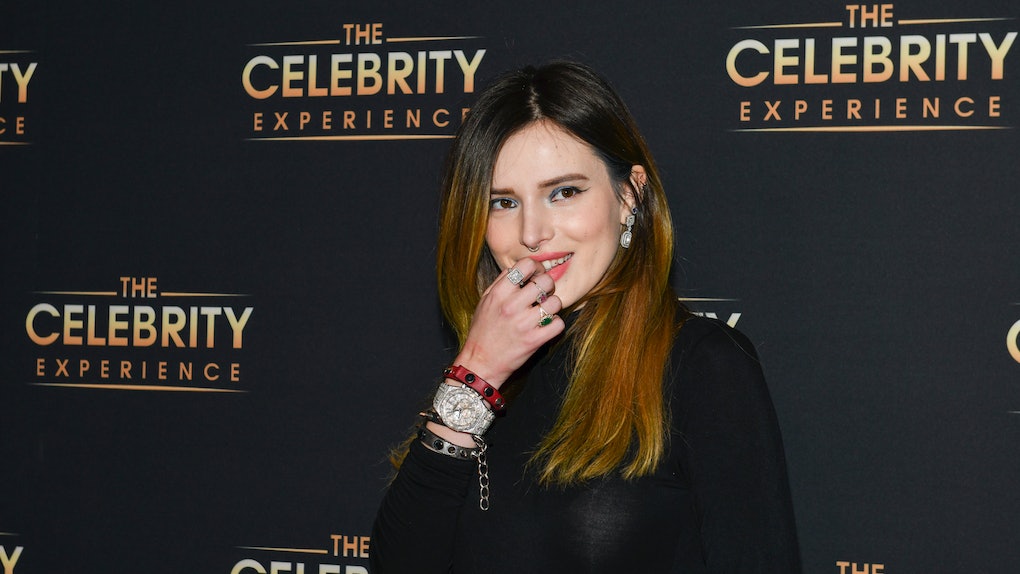 Bella Thorne is known for her candid honesty and genuine authenticity, and because of it, the former Disney Channel star (who is now a star in her own right) is almost always in the limelight. From her successful acting career to her star-studded dating history (remember those Scott Disick rumors?), Thorne is no stranger to the news cycle. Now, the 21-year-old is getting even more real about her romantic life, opening up to Gay Times magazine about how she doesn't put any label on her relationships. Yes, that's plural. Bella Thorne’s quotes about her open relationship are seriously insightful, and show just how happy the young star is.

In case you missed it, Thorne spoke about her two relationships for the first time with the Los Angeles Times in October 2018, revealing she was dating rapper Mod Sun and YouTuber Tana Mongeau at the same time. For the February issue of Gay Times, Thorne revealed more details about what she calls (or doesn't call) her connections with both Mongeau and Mod Sun.

"In this world, it’s like you’re either gay or you’re straight; there’s no in between," she told Gay Times, according to People. "If you f*** a guy once, you must be gay. Like, what? No. That’s just being fluid."

Thorne hasn't been shy about uploading pictures with her baes, either. She seems proud of her relationships, and seemingly very happy with both Mod Sun and Mongeau. "I don’t think anybody will really understand the bonds that I share with Mod or Tana," Thorne told Gay Times. "Yeah, we joke around about poly, but we aren’t in the sense that we don’t put a word, a box or label too many things. It is what it is."

There you have it! It's as simple as that. Thorne is happy with both of her baes, and if she doesn't want to put a label on it, then she doesn't have to. As long as everyone involved is happy and feels respected, then that's all there is to it. Back in 2017, Thorne revealed to Harper's Bazaar that she had yet to date a girl, but that she was ready. "I've done other stuff with girls, but I really want to actually date a girl," she told the magazine at the time. Now, she's got a relationship that makes her happy, careers both on-stage and on-screen, a record label, her own beauty line, a merchandise line... basically, she's killing it.

Thorne's relationships are beautiful because they're hers — she made them what she wanted them to be. This relationship is a great example that love doesn't have to fit a mold, and if Thorne doesn't want to put a label on it, so be it. Growing up in the public eye was probably pretty stressful, and while Thorne still shares a lot of her personal life on social media, she doesn't owe anyone anything, especially not an explanation. Happiness is happiness, and love is love. End of story.