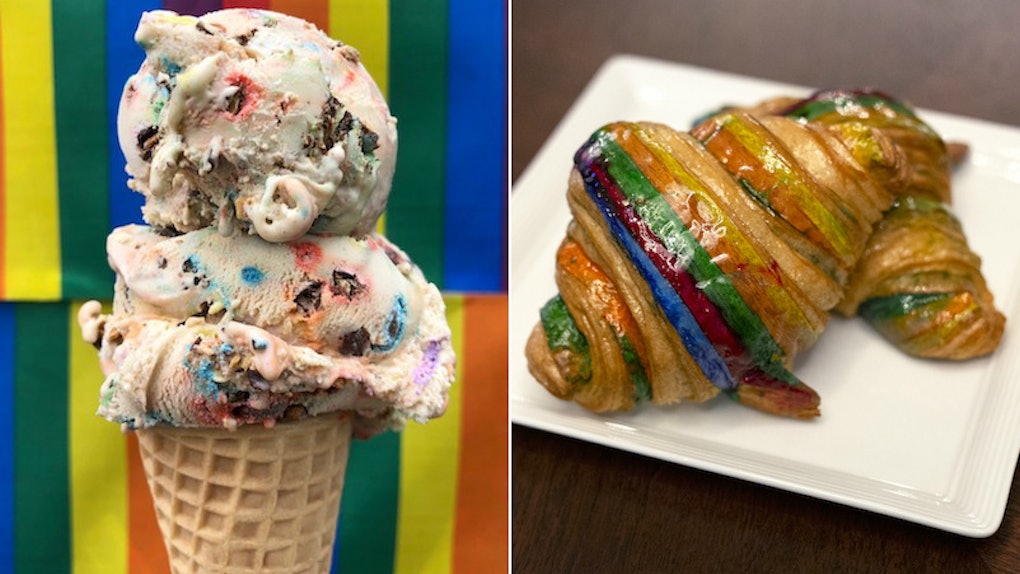 Let's be real: There are so many ways to celebrate Pride Month, whether you plan on rocking rainbow gear or marching in your city's Pride parade. You can also add colorful food and drinks into your diet so you can spread the love while you snack. If you're hoping to upgrade your meals throughout the month, you might be interested in these Pride treats that are available in June 2019. Whether you're craving Pride-inspired pancakes or a colorful cocktail, you can get in on the tasty fun.

If you're currently on the lookout for celebratory rainbow snacks, you've probably noticed that tons of companies have been announcing 'em. While some of them have released rainbow packaging and merchandise — like Bud Light's GLAAD bottles and Starbucks' Pride tumblers — others have announced food and drinks that literally feature rainbow ingredients, such as Shake Shack's Pride Shake. Whether you're drinking out of a Pride tumbler or nibbling on a rainbow-colored sprinkles, you're supporting the cause in a truly delicious way.

Those are only a few examples of Pride-inspired snacks and drinks that've become available this year, but there are plenty where they came from. (And, yes, there's another boozy option on the list.)

If you like those bite-sized Baked by Melissa cupcakes (same), then you'll love the company's Pride Pack. You can order it on Baked by Melissa's website until June 30, 2019, and 10% of net proceeds will go to New York City's LGBT Community Center.

Those of you who'd rather snack on candy instead of cupcakes can scan Sugarfina's Rainbow Candy collection. If you buy the Rainbow Bears, Sour Rainbows, or the Chocolate Confetti online or in a Sugarfina store, 100% of net proceeds will be donated to GLAAD, per the company.

Your go-to snack bar got a rainbow makeover, too, and you can grab one while supplies last on KIND Snacks' website.

If you live near an Ample Hills Creamery, you can try the company's limited-edition Pride flavor, cleverly called "Baby, I Was Churned This Way." The selection — which will be available throughout the month of June — includes hazelnut ice cream with rainbow-colored sunflower seeds that are literally covered in chocolate, per the creamery.

Shake Shack is also joining in on the fun with a cake batter milkshake that's topped with "rainbow glitter sprinkles" (YUM). You can sip on it at your local U.S. Shake Shack throughout the month of June. (Just keep in mind that you won't be able to find it at stadiums, airports, transit centers, and ballpacks, according to the company.)

If you're looking for a quick snack, grab a Pride Month Lemon Poppyseed Oat Bar from Bobo's. You can buy a six-pack on the company's website for $14.94.

Hazel Coffee and Cocktails, an eatery in Mandalay Bay Resort in Las Vegas, Nevada, is offering a rainbow "Chrisopher Street Croissant" throughout the month of June. If you find yourself in the area, stop by and try one.

While you're in Vegas (if you're visiting, that is), you can also stop by Della's Kitchen for a PRIDE Stack. The pancake breakfast is made with Fruity Pebbles, which also gives it a nostalgic twist. These will also be available throughout the month of June.

If you'd rather sip on something boozy, head to Condado Tacos and try its Pink Pride Frozen Margarita. According to the taco joint, $1 from each margarita sold will be donated to The Trevor Project, which is an organization geared toward providing suicide prevention and crisis intervention for the LGBTQIA+ community.

If you'd rather not sip on anything boozy, try bubly's All for Love Pride Pack. The sparkling water package includes 18 cans of different flavors and colors, and you can get it while supplies last on Boxed.com, Walmart.com, and Amazon.com.

As you can see, there are plenty of options if you're hoping to snack (or sip) on something colorful during Pride Month. Depending on where you live, you can pick your favorite one show your support.