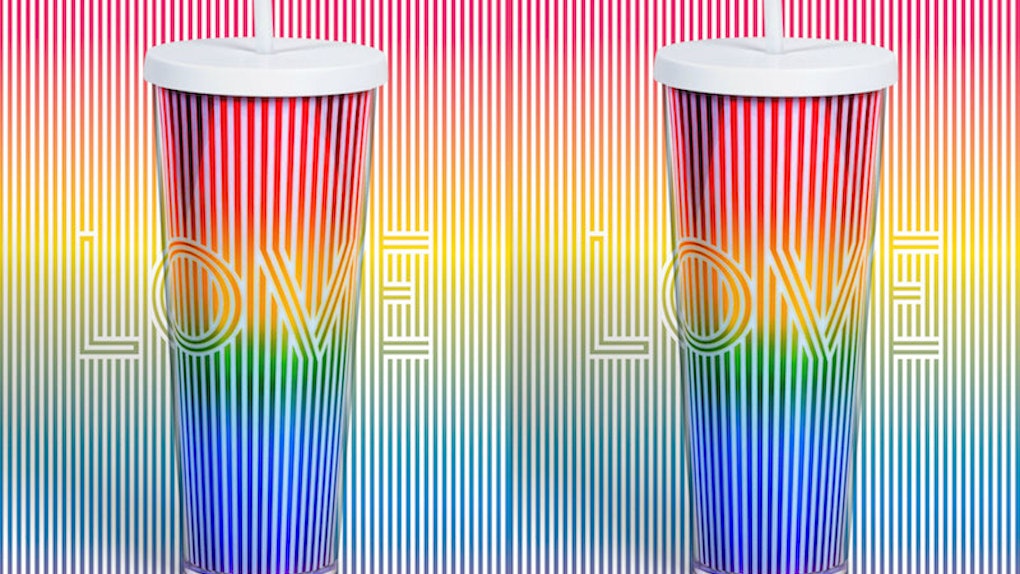 Summer is right around the corner, which means you have a few things to look forward to: warm weather, beach trips, iced coffee, and Pride Month. In fact, Pride Month (aka June) will be here before you know it, which means it's time to stock up on all the rainbow-colored merchandise that you can. Thankfully, Starbucks' Pride tumbler for 2019 will help you celebrate Pride with every sip, because it's decked out in show-stopping iridescent colors of the rainbow. I don't know about you, but I need this for my summertime coffee runs.

If you want Starbucks Pride tumbler, too, you're in luck. According to the company, the tumblers are available as of the week of May 13 in U.S. and Canadian Starbucks stores for $16.95. With that being said, find your local Starbucks and grab one while you can. I say "grab one while you can" because they're only available for a limited time while supplies last. Based off of how cute and timely they are, I'm going to assume that they're going to sell pretty quickly. (I can't predict the future, but that's just my guess.)

In order to find your nearest Starbucks in the U.S. or Canada, visit the company's store locator and enter your city information. Then, a list of nearby Starbucks locations will populate on your screen and you'll be one step closer to a rainbow Pride tumbler.

Now that you know where to get Starbucks' Pride tumbler (and how long it'll be available for), let's talk more about its gorgeous aesthetic. As you can see, Starbucks' Pride tumbler features a pinstripe design against a gradient rainbow background. The word "LOVE" is written in stripes against the eye-catching pattern, which makes it the perfect cup to drink out of during (and after) Pride Month.

Speaking of Pride Month, this tumbler is only one way that Starbucks is showing its support for Pride. In a statement via email, the company wrote,

Beyond the new Pride cup, Starbucks continues to be an advocate for the LGBTQ community and strives to create a culture of belonging, inclusion and diversity. In addition to health benefits for partners in LGBTQ relationship, the company has also supported partners who are transgender or considering transitioning, and even broadened health care coverage to include gender reassignment surgery.

Apparently, the company has even more up its sleeve for Pride Month's 50th anniversary, but its next endeavors haven't been announced yet (so stay tuned).

In the meantime, it seems like people are already enjoying the company's celebratory Pride tumblers.

Believe it or not, these Pride tumblers aren't the only colorful cups on the market. In fact, Starbucks recently released color-changing cold cups that literally change colors when they're holding a cold drink. Luckily, Starbucks stores in the U.S. and Canada will be restocking them throughout the season — so keep your eyes open for a five-pack.

Between rainbow Pride tumblers and color-changing cold cups, you'll be able to celebrate Pride Month with every Starbucks sip. Just keep in mind that Pride tumblers will only be available for a limited time.

More like this
What's In Kellogg's & GLAAD's Together With Pride Cereal? Expect Berry Flavors
By Daffany Chan
These TikTok Starbucks Drinks Include Barista Creations Like A Churro Frappuccino
By Cianna Garrison
Starbucks' Borrow A Cup Program Rewards Customers With Bonus Stars For Using Reusable Cups
By Daffany Chan
Stay up to date