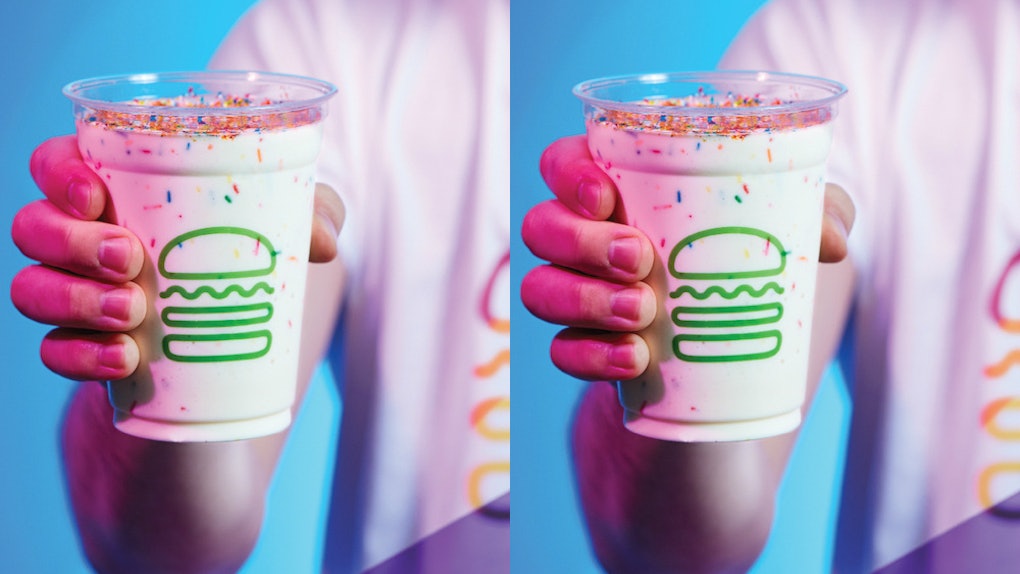 In my opinion, June is a seriously monumental month. It kicks off the start of summer, it might be your birthday month (if you're a Gemini or Cancer, that is), and — most importantly — it's Pride Month. And if you're craving something colorful in honor of the 30-day celebration, Shake Shack's 2019 Pride Shake is decked out in rainbow glitter sprinkles. To be quite honest, I've been waiting all year to try this.

For the second year in a row, New York City's beloved burger chain, Shake Shack, is — once again — offering its famous Pride Shake. If you weren't able to try the Pride Shake last year, it features a cake batter milkshake blended with rainbow glitter sprinkles, per the company. Yep, you heard that right, folks — not only does it feature every color of the rainbow, but it's also decked out in sparkles. You can snag one for yourself in-person, via the Shack app, or on the Shake Shack website at all U.S. Shake Shack locations (which excludes stadium, ballpark, and airport locations), between June 1 and June 30 for $5.69 each. If you ask me, it definitely knocks any old unicorn drink out of the park.

Wow, she really is a sight to see, isn't she?

If you want to wear your pride, on the other hand, Shake Shack also released a limited-edition Pride retail collection. As of June 1, you can snag yourself a crop top for $25, a classic tee for $20, a baseball cap for $20, a pair of Bombas socks for $14, and an acrylic rainbow burger chain from ISLYNYC, which just so happens to be the official jewelry sponsor of WorldPride. Each one is $150, and they are limited edition... so definitely get your hands on it before anyone else does.

TBH, that crop top and those socks are really speaking to me right about now.

Most importantly, though, Shake Shack is giving back to support the LGBTQIA+ community for the entire month of June. According to the brand, it is pledging a full $25,000 to The Trevor Project, a national organization that provides crisis intervention and suicide prevention services to the LGBTQIA+ community. All proceeds from the entire retail collection above will also be included with the donation, so if you were looking to donate in honor of Pride Month, this is definitely a solid start.

If you want to donate to more LGBTQIA+ organizations, there are plenty of options. Some organizations in need include the Gay, Lesbian, and Straight Education Network (GLSEN), which creates safe spaces in K-12 schools across the country; the Transgender Law Center, which works to change policies for everyone, regardless of their gender identity or expression; and the Human Rights Campaign (HRC), which represents the LGBTQIA+ community at work, at home, and in every community. There are are so many solid options, and now would be a great time to donate.

There is no denying that Pride Month makes June superior to all the other months, and Shake Shack definitely knows how to celebrate. Between colorful sips, the gorgeous retail collection, and more importantly offering the opportunity to give back, the chain is really bringing people together. So remember to wear (and drink!) the rainbow to celebrate anyone and everyone this month.