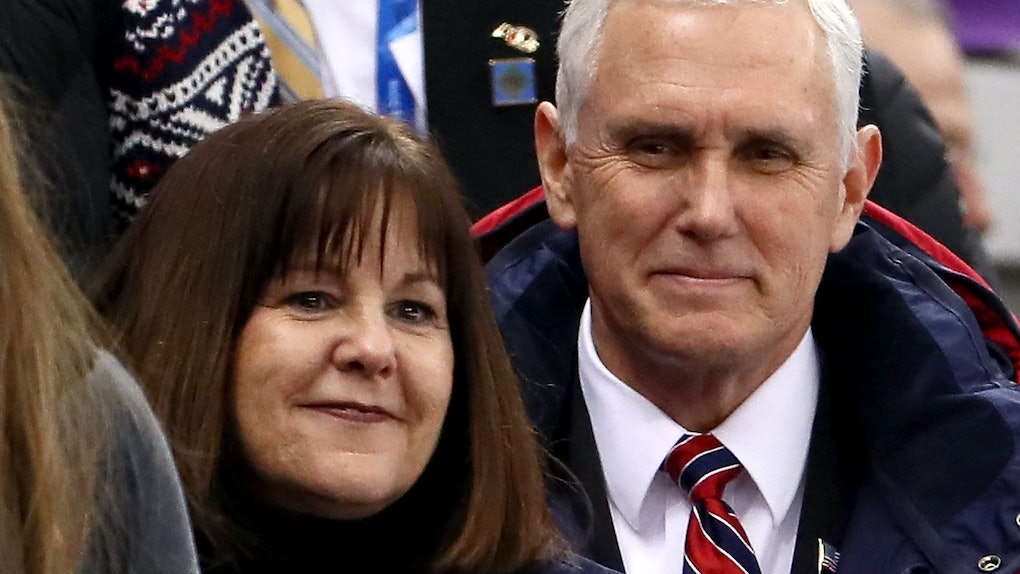 The news of Karen Pence's new job released a wave of opinions around the world — and they're not all that good. That's because she'll reportedly be teaching at a school that does not allow LGBTQ-identifying students to enroll and requires that its staff affirms that marriage should only be between a man and a woman — in 2019. If anything, it's only a reminder that there is a lot of work to be done in this world and that there is always something you can do to trigger more inclusive conversations and start taking action, like donating to LGBTQ rights organizations. Here are four LGBTQ rights organizations to donate to after Karen Pence's job announcement, because this matters.

In case you missed it, The Huffington Post published a story on Jan. 15 saying that Pence accepted a job as an art teacher at Immanuel Christian School, whose parent agreement says that a student can be expelled if they, or someone in their household, engages in or supports homosexual behavior. Elite Daily reached out to both Immanuel Christian School and representatives for the Pences for comment, but did not immediately hear back. Naturally, people had some feelings about this. Sarah Kate Ellis, president of the Gay & Lesbian Alliance Against Defamation, told the Post that Pence signing up to work at a place where children should feel safe (but also bans LGBTQ+ youth) is "disturbing," and stars like Cher have called out the second lady on Twitter.

But people have also come to her defense. U.S. Senator Ben Sasse (R-Nebraska) told Fox News on Jan. 16 that Pence simply picked up the job "to love thy neighbor through art," saying the criticisms are a "fundamentally un-American way to think." Her husband, Vice President Mike Pence said the criticisms are an attack on Christianity and are offensive to his family. "I have to tell you, to see major news organizations attacking Christian education is deeply offensive,” the vice president told Lauren Ashburn, of religious news source EWTN. "This criticism of Christian education in America should stop."

And for her part, Pence told USA Today that she is excited about teaching at the school, where she reportedly worked for 12 years back when her husband was a congressman.

Mm-hm. Well, if you're not exactly on board with these reasonings for banning LGBTQ+ youth and staff, here are a few organizations working to support the LGBTQ+ community who could use your help.

The Gay, Lesbian, and Straight Education Network (GLSEN) is an organization, founded in 1990, that works to create safe and inclusive K-12 schools in the United States. According to its website, eight out of 10 LGBTQ+ students are harassed at school each year simply because of who they are, but the organization works to change that and ensure that schools are a safe place to all students. GLSEN supports LGBTQ+ students by creating resources for educators to use in schools like anti-bullying initiative guidelines or best practices to support gender non-conforming youth, conducting research to identify problems and find solid solutions, and more. Want to help them out? Head here.

The self-harm rate of LGBTQ+ youth is frightening — per Reuters Health, LGBTQ+ teens are three times more likely than straight and cis youth to attempt suicide, with trans youth a staggering six times more likely. But The Trevor Project, founded in 1998, is here to help. The organization is best known as a 24-hour suicide hotline for LGBTQ+ youth, but it also provides a host of other services, including resources and support for youth in the process of coming out, training for allies, and online communities for those who are just looking for a little space to be themselves.

To help let LGBTQ+ youth know they are loved and appreciated, click here.

Since 2002, the Transgender Law Center has been working to to change "law, policy and attitudes so that all people can live safely, authentically and free from discrimination regardless of their gender identity or expression," per their website. They have a number of resources for trans youth, including a storytelling program for trans kids and teens to talk about their experiences, a guide for how to change IDs, and guides for how schools and educators can help support their trans students.

The Human Rights Campaign, which represents approximately 3 million people, "[envisions] a world where LGBTQ people are ensured equality at home, at work & in every community." The organization has a program, Welcoming Schools, dedicated to creating supportive LGBTQ+ and gender inclusive schools, working through school and district trainings on things like how to prevent bias-based bullying, how to help LGBTQ+ students feel accepted, and making sure that students' families — not just the students themselves! — are including in building a welcoming community. If this is something you're interested in, you can donate here.

Remember, these things start with you. Whether you've only got $1 or $10 to spare, anything helps.