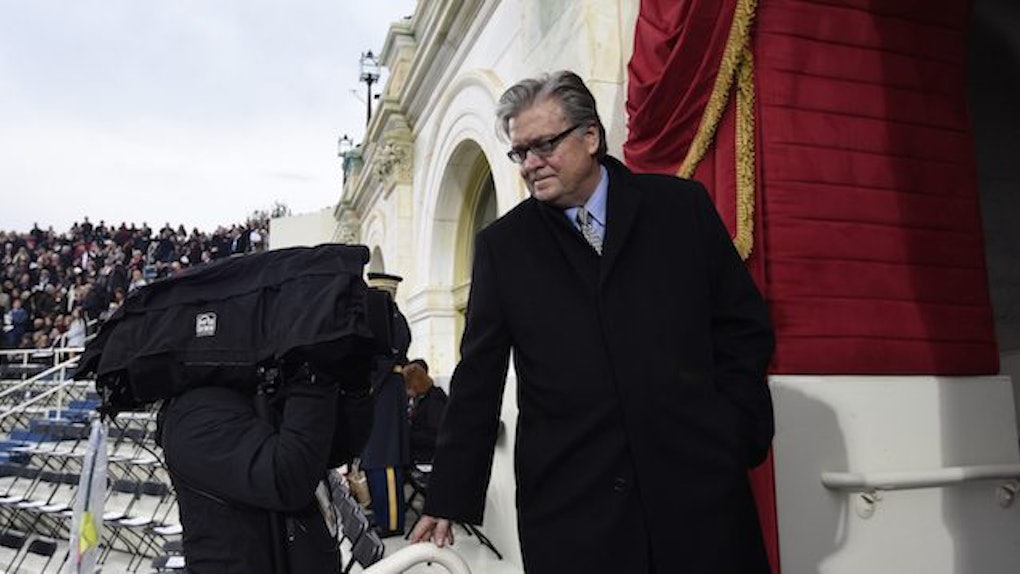 President Donald Trump's chief strategist, Steve Bannon, just made it abundantly clear he's waging a war against facts, or at least the facts that don't suit his agenda.

In an interview with the New York Times, he described the media as "the opposition party" and essentially told all reporters to shut up and stop doing their jobs.

Simply put, Bannon, the former head of the alt-right (neo-Nazi) website Breitbart, is tired of people fact-checking the Trump administration and calling it out for its seemingly never-ending lies.

Bannon said the media should be embarrassed by its coverage of the election,

The media should be embarrassed and humiliated and keep its mouth shut and just listen for awhile.

Did the media get a lot of things wrong about the election (especially Trump's chances of winning)? Yes, absolutely.

But, people in every profession make mistakes, and the 2016 election was unprecedented in so many ways. No one could've fully predicted the outcome or many of the events that transpired over the course of the election cycle.

We need people to hold the powerful accountable and call them out when they tell blatant lies.

First, Trump and his people decided to focus on the petty issue of inauguration attendance.

Spicer, in his first appearance as White House press secretary, bashed the media for its coverage of the event and claimed it was "the largest audience to ever witness an inauguration."

This is not true.

"Alternative facts" are not facts — they're lies.

To top it all off, President Trump and his administration claim there is mass voter fraud in the US (there is no evidence of this whatsoever), and he lost the popular vote to Hillary Clinton by nearly three million votes because illegal immigrants voted.

Just to be totally clear: Mass voter fraud is not a problem in the US. The true problem is mass voter apathy (not enough people vote).

In the 2016 election, just 55 percent of eligible voters participated. This is fairly embarrassing for a nation that is technically the world's oldest democracy.

Trump's claim he lost the popular vote due to mass voter fraud undermines the democratic process in America and makes it less likely for people to vote in the future because it erodes faith in the system.

Not to mention, it's just plain stupid to discredit the credibility of an election you won with falsehoods.

The frequency and nature of the lies the Trump administration continues to tell is deeply unsettling. We are entering a post-fact world, and it's not pretty.

But, much like the rest of the Trump administration, Bannon insists the media is the problem.

In his conversation with the Times, he said,

Mr. Bannon, we understand that Trump is the president of the United States, and are aware of the complicated array of factors that led one of the most unqualified presidential candidates in history to win an election.

What we don't understand is his insistence on telling mistruths and his habitual refusal to admit when he's wrong.

What we don't understand is why he sent his press secretary to lie to America's face on the first full day of his presidency and why his senior advisers insult the intelligence of the American people with "alternative facts."

What we don't understand is why you think you can win a war with people who are on the side of truth.

This will not end well for you. The media holds the government accountable, not the other way around.

Citations: Paul Ryan claims the US is the 'oldest democracy' in the world. Is he right? (PolitiFact), Voter turnout at 20-year low in 2016 (CNN), Trump Is Planning a Federal Investigation Into Mass Voter Fraud, Which Does Not Exist (Slate), Trump Strategist Steve Bannon Says Media Should 'Keep Its Mouth Shut' (New York Times)