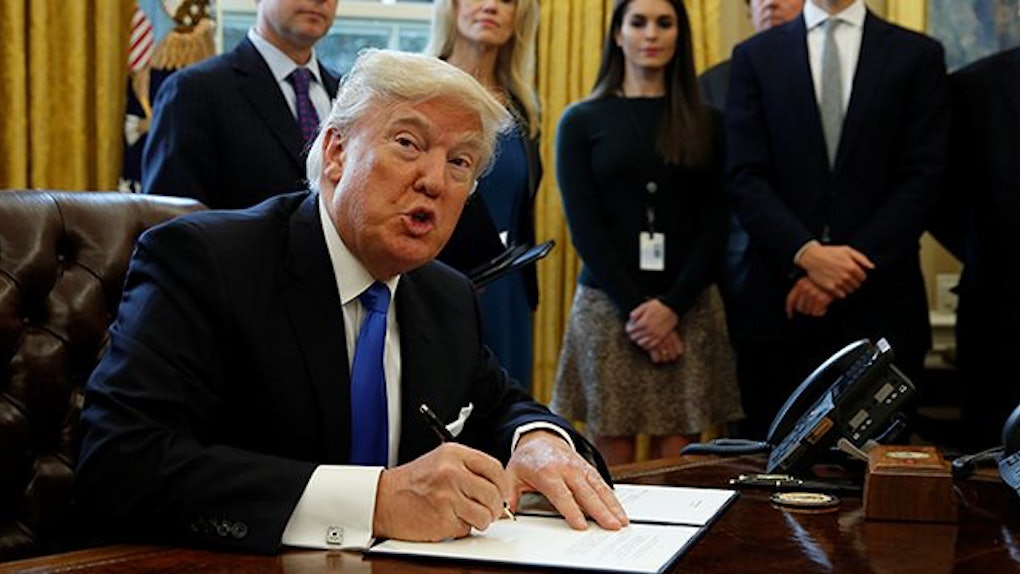 The Psychology Of Lying: Why America Lets Trump Lie

We've seen politicians bend the truth before. But we've never seen such blatant lies with statements that require so little effort to prove false.

It took whole investigations to find out Bill Clinton wasn't telling the truth about Monica Lewinsky. It took years of different events unfolding before Barack Obama's "if you like your plan, you can keep it" was named "Lie of the Year" by Politifact.

In contrast, Trump has pushed lies that were knocked down literally minutes after they were reported.

There's no reason we should expect any of it to stop, either.

Trump's political career was jump-started by a lie -- that Barack Obama was Muslim and non-citizen. And his lies during the campaign did not cost him.

And then there's the fact that, as Politico lays out, the psychology behind how lies are received by our brain actually works in favor of anyone willing to take advantage of us.

Harvard's Prof. Daniel Gilbert argues that even statements we know are lies are accepted in our brains, before we reject them. Gilbert writes,

In either case, our belief may last for only a moment before it is unraveled by reason. 'Is that really water in the road ahead, or is it just a mirage? Does she really love me, or did she merely say so?' If we comprehend words of love as we seethe gloss of dark water, then we may thinkingly reject the reality of either. But only after we have first accepted them as so.

Rejecting a statement as a lie is a mental exercise, while accepting it is triggered by merely hearing it, Gilbert argues.

Then what happens when someone is willing to test whether a group of people have enough mental stamina to reject a lie? Can someone establish their own truth just by saying it enough?

Psychology provides answer for that question, too: yes.

It's an effect called illusory truth, which, Politico again mentions, was first discovered in '70s via a joint research project by professors at Temple and Villanova Universities.

The present research has demonstrated that the repetition of a plausible statement increases a person's belief in the referential validity or truth of that statement.

In other words, as the saying goes, if you tell a lie often enough, it becomes the truth. And that's where Trump's appetite to lie becomes so dangerous.

In other words, as the saying goes, if you tell a lie often enough, it becomes the truth.

We've already seen him gain popularity, in part, by repeating questionable promises over and over (that wall will still be paid for by Mexico, of course).

But now that he's president, the stakes are raised. Now, there's a question of how far he can go if he establishes his "alternative facts."

Could he, say, actually attract support from top politicians around the (obvious lie) that millions of people voted illegally? And, if so, what exactly would the government do about this (non-existent) problem?

Of course, we don't know. But unfortunately, we might find out.