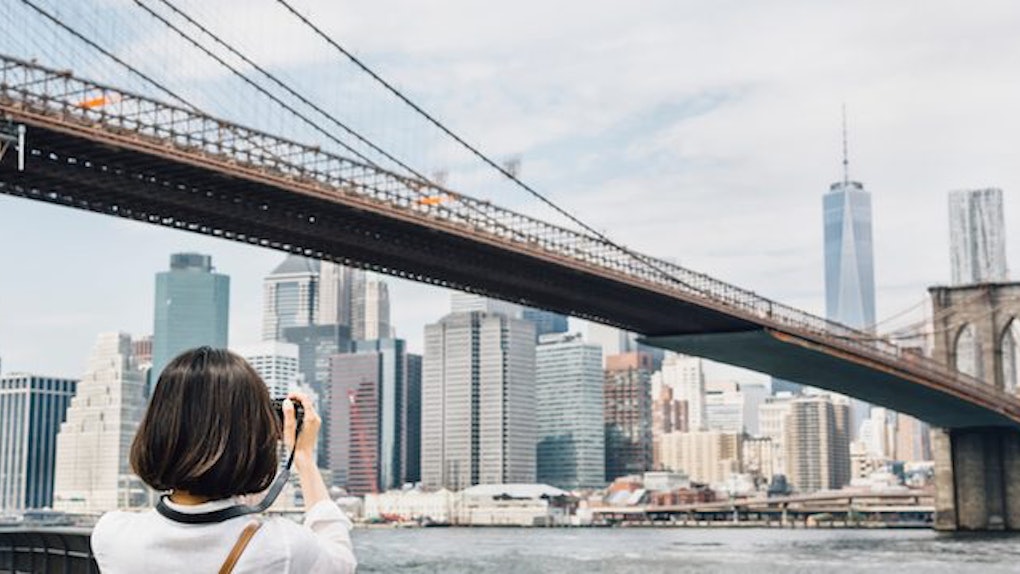 Inauguration Day Through The Eyes Of New York City

I'll never forget what it felt like to come to work on November 9.

When I woke up that morning, I had a familiar feeling. It was powerful enough to remember, even though I had only experienced it once before.

When a close member of my family had passed away, I remember waking up days after his passing to a feeling I had only previously felt in nightmares.

I'd wake up, look around my room and slowly remember where I was.

Then, it would hit me: He was gone.

There was a death in my family I'd never be able to replace. It was real: the hospital bed, the breathing machines, the goodbyes.

I'd wake up, slowly remember and wish I had just stayed asleep. This new life wasn't one I wanted.

The feelings of those earlier days of coping with death came back again on the morning after Election Day.

I'd wake up, slowly remember and wish there was a way I could wake up from the nightmare.

I left my apartment, and could barely look at the other faces on the street. I saw a woman wearing a burka and began sobbing. I saw a mother with a child and couldn't fathom what it must be like to have to explain to your toddler that hate had won.

The subway was silent.

People all had the same look on their faces. They were empty and defeated.

Later on at work, one of my co-workers posted a status that read, "Everyone at work today looks like they just got divorced."

The editors of Elite Daily sat in our lounge and watched Hillary Clinton give her concession speech. We sat in silence, with tears streaming down our faces.

We wondered how we would make it through the rest of the day. We focused on the coverage and content that needed to get out, and buried ourselves in our work.

Despite how unbearable the day was, by the end of it, I realized I was actually pretty lucky.

I realized I could not have survived this day if I was anywhere else in the country. I was lucky enough to be in a city where every single one of my co-workers felt the same way I did. We were defeated, but we were defeated together.

There was no gloating. No one was shouting, "Get over it already! Your feelings are invalid!"

Sure, New York City may be a sort of "bubble," given that we are predominately liberal.

But we are also one of the most diverse cities in America. We are liberal because we see women in burkas every day. Practicing Muslims are our neighbors, and LGBTQ+ people are found all over our friend groups; they are not the outsiders of our social circles.

New Yorkers aren't afraid of anything. So, we know how to identify hateful rhetoric and fear mongering.

We know judging someone for his or her religion, sexual orientation or income level is a product of ignorance. We are educated.

As many of us are forced to relive those feelings today – when Donald Trump becomes the 45th president of the United States of America – I thought I'd share a few reasons why the 8.5 million of us should all be thankful that despite it all, at least we get to live out Trump's presidency in the greatest city in the world.

One of the most progressive pieces of Obamacare, or The Affordable Care Act, was that insurance companies would be legally required to cover the cost of generic birth control to all insured women.

With Obamacare one step closer to being repealed – led by Speaker of the House Paul Ryan – New York state worked swiftly to ensure women would still have free and affordable access to all FDA-approved contraceptives.

The final vote to pass this act was 103-43, marking a landslide victory for women's rights.

2. NYC witnessed an al-Qaida inspired bombing, and promptly went to the bars anyway.

The fear of so many Americans became a reality in New York City on September 17, 2016, when a pipe bomb exploded in Manhattan on 23rd street between 6th and 7th Avenues, causing minor injuries and no casualties.

Within 24 hours, suspect Ahmad Khan Rahimi, 28, was in police custody. Rahimi was an American citizen, which is the case for most terrorist attacks on American soil.

However, after realizing there were thankfully no casualties in this attack, New Yorkers promptly resumed their everyday lives. In fact, most were annoyed the rest of the world seemed up in arms over the issue.

After all, it was a Saturday night: We had places to be.

3. NYC has Gay street, and Stonewall Inn is a national landmark.

New York was one of the first states to legalize gay marriage, under the Marriage Equality act passed in 2011. It wasn't until 2015 that gay marriage was recognized as a legal right in all 50 states.

The Stonewall Inn has been a staple in gay rights history. Police routinely raided the bar, as it was known for being a place where LGBTQ+ youth would gather to party and find a sense of belonging.

But on that particular day – June 28, 1969 – the LGBTQ+ community fought back, and the police force was outnumbered.

New York has long paved the way for gay rights and gay acceptance, and President Obama recognizing Stonewall as a national monument will secure its place in national history.

4. We were involved in the Black Lives Matter protests.

When New Yorkers know something is wrong, not even the most crowded city in America can stop them from turning out by the thousands.

It's been proven time and time again that racial bias training is a necessity for the police force. But until the rest of America listens, New Yorkers will be the first to take action against injustice in the black community.

Smartphones and live-streaming services have made it impossible to ignore deaths that have resulted at the hands of American police officers.

This was most evident by the exposure of the death of Philando Castile, whose girlfriend streamed the entire murder on Facebook Live.

5. There were several protests at Trump Tower.

Protests at Trump Tower haven't stopped since the president-elect won the Republican nominee.

In New York City, our mayor is literally leading these protests. In the age of "favors" and political promises, it's rare to see a political leader taking a strong stance and encouraging his citizens to take action.

On Election Day, Lady Gaga led these protests. And on the eve of Inauguration Day, celebrities like Mark Ruffalo, Alec Baldwin and Cher led resistance protests.

The Women's March on Washington is this weekend, and it's safe to say New Yorkers are not proud of its byproduct that is Donald Trump and the Trump administration.

We are making it clear Trump isn't welcome in his hometown: the place where New Yorkers' inherent values were somehow lost on this millionaire mogul.

I'll never stop being thankful to live in a city that protects my rights as a woman, and protects the rights of my friends and neighbors. And as someone who was born and raised in conservative Texas, the magnitude of my new life is never lost on me.

I cherish it, and will continue to cherish it every day. If you're lucky enough to call New York City home, I suggest you do the same.