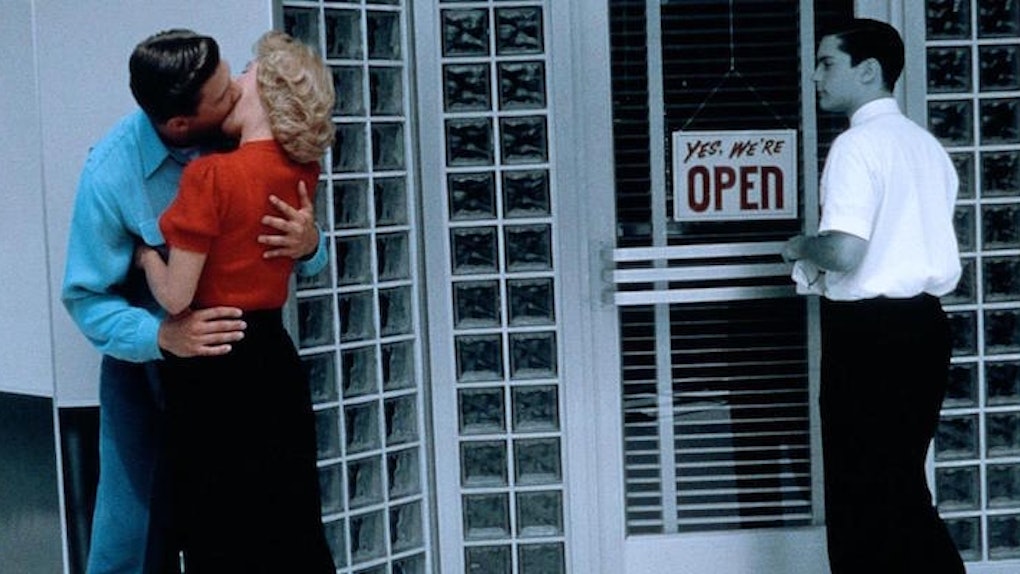 The first time I realized something was wrong was in high school.

I was sitting with my dad and watching a TV show with a gay character. Seemingly out of nowhere, my dad started talking about how disgusting it was. "Gay people deserve to die," he said. "They should all be shot."

Earlier that morning, we went to church. I loved going to church, and if I wasn't going with my parents, I often went alone or with friends and found another way to get there.

I hated to miss it. I loved the atmosphere; I felt like expressing gratitude for everything I was blessed with was cathartic, and I felt like everything would be OK when the pastor related biblical stories to everyday hardships I knew well.

As my dad made his comments, I thought of the gun I knew he kept in his dresser drawer. Once, he brought it out and asked me if I wanted to hold it.

I should hold it, he said, so I could get used to it. I watched him take out the bullets and point it at various things in our garage. I touched it, but refused to hold it by myself. It didn't feel like we should have it.

Soon after that, my church, like so many, began discussing its stance on homosexual worshippers. It claimed all orientations were welcome to worship, but practicing homosexuals would still be taught their way of showing love was a sin. I didn't want to protest my church, but I couldn't understand how a community whose main message is spreading love and acts of kindness for others could reject a group of individuals in any way.

After this, I learned being gay wasn't just something my local church had a say in; our entire national government was up in arms over it.

From there, I started researching what other bizarre things the government had control over, and that's when I discovered the topic that would change my life forever: abortion.

The few friends I have left from high school will tell you I was exactly the same then as I am now.

I went to a communications arts magnet school, which means it was a public school connected to a larger public school that specialized in liberal studies. I believe because we all elected to go to this school and cared about our studies, there was little to no bullying.

But even so, I was often called out for what I was wearing or saying. Once Forever 21 came to my city -- and we had options besides Hollister or American Eagle -- I started wearing more and more black.

Once I learned what abortion was, once I saw how women who were abandoned or who lived in poor communities were often forced to change their entire lives or go through dangerous, desperate methods of terminating pregnancies, I started saying I was pro-choice out loud.

Truthfully, I think saying abortion is murder is accurate, and sounds great when you say it out loud.

I can understand why some women would never get an abortion; I'm not sure I could ever get one myself. But I am not self-righteous.

I am not morally superior to another woman going through a dilemma. And I sure as hell wasn't going to let men and women who have never had to wonder where their next paycheck is coming from tell me that the government has a right to step into that very personal aspect of my life.

I am not morally superior to any woman going through a dilemma.

I refused to believe a woman who's barely out of high school, whose boyfriend abandoned her should have to live in poverty just so she can deliver the infant to full term.

I refused to believe a woman who is raped should be forced to mother a child she never asked for or wanted.

It's no secret Millennials are the least religious generation ever, and as someone who experienced the hate coming from an institution I once trusted, I can see why.

I haven't given up my personal religious beliefs, but I no longer worship with a group of people who have hate for so many causes. It's blatant hypocrisy to teach people to love everyone -- except gay people, women who get abortions and anyone who tries to take away our guns! That's un-American!

I know what it's like to be the only person in a room who's questioning everything, and if that's you right now, I want you to know you're important.

People like you are the reason other people will eventually feel comfortable enough to question the status quo as well. Just look at what happened in my home state when Wendy Davis spoke in a 13-hour filibuster to legalize abortion and legitimize women's rights.

Of course, Texas is largely conservative, but when Wendy started speaking up, women whose beliefs aligned with hers came out to support her in droves. Davis unleashed a community of activists who previously didn't see change as an option, so they stayed silent.

I know it may feel like you're the most misunderstood person in the entire world, but your strength to challenge reality is what makes you necessary. So what can you do when you feel overwhelmed by hateful groups or an environment in which everyone is calling you crazy?

When people make judgments, they often only see one side of a story. It's easy to call abortion murder when you aren't thinking about the economic hardships making it illegal would have on our society. Try to show people there are multiple sides to every story. Know what's fact and how to back it up if you need to.

2. Listen to the little voice in your head saying something is wrong.

In college, I learned the economic impact of illegal immigrants on America. Without this labor force taking jobs most Americans don't want anyway (think restaurant busboys, factory line workers), our economy would crumble.

Most people wouldn't be afraid of immigrants if they actually knew how they got to America in the first place. If you feel like you're witnessing unfounded hate directed at a large group of people and can't understand why, try to find out more about it.

Try to get others excited about change -- just like the women who stayed silent over women's rights before Wendy Davis excited them.

It's easy to think nothing will ever be different in your state or hometown, but by showing others change is possible and that there are more people who think like they do, you can incite a chain reaction.

Start with volunteering to register people to vote who have given up on our system.