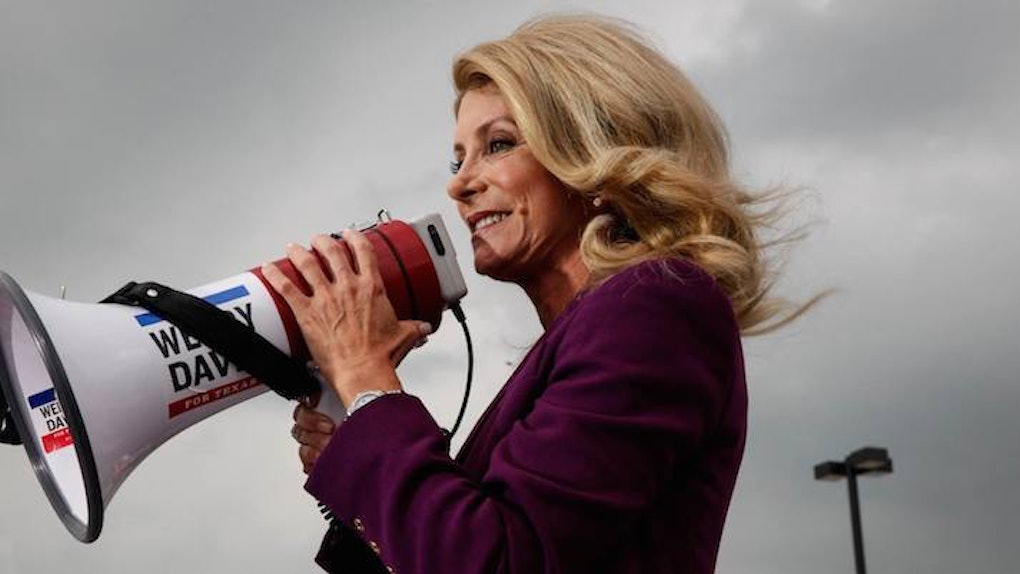 How do you write about Wendy Davis without getting emotional?

And as a woman, how do you write about something emotional without getting written off for being on your period?

You see, in politics, emotions are not only a good thing, they are necessary.

They're how we gain the courage to speak up when something in our world feels wrong. They're how we begin to understand people who are not like us. Emotions are how -- when a national tragedy occurs -- we come together and become selfless.

Despite what anyone may say, emotions and empathy link us as humans. It's only when these emotions turn fiery, and spread to the brink of hate, that there's something to worry about.

In June 2013, I was an ex-Texan living in New York City for the first time.

Hearing the initial buzz surrounding Wendy Davis' epic 13-hour filibuster combating dangerous and restrictive abortion rights in Texas was like finally putting a face to a voice I heard, but never knew how to speak to.

It was a voice that, until then, I never knew had a vital place in a public forum.

It certainly didn't seem possible that Davis' voice could live strong in Texas of all places, so right away, I knew she was going to be a force to be reckoned with.

And two years later, she still is.

After a tough fight in the 2014 Texas gubernatorial race, Wendy Davis moved on from her role in the Senate, but has been unable to leave behind the issue most dear to her: women's rights.

When asked what she'd do with one wish from a magic wand, Davis said she'd instantly grant women equal rights.

Her wish makes sense, considering Davis is currently working to launch a women's equality initiative, which is still in its planning stages.

It is my hope to start an organization -- I'm working quite hard on it now -- to engage Millennial women in the political process, and to help people understand the incredible value of their voice in politics.

Davis' plan sounds great. As we've seen time and time again in American history, nothing good ever comes from holding people back. So then the question becomes this: How do we make people listen to this movement?

How can women speak without being written off, called names or judged for their looks?

As someone who writes about politics, I couldn't help but ask Davis what she thought the most effective way to get through to someone was, when sometimes even trying seems impossible.

I really believe it's through storytelling. Real stories of real people because -- and I'm guilty of this myself -- we throw out these statistics, like I did earlier: 150,000 million women lost their healthcare, it cost tax payers 136 million dollars in increased Medicaid costs. I think Americans are kind of just done with all that, right? Those numbers wash over us, and we're numb to it. But when we put real faces on these problems, we put real lives and we show the impacts these decisions are making. I think that's when we have our most succesful conversations.

Women, when speaking of their experiences with reproductive rights, are often taught to feel shame. Shame is a reflective word, prompting one to speak of or look into one's self.

But after hearing about the House passing a federal funding ban on Planned Parenthood, women are feeling plenty of shame, and it's all directed at our government.

In true Wendy Davis fashion, I've compiled a few stories of real women who have used Planned Parenthood services. Spoiler alert: None of them happened to use it for abortion services.

These stories represent the one in five women who turn to Planned Parenthood for cancer screenings, birth control and medical consultations.

These stories represent the importance of a program that has taught women it's okay to take control of their own bodies and futures.

Here are just a few:

When I was in high school, I didn't have access to confidential and affordable birth control, emergency contraception or STD testing. For the four years I went to Planned Parenthood, all of these services (and more) were available to me for free or at a low cost. Nurses and doctors taught me about the importance of receiving the HPV vaccine, what birth control method was best for my body and how to treat and avoid common vaginal infections, such as UTIs and yeast infections. I learned more about sexual health and practicing safe sex at Planned Parenthood than I did at my own public high school, where abstinence was the law of the land. I cannot even fathom what would have happened to me if Planned Parenthood would have been defunded when I was 15, if I did not have a such a safe, accepting and knowledgeable healthcare organization in my corner. — Aly, 23

It doesn't matter what your political beliefs are, this organization single handily helps and aims to prevent unwanted pregnancies. They also save lives. They saved my life. I went to a Planned Parenthood to discover I had pre-cancerous cells on my uterus that if not discovered then and there, could have turned into something way worse. This organization needs us, there are women (and many men!) out there who need this organization. Please don't let your stance on abortion stop your support of an organization that does SO MUCH more than just terminate unwanted pregnancies. The men and women who can't afford healthcare shouldn't be punished because of someone else's political beliefs. — Bethany, singer and guitarist for the band, Best Coast

My mother shut down the birth control conversation early. She is a strong non-believer in putting hormones into your body. I went through all of college just kind of hoping that nothing would go wrong with the over the counter options for birth control. After I graduated, I moved to the city and realized I had total access to whatever I needed in the form of Planned Parenthood. It was an amazing revelation. I scheduled a consultation and they went over all of my options with me. When they were certain that I knew what I wanted, we scheduled an insertion appointment. IUD insertions are not exactly a blast, and I was a nervous patient. They recognized this and made an effort to make me feel more at ease. I started panicking a week after the insertion and became convinced that something was dramatically wrong. When I showed up at the center in full on tears over the fact that they had no appointments open, and I absolutely needed to see someone, they were so kind and found a slot for me. They did a follow up exam on the spot even though I wasn’t supposed to have one for another month. Planned Parenthood essentially removed any element of stress from my birth control process, both the decision making and the actual insertion.  — Emmery, 24

I lived in Austin when I was 18 to 20 years old, before they changed the health insurance age to 26. I got my birth control from Planned Parenthood because it was $25 dollars a month. (You had to go and get it every single month.) I "bypassed" the pelvic screening, but they were always very nice. The nurses knew more than my OBGYN. And it was my male OBGYN who told me to go to PPH because it was cheaper. Also, I always felt like the only young woman in the waiting room. Everyone else who was waiting were moms, pregnant women, and there were babies everywhere. I remember mostly Hispanic families. It was obvious this was so much more than a free birth control center. This was a place full families turned to for help and medical support.