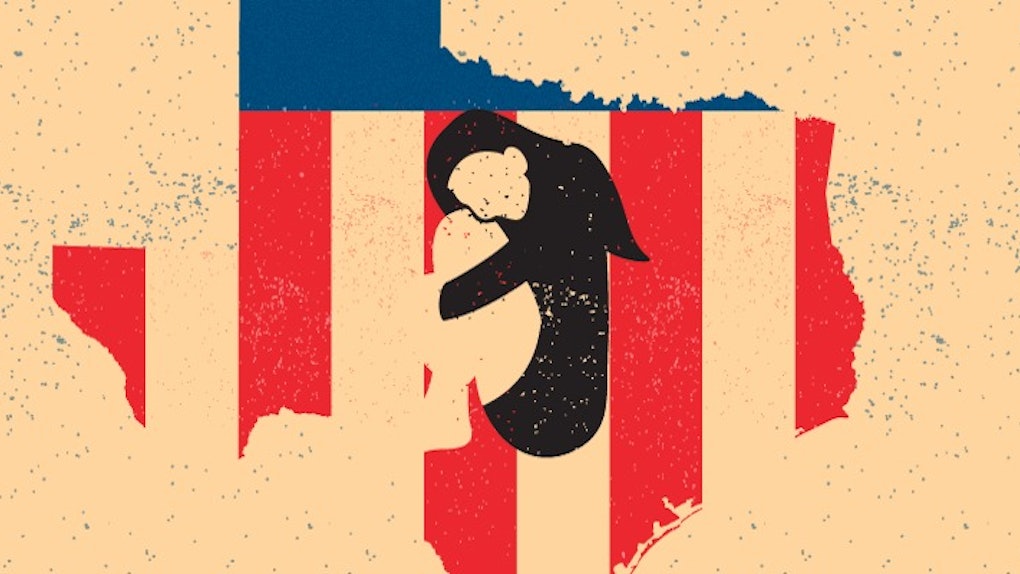 Candice Russell almost wasn't born.  Her mother was 14 years old and at an abortion clinic when – “for some reason” – she decided to carry the fetus to term rather than abort.

Her mother's decision was on her mind when Russell, now 32, decided to get an abortion in her early 20s after her birth control failed.

My mom didn't want to parent. I was never really parented. She oftentimes would tell me that I was the reason that she wasn't successful, I was the reason she couldn't be the person that she wanted to be... I knew when I got pregnant the first time that I didn't want to do that to a child. I didn't want to, knowing what I knew, put my child through that. If I ever had a child, I wanted it to know that it was loved and wanted and that I, at the time, had the capacity to parent. At the time, I didn't.

These experiences moved her to testify in front of the Texas State Senate in 2013.

A lot of people speak about being “abortion survivors” like Russell. But most talk about how life is a blessing, and therefore abortion should be illegal.

While Russell is happy to be alive, she recognizes that her mother's choice was valid, just like her own choice to have an abortion was valid. She wanted that opinion to be heard by the Texas State Senate.

The Senate was arguing what would soon become House Bill 2 (HB 2). It is now being argued by the Supreme Court in the case, Whole Woman's Health v. Hellerstedt. The bill says that abortion providers must have hospital admitting privileges and meet the requirements of an ambulatory surgical center.

Neither of these requirements is medically necessary. But they caused over half of Texas's abortion clinics to shut down. Should the Supreme Court let the law go into full effect, there will be just nine clinics left in the entire state.

Russell was living near Dallas and following HB 2 from a distance. But at a certain point, she decided she had to do something.

She drove to the State Senate in Austin three or four times, and on the last trip, she told her story. Russell was one of hundreds of women who went to protest the bill at the Senate, telling them how abortions positively affected their lives in a people's filibuster.

Despite their efforts and a filibuster by Wendy Davis, HB 2 became law.

Russell was disappointed, but she never thought the law would personally affect her.

She was recently divorced and dating someone who lived in California. She had an IUD.

But birth control had failed her in the past. Russell became pregnant at age 30. Because she wasn't getting her period with the IUD, she didn't realize she was pregnant until she was about 12.5 weeks along in February 2014.

Russell had recently split up with the man in California, and she knew she did not want to be a mother. She made the decision again to have an abortion.

Clinics in Dallas were still open and providing abortions. But because of HB 2, many other clinics had shut down. So, women were flocking to the remaining clinics.

That meant that Russell would've had to wait almost three weeks for an appointment to get an abortion.

On top of that, Texas has a 24-hour waiting period, where you come in for counseling. Exactly 24 hours later, you can get an abortion.

Russell knew that her job could easily get in the way of a two-day process like that. Even if she put in time off, her boss could have threatened to fire her if she didn't come in.

She thought about her options. She could wait three weeks for an appointment, only to have to miss it on the day because of work. Then, she would have to wait another three weeks.

At that point, she would be coming close to yet another Texas law: a ban on abortions after 20 weeks of pregnancy.

Rather than risk that, Russell decided to go to California to get an abortion. She called a provider there and got an abortion within the week.

This means she went to California, got an abortion and came back all before she would've been seen for her first appointment in Texas.

Aside from the barriers to get the abortion, Russell is frustrated that she became pregnant in the first place.

This is just another way in which women are not in control of their own bodies.

When Russell was married, doctors told her not to get permanent birth control because her husband might change his mind and want children one day.

When Russell was divorced, doctors told her not to get permanent birth control because she could meet a man who wouldn't marry her unless she could have his children.

Instead, she was given the IUD that ultimately failed.

From following the HB 2 fight, Russell knew that the next argument pro-life people would make was she could have the child and put him or her up for adoption.

But first, the pregnancy would be hard on her body. Second, after having worked in the foster care system, Russell – who is Latina – knew adoption wasn't an option:

I'm a brown girl with a history of drug addicts in my family. Nobody's going to adopt my baby. The percentage of brown and black babies that sit in the foster care system is staggering. So that argument just bores me.

Thanks to the costs for flights, lodging, car rental and the procedure itself, Russell's abortion in 2014 cost her about $3,000.

She had to take out a pay day loan to cover the costs. She was in debt for a year and a half, paying it off at a high interest rate because it was an installment loan.

Despite the high cost, Russell knows she's lucky to have been able to do that. Many other women in her position would not have had the resources.

I don't think that your economic status should determine whether or not you're able to access legal and safe healthcare.

When she wasn't sure if she would be able to get the pay day loan, Russell thought about her other options.

She started looking into ways to self-induce an abortion, including getting the abortion pill and inducing one at home.

More and more women in Texas and across the south have turned to this method. Women are even crossing the border to Mexico in order to pick up the pill, where it is readily available.

Russell said this prospect scared her “a little bit, even though I was more educated on it than I think some people are.” But she knows if she hadn't been able to get the abortion, she would've done it.

Russell's experiences made her more dedicated to pro-choice activism.

Since she spoke in front of the State Senate, Russell has become more involved in the abortion rights movement.

Her story was one of many that were sent to the Supreme Court in amicus briefs, in order to explain the damaging effects of HB 2. In the brief, she talks about the women of the Rio Grande Valley on the Mexican border.

There is just one clinic currently open there, in McAllen. It is only open because of a court order to serve the women in that region.

Russell said in the brief,

People in the Rio Grande Valley for the most part cannot just get on a plane and travel 1,500 miles away to have an abortion. I am a very lucky woman to have been able to do what I did.

Russell has worked with NARAL Pro-Choice Texas and their Next Generation program. She is inspired by the reproductive justice framework, which looks at the intersection of gender, race and economic status.

In other words, it's not white girls on college campuses, speaking in overwrought academic terminology.

Women of color have increasingly been at the forefront of the fight for reproductive rights, especially since they are more affected by a lot of the anti-abortion legislation, like the Hyde Amendment.

When HB 2 passed, Russell never thought it would affect her personally. But because of it, her life changed. Through facing down its barriers, she has become a fighter for women like herself.

This is what I want to do with the rest of my life.