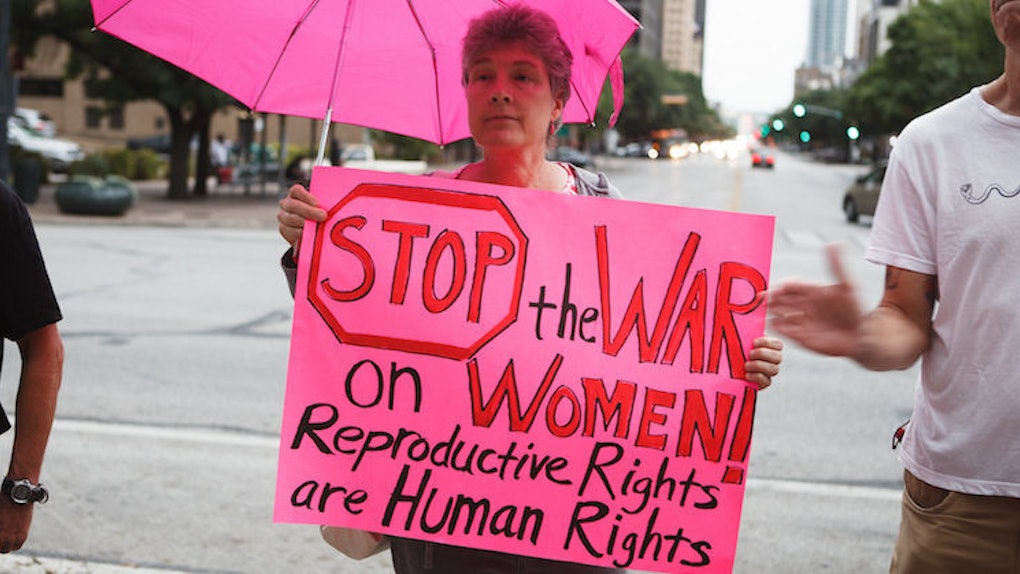 The Supreme Court is hearing what could be the most important case on abortion in our lifetime.

The case is Whole Woman's Health v. Hellerstedt (formerly Cole), and although this is a mammoth moment for abortion access that could impact you, there's a large chance you don't even know about it.

In a new Vox poll, only 15 percent of respondents said they heard about the case -- despite just how many times we have tried to tell you about it.

So here's the thing: I really need you to care about this case. It's being heard in the Supreme Court on Wednesday, March 2, will be argued by Stephanie Toti and there will be a rally going on outside. The decision is to be announced in June.

Let's get to the specifics.

You might remember when Senator Wendy Davis held an 11-hour filibuster in pink sneakers in 2013. Despite her best efforts, Texas' HB 2 bill was signed into law.

It has two parts:

The law has been challenged, and now the Supreme Court is determining its legality.

Before this law passed, there were 41 abortion clinics open in Texas. Now, there are 18. Should the Supreme Court allow the law to stand, fewer than 10 clinics will be able to stay open.

The admitting-privileges part of the law is in effect, but the Supreme Court temporarily blocked the ambulatory surgical center requirement.

The average Texas county is 111 miles from the nearest abortion clinic, The New York Times reported last August. Should the law stand, there would be no clinic from San Antonio to the New Mexico border.

There has been an increased concern for women attempting self-induced abortions in desperation. A black market exists for abortion pills. For many Texas women, it's easier to go to Mexico and get an abortion pill than reach a clinic in the state. These are not safe options.

Lawmakers say these requirements are for women's health.

I'm not going to sugarcoat this: That is complete and total bullsh*t.

The American Medical Association and the American College of Obstetricians and Gynecologists said the requirements are medically unnecessary.

Abortions are remarkably safe procedures that can be done in a doctor's office. The mortality rate is considerably lower than that of childbirth. Guess which is more highly regulated.

As John Oliver pointed out, abortion has a lower mortality rate than colonoscopies. And yet, Texas isn't requiring colonoscopies to happen in ambulatory surgical centers with hospital admitting privileges.

Ambulatory surgical centers have things like super wide hallways, specific humidity levels and large room sizes -- none of which are necessary for the simple abortion procedure.

When I visited the Cherry Hill Women's Center in New Jersey, which is an ambulatory surgical center, I had to put on shoe covers, a smock and a surgical hairnet just to step into the hallway.

When you see all of the equipment and all the space and all the temperature and humidity guidelines that I'm required to keep up, it doesn't make the abortion safer. It just makes it more costly.

Turning a facility into an ambulatory surgical center is extremely expensive, which is why so many Texas clinics have had to shut down.

Hospital admitting privileges are an even more bullsh*t requirement.

It's difficult for abortion providers to obtain admitting privileges as so few women need hospital services, so hospitals don't want to bother, especially since it touches a controversial topic.

Medical ethics and regulations require a hospital to treat any patient who shows up there. Have you ever been to a hospital that didn't treat you because you didn't have admitting privileges? I didn't think so.

These laws put women in danger.

Aside from the danger of self-induced abortions -- from women physically harming themselves to using black market drugs to trying home remedies -- this hurts the women who can actually make it to a clinic.

Aside from the literal costs, including days off work, travel and childcare, women face health costs because of these laws.

The remaining clinics are now backed up trying to meet the demand for abortions. This means women have to wait longer to get an abortion. This means they're at later stages in their pregnancies, which increases health risks.

OK, I get it, these laws are dumb. But how will the Supreme Court see it?

In 1992, in the case Planned Parenthood v. Casey, the Supreme Court decided states can regulate abortion, but they cannot put an “undue burden” on women.

This case could specify what an “undue burden” really is. Following the Casey ruling, the justices should be looking at burden versus benefit. The benefit of Texas' laws, as we've discussed, is nothing. The burden, however, is huge. So technically speaking, this case should be pretty clear.

Justice Antonin Scalia's death changed the balance of the Supreme Court, but it didn't change this case all that much.

The deciding vote will come from Justice Anthony Kennedy. Kennedy has gone back and forth on abortion. He voted to protect rights in Casey but against them in the 2007 Gonzales v. Carhart case.

In that case, Kennedy wrote women regret their choices to get an abortion. This is likely why so many women told the Supreme Court they do not regret their abortions.

If Kennedy votes to keep the Texas bill, there will be a 4-4 tie in the Supreme Court.

Ties go to lower courts, which said the bill was legal, and so all but 10 abortion clinics in Texas will close.

This will have repercussions. A similar law enacted in Louisiana last week will have a stronger standing, leaving only one clinic in that state. Meanwhile, next door, Mississippi's one remaining clinic will be on shakier ground as courts argue whether a hospital admitting privilege requirement is legal.

In other words, it's possible a whole swath of southern states will completely lose abortion access.

But a Supreme Court tie doesn't set a precedent. So, courts can continue arguing these laws, and it's probable another one will end up back in the Supreme Court.

Should Kennedy vote against the Texas bill, these requirements will be struck down.

Clinics in Texas will then begin the process of reopening. The laws in Louisiana, Mississippi and other states will be on shaky ground and abortion access will be able to open up again.

It will decide if anti-abortion legislators can take away our fundamental right to abortion. It will decide if low-income women will continue to be held back by condescending laws. It will decide if politicians can keep up the farce of pretending to give a sh*t about women's health when they're actually just hurting women.

It will decide if women in America -- low-income women, women facing devastating health news, teenagers, women of color, mothers, women in abusive relationships, women who really want to have a baby but just not yet, women who never want to be a mother at all, all women -- have the opportunity to own their lives and come closer to real gender equality.

The case is being argued in the Supreme Court on Wednesday. The decision will be announced in June.

Citations: Most Americans oppose the Texas abortion laws being challenged at the Supreme Court (Vox)