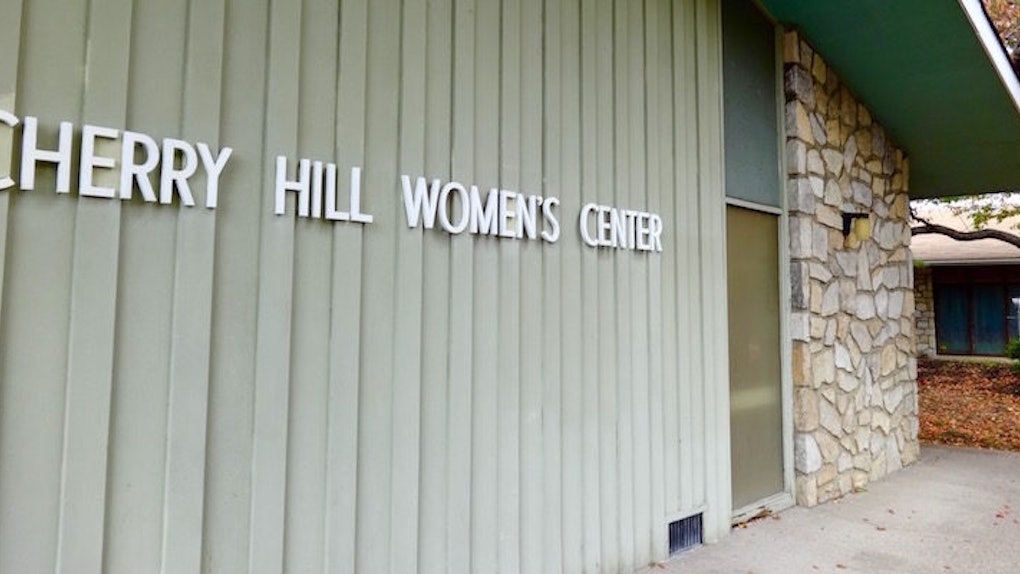 Safety Versus Access: What The Supreme Court Means To Abortion Clinics

The protesters make it easy to find the clinic.

The Cherry Hill Women's Center, the only clinic that provides surgical abortion in south Jersey, is otherwise indistinguishable from office buildings along a local highway.

As you walk in, the group calls out to you, saying you would be happier if you joined them. They tell you they love you. They chant Hail Marys, emphasizing that blessed is the fruit of thy womb.

Twenty years ago, the protesters I interacted with would be spewing vile things at us, trying to block entry to the clinic. The shift that we're seeing now is that oftentimes they're protesting with 'love.'

This is worrying, Groves explains, because there are still occasional instances of more aggressive protests, but she never knows when or what to expect.

The protesters are just the final hurdle women have to cross to get an abortion.

Compared to the rest of the country, New Jersey laws on abortion are pretty lax.

The Cherry Hill center provides first and second trimester abortions up to 24 weeks and six days into a pregnancy. Low-income New Jersey women can pay for an abortion through Medicaid in the state.

Minor patients do not need a parent's informed consent (which can be difficult with an abusive, incarcerated or absent parent) or a judicial bypass to get an abortion.

But 10 minutes away in Pennsylvania, abortions are performed up to 24 weeks, Medicaid does not cover abortions and patients have to take each of the restrictive steps.

Because of the relative ease with which women can get an abortion in New Jersey, many travel to Cherry Hill for their procedures, mostly coming from Pennsylvania along with Maryland and Delaware -- but the clinic has seen women from as far away as Indiana and Georgia.

The Supreme Court announced on Friday it has decided to take on a case deliberating how constitutional laws are that end up restricting women's access to abortion services.

Roe vs. Wade determined states can not make abortion illegal in 1973, but states can and do make their own laws about how abortions have to be administered.

The Supreme Court picked up Whole Woman's Health vs. Cole.

The decision the justices make has the potential to be a landmark precedent for abortion access in America.

Whole Woman's Health vs. Cole is from Texas and was initially made famous in June 2013 when Senator Wendy Davis filibustered a bill while wearing pink sneakers.

Texas's HB2 law, which Davis tried to block, has provisions stating abortion clinics must have admitting privileges at a hospital within 30 miles and must meet the standards of an ambulatory surgical center.

These bills are what pro-choicers call “TRAP” laws: Targeted Regulation of Abortion Providers. They're ostensibly put in for safety reasons, but the end result is women have less access to abortions.

The admitting privileges requirement caused the number of Texas clinics to drop from 41 to 18.

The ambulatory surgical center requirement is on a Supreme Court stay -- meaning it can't be enforced unless the Supreme Court decides to allow it -- but would cause that number to drop to 10.

Although these requirements seem small, they create major problems for clinics.

It's difficult to obtain admitting privileges. Many hospitals don't want to be involved for ideological or controversy-avoiding reasons, and many doctors are out-of-state, creating an obstacle to forming relationships.

The reasoning behing the requirement is unclear in the first place -- anyone can be admitted into a hospital ER, regardless of official admitting privileges.

Moreover, abortions are generally safe procedures and have a markedly lower mortality rate than that of childbirth. Very few people have to go to a hospital due to abortion complications.

Converting a clinic into an ambulatory surgical center, and subsequently running one, costs a ton of money clinics do not have.

The required conditions of an ambulatory surgical center are not necessary for an abortion procedure, which -- especially in the first trimester -- is fairly quick, simple and safe.

The Cherry Hill Women's Center is licensed as an ambulatory surgical center due to requirements for second-trimester abortions in New Jersey.

A patient goes through several steps before getting an abortion. First, you call the advocacy center to set up an appointment and talk over relevant issues, including funding and insurance coverage.

The advocacy center serves women's centers in different states, so the staff has to code switch between state laws.

After you walk past protesters into the center, a security man checks your name on a list. In the morning, the waiting room is packed with women, some with partners and friends, others alone.

A quote by Dr. George Tiller, who provided abortions and was murdered for it in 2009, is framed on the wall.

You are given an ultrasound and lab tests to check for medical issues that would make an abortion unsafe and then go to a nurse for a medical history and physical.

Then you speak with a patient advocate again. Conversations range from financial needs to resources for domestic violence and substance abuse.

All of this is done in what looks like a gynecologist's office.

The hallways have colorful brochures, and walls in patient advocacy and exam rooms have quotes by women painted on them.

There is soft lighting and plants. The staff is friendly and laughs easily with each other. Some patients laugh with them.

But when you go in for the procedure, the feeling changes.

At this point, you go into the ambulatory surgical center side of the building. You step into a sterile white hallway, marked only by silver cabinets and trays. Staff wear scrubs, hair nets and shoe coverings.

The operating room is huge and cold -- physically and atmospherically.

Groves, the executive director, worked in Philadelphia until she moved to this center two years ago.

The [operating rooms] are going to be six times the size of ORs in Philly. In Philly they look like exam rooms. Here, it looks like you're in a hospital. Some people might think, 'Oh, that means it's a safer procedure.' But I can tell you that it's not. You can do an abortion in this room [her small office] safely … So when you see all of the equipment and all the space and all the temperature and humidity guidelines that I'm required to keep up, it doesn't make the abortion safer. It just makes it more costly, which is why we're the only clinic in south Jersey.

While legislature makes the cost of running a clinic increase, the cost of an abortion to women has not risen.

The cost between 1983 and 2009, adjusted for inflation, “has remained relatively stable over time,” according to the Guttmacher Institute.

We're helping poor women. We can't make the cost of our procedure beyond the reach of people. No matter whether you're non-profit or you're for-profit, you're in this for heart. You're in this for a reason. You can't price yourself to the point where people can't access procedures.

About 65 percent of Cherry Hill patients are on Medicaid, Groves said, which gives the clinic a fractional reimbursement for abortions (contrary to pro-lifers' argument that clinics reel in profits).

It's a constant struggle to run a clinic of this size in New Jersey. But I'm really glad it's easy for women to get an abortion. That's so cool, you know?

While clinics and funds do what they can to keep prices down, legislature often necessitates more spending from patients.

Supporters of the laws in Texas have argued if an abortion clinic shuts down, women can just go to another one.

Then, the court said the state “may not impose unnecessary health regulations that present a substantial obstacle to a woman seeking an abortion.”

New laws and shut-down clinics cause a ripple effect. The remaining clinics now have to serve more patients, which means you may have to wait longer to get an appointment, putting you in a later gestation period and raising the cost of your procedure.

After a clinic closes, a hospital may be your only nearby provider -- which will have higher costs.

Or you can go to another state for a procedure. As Groves said:

And if you're traveling for a second-trimester abortion, which is a two-day procedure with anesthesia, you're going to need to get someone to come on the trip with you to drive you back from the clinic.

There are so many obstacles to get an abortion clinics have to regularly inform patients abortion is legal.

You can't look at how things are happening across the country and do what I do for a living and not be worried for women. You just can't.

There are also non-legislative obstacles. Roxanne Sutocky, a patient advocate at Cherry Hill, said she has heard from patients whose insurance companies tell them abortion isn't covered when it is and whose primary care doctors refuse to refer them to a clinic.

It's a normal part of women's healthcare to have an abortion, but when it's something that's pushed so far away from people they literally have to drive states away to get to it, it kind of makes it seem like something that's not normal.

Women are still making it to the clinic -- Cherry Hill performs 6,000-7,000 abortions every year -- but Sutocky worries about how far patients can be pushed:

We have people coming in that see all these crazy laws and are jumping through all these hoops and don't even acknowledge that's unfair for them and they shouldn't have to do that. But the worse and worse and worse it can get, people still aren't going to necessarily realize that. I feel like what winds up happening is you can push people into situations that aren't safe. What happens when there's only one clinic left in New Jersey and we don't have the availability we have now and patients are looking into services that are illegal or unsafe or just aren't getting the care they deserve when they choose to have an abortion?

She was working at the University of Pennsylvania hospital when a woman died from a botched abortion by Kermit Gosnell, who was sentenced to 30 years in prison.

I mean, what does it look like? It looks like unsafe care. It looks like people are preying on women who can't afford abortions. It looks like child abuse. It looks like drug addiction. You know what I mean? It looks ugly when people can't get their abortion. If a woman knows this is not the right time for her to have a baby, she knows. We really need to trust that. Because, I care -- I care about this world. I want children to be valued, and I want them to be loved. If you can't get a very much desired abortion, it looks ugly.

The Supreme Court decision will be announced next June.