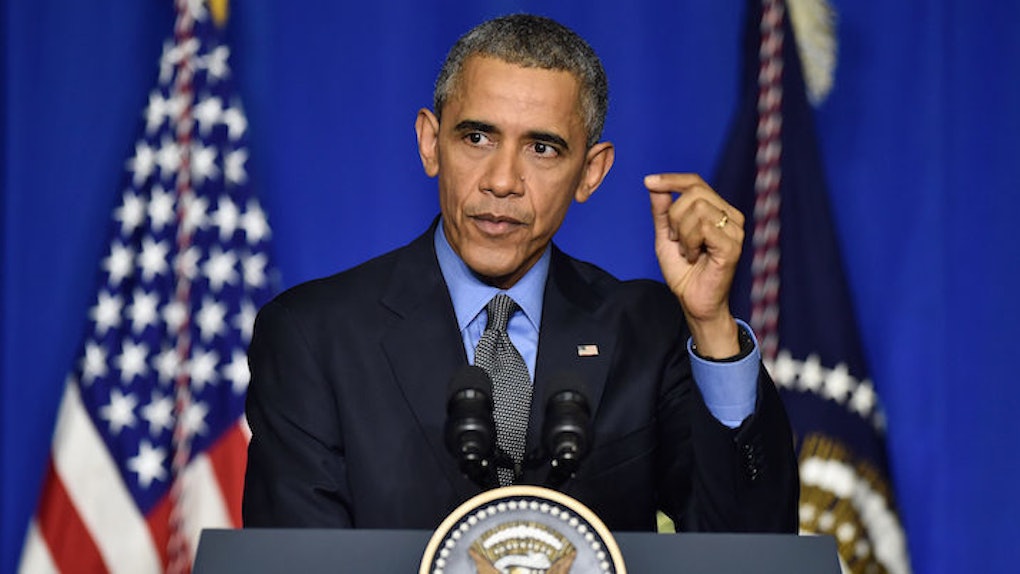 Let's Get Our Sh*t Together: 12 New Year's Resolutions For America In 2016

Another year is coming to a close, and what a year it was.

If one summed the year up solely via news coverage, the last 12 months were fairly bleak.

We witnessed several terror attacks, police killings, mass shootings, the escalation of the conflict in Syria, natural disasters, a refugee crisis reaching its peak and the rise of Donald Trump.

But there were also some high points: same-sex marriage was legalized nationwide, NASA reached Pluto and the USWNT won the World Cup, among other positive highlights.

As a country, America has a lot to be proud of but also a lot to improve upon in the coming year.

Many of us come up with individual resolutions at the beginning of each new year, and there's no reason why the country as a whole shouldn't do the same.

Here are 12 resolutions for America in 2016. Let's hope it follows through on these longer than you keep up your pledge to go to the gym every day (no offense).

Get more citizens to vote

The 2016 presidential election is on Tuesday, November 8, 2016. It's obviously a huge deal for multiple reasons, as the outcome will impact the direction of the country and in many ways the world, in the years to come.

Voter turnout in the US has been deplorable in recent elections. This is particularly true for Millennials, who only constituted around 13 percent of the electorate in the 2014 midterms.

In 2012, voter turnout for the US was around 53.6 percent. This is pathetic for a country that purportedly stands as a beacon of democracy for the wider world and it's far lower than voter turnout in many other countries.

Get out and vote in 2016. Yes, our system is far from perfect, but not participating certainly won't change anything.

Stand against hate, prejudice and injustice

The US has a long history of racism, prejudice, hate, xenophobia and injustice. We can't deny this.

We also can't ignore the fact these awful sentiments are still impacting the country in the present day (Donald Trump is an embodiment of this fact).

From the disproportionate imprisonment of minorities to the rise in hate crimes against Muslims in the wake of terror attacks, America is still contending with various forms of prejudice.

It's time for the country to join together in the fight against all forms of hate.

The gender pay gap has decreased in recent years, and this should be applauded.

But women working full-time still only make around 77 percent of what their male counterparts earn. This is occurring even as women are graduating from college at higher rates than men.

In 2016, let's live up to the principle of equal pay for equal work.

Give everyone paid vacation days (and use them!), and offer paid maternity leave

Even when Americans are offered paid vacation days, they often leave them unused.

All of this is negatively impacting America's happiness and productivity, which does not bode well for its economic wellbeing.

We need to relinquish this regressive attachment to the notion overworking is a sign of strength and efficiency. We also need to realize it's not only unfair not to offer paid maternity leave, it's bad for women's long-term well-being and contributes to the gender pay gap.

It's time for the US to join the modern world and guarantee all employees paid vacation time and paid maternity leave.

It's time to legalize marijuana.

Perpetuating the illegality of a substance even the president admitted is less dangerous than alcohol makes no sense.

Legalizing weed would be an important step forward in ending the War on Drugs -- a futile endeavor that's catalyzed mass incarceration, wasted an astronomical amount of money and increased violence on America's streets (among other places).

A majority of Americans support the legalization of pot, and the federal government should follow their lead in 2016.

We can't deny the US has a problem with gun violence, as it kills over 10,000 Americans per year.

There is no simple solution to this issue, but standing idly by as thousands of people die certainly isn't the answer.

Congress has not passed a single gun law since Sandy Hook, and this is inexcusable.

Gun reform will not completely eradicate the problem of gun violence, but it's notable the states with the most gun deaths have the loosest gun laws. This is not a coincidence.

In 2016, let's finally do something about gun violence.

Be honest about US history

It would be really nice if places like Oklahoma and Texas stopped attempting to whitewash American history in 2016.

Apparently, many in this country feel the notion of American "exceptionalism" isn't fully upheld when US history is taught accurately and honestly.

State legislatures and school boards have sought to rewrite history books and, in some cases, eliminate entire courses.

Look, America was founded by slave owners, it was built on the backs of slaves and the land we now inhabit was seized through the slaughter of indigenous peoples.

Yes, our country is also a product of the hard work, grit and ingenuity of many exceptional individuals, but we can't only highlight the positive aspects of US history.

In order to avoid repeating the mistakes of the past, and to fully comprehend the present, we have to be candid about US history. This requires acknowledging the many unflattering and negative chapters of America's past.

Ignoring and/or rewriting history is not only wrong, it's dangerous.

On any given night, there are over half a million people on the street across the US. Indeed, there are far too many homeless people in this country.

What's more, around 12 percent of the total adult homeless population are veterans.

It's inexcusable and shameful people who've served this country are not being adequately cared for. You can't send people off to war and then ignore them and allow them to fall into destitution when they return. We can and should be better than this.

While homelessness has declined across the board in recent years, we still have work to do in 2016.

Public opinion is an important factor in terms of the government deciding to use military force.

At present, there is an ongoing debate surrounding sending US ground troops to fight ISIS. The president, and foreign policy experts, agree this is not the way forward and would play right into the terrorists' hands.

ISIS would love to see the US bogged down in a lengthy, un-winnable and costly war.

The American public is largely split on this issue, with a slim majority (around 53 percent) in favor of sending ground troops.

Proponents of deploying ground troops to combat ISIS should think back to the wars in Iraq and Afghanistan, and the ultimate outcomes of these conflicts. In spite of the fact these wars are formally over, America is still fighting in Iraq and Afghanistan. Not to mention, ISIS is in many ways a direct product of the 2003 Iraq invasion.

In 2016, let's avoid supporting stupid wars, as to not add to an already convoluted situation in Syria and Iraq.

Climate change is happening, whether we like it or not. But many in the US, especially conservative politicians (some of whom are presidential candidates), are unwilling to admit this.

Around 97 percent of climate scientists agree climate change is happening and is caused by human activities.

In many ways, it's already too late for us to reverse humanity's negative impact on the environment. But doing nothing to improve our relationship with the natural world is counterintuitive and will only serve to our detriment.

President Obama recently said, "The American Republican party is the only major party that I can think of in the advanced world that effectively denies climate change."

It's hard to disagree.

In 2016, every single American politician needs to get on board and admit climate change is happening and that humans are responsible.

This is the single biggest issue of our era. We only get one planet and our survival depends on how we treat it.

Abortion is legal. Keeping it legal and accessible is vital to women's health.

In 2015, many American politicians, primarily conservatives, wasted time and money attacking women's reproductive rights (aiming these attacks at Planned Parenthood). It's time for this to end.

Making abortion illegal doesn't decrease abortion rates, but it does increase the likelihood of unsafe abortions.

Planned Parenthood is a benevolent organization that provides a wide array of vital health services for women. Attacking it because of a personal opposition to abortion is irresponsible and wrong.

As a country, we need to support women's reproductive rights in 2016 (and beyond).

America is deeply divided at present. From an ideological standpoint, this country is arguably about as split as it was around the time of the Civil War.

Liberals and conservatives seemingly hate one another. This is translating into legislative pandemonium and derailing America's progress.

In other words, Republicans and Democrats can't get along and Congress isn't doing its job.

Most of us want what is best for the country, we simply come from different backgrounds and have alternate visions of how to move the country forward. But we probably have far more in common than we might believe.

In 2016, take the time to engage with someone who has political views dissimilar from yours. We need to revitalize civil discourse on important topics.

We won't progress as a country if we allow this ideological schism to persist.

It's time for America to hug it out.