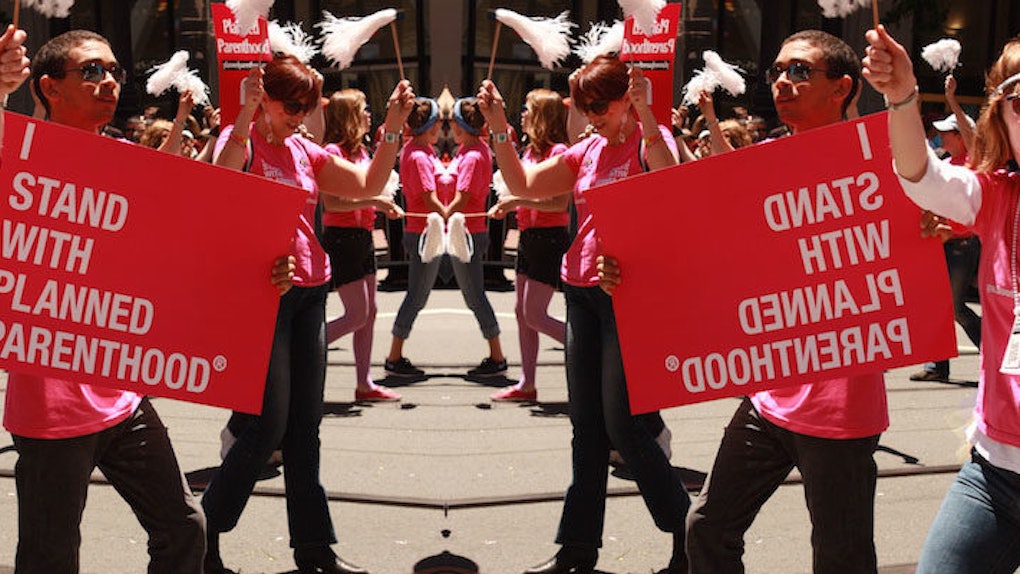 Why All Men Should Support Abortion Rights And Planned Parenthood

Abortion has long been a hotly-contested issue in the United States.

The current focus of this debate is Planned Parenthood, following the release of controversial videos regarding the way in which the organization provides fetal tissues and organs to researchers.

Some are accusing Planned Parenthood of selling fetal remains for profit, which is illegal by federal law.

The organization refutes this assertion and maintains it only charges what is necessary for the preservation and transportation of the fetal remains, which federal law permits.

On Monday, in correlation with these developments, Republican senators voted to defund Planned Parenthood, but were ultimately thwarted by Senate Democrats.

Do you have any idea what year it is? Did you fall down, hit your head and think you woke up in the 1950s? Or the 1890s? Should we call for a doctor? Because I simply cannot believe that in the year 2015, the United States Senate would be spending its time trying to defund women's healthcare centers.

She has a point. Just look at all that's happened so far this year: NASA's New Horizons spacecraft reached Pluto, America and Cuba are on speaking terms again, same-sex marriage is legal nationwide and you can even smoke pot (on your property) in the nation's capital.

But some people, including elected officials, apparently still feel justified in attempting to restrict or control women's bodies and health choices.

This needs to stop, particularly on the part of men who support this regressive stance.

Men don't have a right to tell women what to do with their bodies.

One of the most troubling aspects of the never-ending abortion debate is how often men are the most vocal opponents of reproductive rights.

Men will never know what it is like to be pregnant. They have no right to deliberate over a choice they can never fully comprehend. But they do, all the time.

I'm not sure we need half a billion dollars for women's health issues.

.@HillaryClinton what's absolutely, unequivocally wrong is giving taxpayer $ to an org whose practices show no regard for lives of unborn — Jeb Bush (@JebBush) August 4, 2015

Senator Ted Cruz, also running for president, is vehemently against Planned Parenthood's existence and even opposes abortion for victims of rape and incest.

One could actually contend the entire fight against Planned Parenthood began with Indiana Governor Mike Pence. In 2011, when he was a congressman, he told Politico:

If Planned Parenthood wants to be involved in providing counseling services and HIV testing, they ought not be in the business of providing abortions. As long as they aspire to do that, I'll be after them.

All of this only serves to perpetuate the patriarchal structure of our society and the historic trend of women being oppressed by men.

The comedian Louis CK once stated:

He's not wrong. Men are, quite literally, the worst thing that ever happened to women.

And, based on data from the Centers for Disease Control and Prevention, one in five women report experiencing rape in their lifetime (compared to one in 71 men).

Violence is about power and control through physical violation. When men speak out against reproductive rights, they ignore the violence women are subjected to and the way their bodies are already violated.

Simply put, denying women reproductive rights, including the right to an abortion, is a violation of their bodies and the right to make their own health choices.

From a practical standpoint, there's also the fact making abortion illegal and limiting access to reproductive services does not decrease abortion rates, but it does increase the likelihood of unsafe abortions.

Every year, unsafe abortions lead to the deaths of 47,000 women globally. Keeping abortion legal and accessible helps save lives.

Therefore, all men should support abortion rights, and women's rights generally. It's common sense for the common good.

Supporting Planned Parenthood would be a good start.

Let's be clear, as the LA Times aptly notes, voting to defund Planned Parenthood is not the same thing as repealing the right to an abortion.

With that said, those who support such a move are motivated by anti-abortion sentiments.

Planned Parenthood is the largest abortion provider in the United States. It's also federally funded. This is a large part of the reason Republican politicians are attempting to instigate its demise.

They innately despise taxation, particularly if it contributes to initiatives or organizations that contradict their beliefs (or the beliefs of their constituents).

But it's extremely important to highlight federal money does not contribute to Planned Parenthood's abortion services.

Most of the organizations funding comes from the federal government but, as the Washington Post highlights, "the organization uses money from other sources — private donors and foundations as well as fees — to fund its abortion services."

For decades, the federal government has barred federal funding for abortions, except under certain circumstances: rape, incest or life-endangerment.

Thus, to borrow from Senator Warren once again:

According to the Guttmacher Institute, a pro-abortion rights nonprofit, more than half of pregnancies are unintended and 40 percent of unintended pregnancies end in abortion.

Abortion services comprise only three percent of all the services Planned Parenthood provides. The vast majority of what the organization does involves STD testing, contraception and cancer screening.

The politicization of women's health is despicable. Reproductive rights should not be hindered by partisanship or a desire to win brownie points with pro-life voters.

Men, in particular, should stand up for Planned Parenthood and end this counterproductive and counterintuitive fight against women's rights.