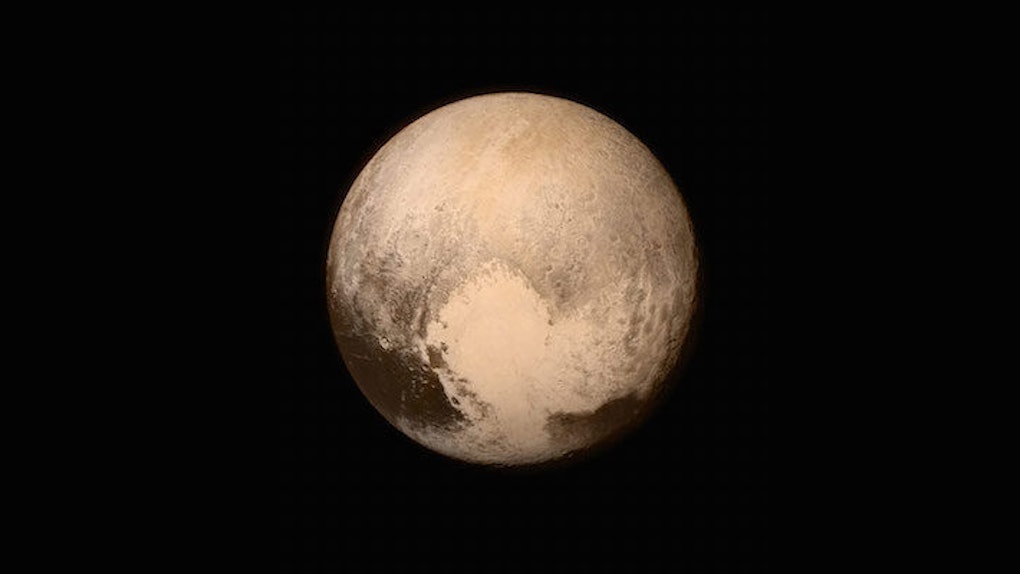 From our earliest days, humans have looked to the stars for answers. Space has been a continuous fascination and a source of wonderment, mystery and, in many ways, fear.

It's the great unknown, the true frontier, making it both captivating and terrifying.

Space encapsulates the most fundamental questions of life: Are we alone in the universe? How did we come to be? Why are we here?

To look to space is to ask these questions, to enter is to search for the answers. Over the course of the past century, humans have made incredible leaps forward in this regard, which was particularly evident once again on July 14, 2015.

After traveling for more than nine years and three billion miles, NASA's New Horizons spacecraft finally made its flyby of Pluto on Tuesday, the New York Times reports.

At approximately 7:49 am, traveling at approximately 30,000 mph, it made history by getting the closest a spacecraft has ever been to the dwarf planet, around 7,800 miles away.

We've now seen Pluto up close for the first time:

This is an incredible scientific achievement and a testament to human ingenuity.

It's also a vital event in the history of space exploration, as no space mission has ever traveled to and explored a world so far from Earth.

The exploration of Pluto and its moons by New Horizons represents the capstone event to 50 years of planetary exploration by NASA and the United States. Once again we have achieved a historic first. The United States is the first nation to reach Pluto, and with this mission has completed the initial survey of our solar system, a remarkable accomplishment that no other nation can match.

While this is an especially proud moment for NASA and the US, it's a feat for all humans to celebrate.

It might sound dramatic, but space exploration is crucial to our survival as a species.

To borrow from Stephen Hawking:

Sending humans to the moon changed the future of the human race in ways that we don't yet understand. It hasn't solved any of our immediate problems on planet Earth, but it has given us new perspectives on them and caused us to look both outward and inward. I believe that the long-term future of the human race must be space and that it represents an important life insurance for our future survival, as it could prevent the disappearance of humanity by colonizing other planets.

This is a fair assertion, particularly when you look at the detrimental impact humans are currently having on their home planet.

The sad fact is many of our activities are fatal to the natural world, and we're jeopardizing our own survival as a consequence.

As we seek to improve our relationship with the environment and rise to the challenges climate change presents, we can't afford to ignore the importance of space exploration.

Humans have survived and thrived because of innovation and scientific advancement.

Space exploration plays a vital role in catalyzing scientific discovery, and it's important we continue to support it.

No one explains it better than world-renowned astrophysicist Neil deGrasse Tyson:

Space exploration is a force of nature unto itself that no other force in society can rival. Not only does that get people interested in sciences and all the related fields, [but] it transforms the culture into one that values science and technology, and that's the culture that innovates. And in the 21st century, innovations in science and technology are the foundations of tomorrow's economy.

In the US especially, where students are lagging behind the rest of the world in science and math, we need to get young people more interested in science.

As Tyson aptly notes, space exploration is one of the best means of accomplishing this.

We also make incredibly significant discoveries via exploration itself.

Research on Mars and its climate will help us better understand our own, putting us in a better position to combat climate change.

Furthermore, scientists believe the recent and remarkable comet landing, for example, will give us a better idea of how the Earth formed.

Thus, space travel is fundamentally about understanding who, what and why we are.

Moreover, as the Council on Foreign Relations highlights, many important medical advancements, including improvements to artificial hearts and mammograms as well as laser eye surgery, were derived from space technologies.

A number of popular household items, including vacuums and memory foam mattresses, are also linked to NASA.

In other words, space-related research is abundantly beneficial.

But over the years, NASA has been made less of a priority, seeing significant cuts to funding.

We are doing a disservice to ourselves by not providing NASA with the support it needs to further scientific innovation and discovery.

Space exploration is becoming increasingly commercialized, with private companies playing a large role. Many, including Neil deGrasse Tyson, believe it would be a mistake not to have NASA, with its expertise and experience, at the center of these initiatives.

Recently, there has been a lot of debate in Congress over how the limited funds appropriated for NASA should be distributed.

This has included heated discourse over the allocation of money for NASA's earth sciences programs.

The fact of the matter is both earth sciences and space exploration are important, and NASA simply needs more funding in general.

Simply put, the health of our planet and humanity's long-term survival depends on keeping a watchful eye on Earth while also looking beyond it.

NASA plays an imperative role in this endeavor, particularly via space travel.

Perhaps most importantly, space exploration helps us recognize our place in the universe, diminishing our egos while helping us overcome our petty differences.

Were it not for @NASA & kindred programs of discovery, I wonder what hope would remain for our species to rise above itself. — Neil deGrasse Tyson (@neiltyson) July 12, 2015

In the words of Carl Sagan:

It has been said that astronomy is a humbling and character-building experience. There is perhaps no better demonstration of the folly of human conceits than this distant image of our tiny world. To me, it underscores our responsibility to deal more kindly with one another, and to preserve and cherish the pale blue dot, the only home we've ever known.

We are simply a small, but interconnected, part of something more vast than we can begin to comprehend.

If we can recognize this, the disputes that plague our world might finally begin to dissipate.