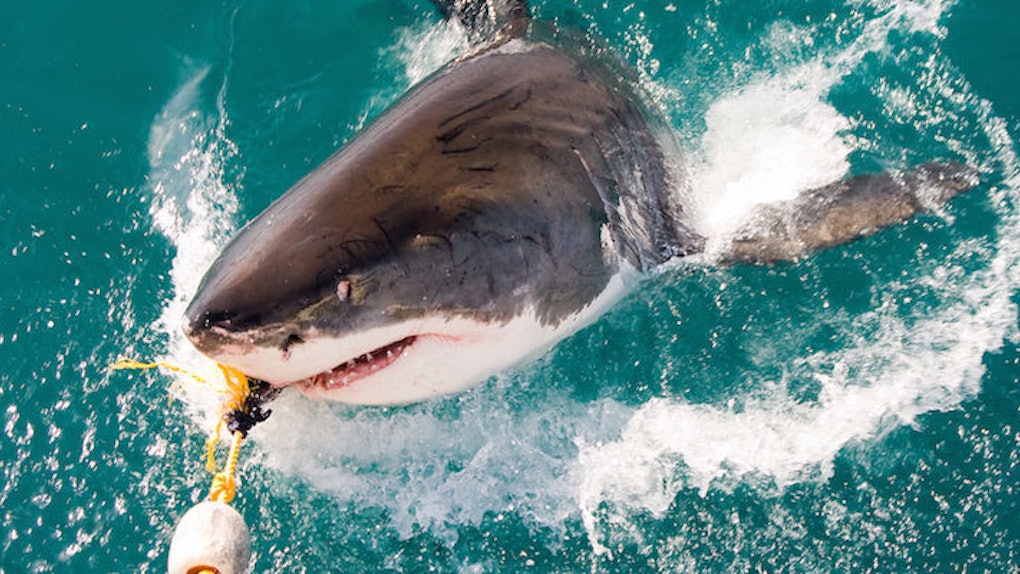 100 Million Sharks Are Killed Each Year: If They Keep Dying, So Will We

This isn't a rallying cry you often hear given many are absolutely terrified of these predatory fish. It's much easier to get people behind saving gentle or furry creatures like whales, giant pandas and penguins.

But we need to wake up to the fact if all the sharks in the world died, it could drastically affect the health of the ocean and, in turn, the survival of humans. Currently, overfishing is having a devastating impact on the global shark population.

It's difficult to widely disseminate this information, however, when sharks are constantly portrayed in a negative light.

The sensationalized depiction of sharks in the media has perpetuated an image of them as bloodthirsty, man-eating predators. But this is both misleading and false.

In actuality, humans are the real predators, killing sharks at a rate that is driving many species toward extinction.

If this doesn't stop, it could have disastrous consequences.

Humans are the real predators.

You have about a one in 11.5 million chance of being attacked by a shark. And your odds of actually dying from a shark attack are one in 250 million. You're far more likely to die choking on your dinner tonight (remember to chew) or from falling out of your bed.

We really have no reason to fear sharks, but they have every reason to be terrified of us.

Every single year, it's estimated around 100 million sharks -- between six to eight percent of the world's total shark population -- are killed by humans as a consequence of commercial fishing. Comparatively, sharks only killed three people across the globe in 2014.

The rapid rate at which sharks are currently being killed is primarily a consequence of the demand for shark fin soup in China, which is considered a delicacy.

Through a practice known as finning, sharks are caught, their fins are cut off and their dead carcasses are tossed back in the ocean. These fins show up all over the world, including places like San Francisco.

Sharks are also fished for their meat, liver oil and cartilage, among other parts. Additionally, many sharks are caught accidentally by fishermen engaging in reckless practices like surface longline fishing, which is detrimental to a wide variety of marine life.

A large part of why sharks being extremely susceptible to overfishing is problematic is that they take years to reproduce, grow slowly, produce few young and mature late.

As ecologist Boris Worm puts it:

Biologically, sharks simply can't keep up with the current rate of exploitation and demand. Protective measures must be scaled up significantly in order to avoid further depletion and the possible extinction of many shark species in our lifetime.

In some parts of the world, the practice of finning and trading shark fins has been banned. Unfortunately, however, sharks are still being killed at far too high a frequency.

If this doesn't change, humans will pay the price.

Sharks keep the ocean healthy, and we need to keep them around.

If the global shark population continues to deplete because of overfishing, it could have enormous economic and societal costs.

Sharks are vital to the equilibrium of the ocean.

As Joshua Reichert, director of environmental work at The Pew Charitable Trusts, notes:

The widespread killing of sharks must be stopped if these apex predators are to remain in the world's oceans. Their continued presence is important for many reasons, chief of which is the role they play in maintaining the balance of marine ecosystems. Like apex predators everywhere, they weed out the weak and the sick among the populations they prey on, and in so doing, help to ensure an appropriate balance of life in the marine food web.

When sharks disappear, so do other species, including important commercial populations. This is bad news for both our bellies and our wallets.

Sharks help maintain the health of coral reefs, which are crucial to tourism in many parts of the world and help sustain economies.

Around 3.5 billion people around the globe depend on the ocean as their primary source of food.

If we keep overfishing sharks, it could lead to significant decreases in the diversity of species and food shortages in the long-run.

Much like the affect the declining population of bees has on agriculture, this is another manmade problem with inevitable consequences for human beings.

Simply put, by killing sharks and bees, among other living organisms, we're killing ourselves. Maintaining ecological diversity is imperative to the health of the planet and humanity's survival.

In order to slow the overfishing of sharks, we need to educate people on their value while promoting international laws against practices like finning and harsher punishments for violations.

Don't be fooled by recent news surrounding shark attacks. These incidents aren't the fault of sharks at all. We need to learn to value the ocean's sharks, as our long-term survival depends on them.