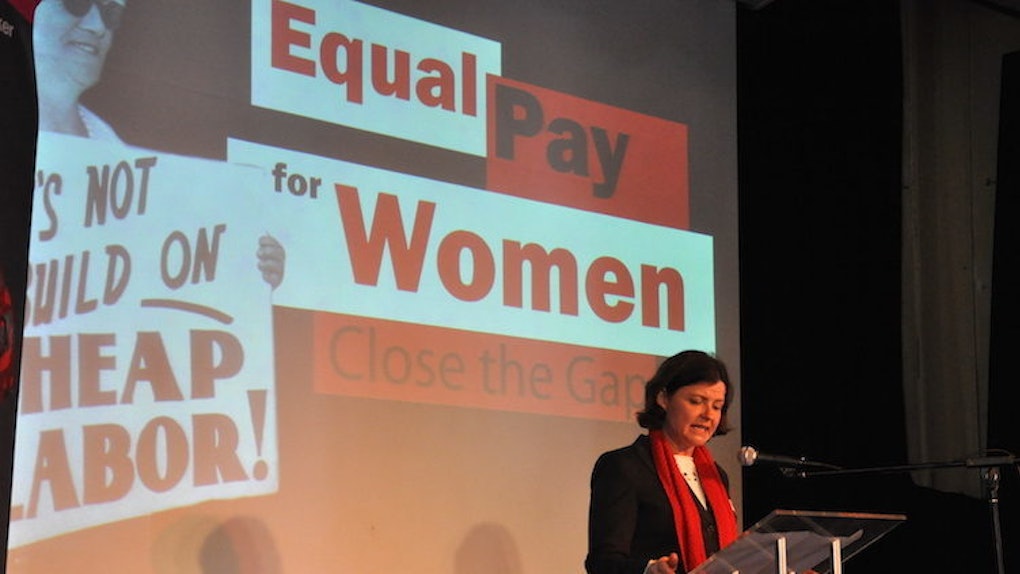 Ninety-five years ago yesterday, American women finally gained the right to vote. On August 18, 1920, the 19th Amendment to the Constitution was ratified, effectively guaranteeing suffrage to all women. The significance of this moment in American history cannot be overstated.

Voting is the most fundamental right in any democracy, but women were denied it for the majority of America's existence.

To put this into perspective, the United States is 239 years old, but women weren't granted suffrage until 144 years after it was founded. The comedian Louis C.K. perhaps put it better when he quipped:

The fight for women's suffrage in America arguably began before it truly existed as a country. In 1648, an English immigrant in St. Mary's City named Margaret Brent appeared before the Maryland Assembly and became the first female in the New World to demand the right to vote, but she would not be the last.

Like many who would follow her, Brent was denied her request, signifying the difficulties women have faced in terms of being treated as equal citizens in this country.

The women's suffrage movement really gained steam around the mid-19th century and continued to grow under such figures as Susan B. Anthony.

Major transitions in society, like more women in the workforce, combined with the unrelenting efforts of suffragists ultimately led to the ratification of the 19th Amendment to the Constitution.

But the fight for women's rights did not end there, and it continues to this day.

It might be 2015, but women in America continue to lack basic rights that should be afforded to citizens in any progressive, democratic society.

In many respects, the United States lags behind much of the world when it comes to women's rights, including certain developing countries.

So as we celebrate the anniversary of a positive moment in American history, let's not forget there's still work to be done.

Here are three ways the fight for women's rights in the United States is far from over:

A report from the World Economic Forum ranks the US 65th out of 142 countries in terms of wage equality, or paying women equally for working the same jobs as men.

The gender pay gap has decreased in recent years, but full-time working women in America still make less than their male counterparts.

The White House claims full-time working women make around 77 percent of what men make. Data from Pew Research Center suggests when you also account for women working part-time, the average is closer to 84 percent. If you're a woman of color, the pay gap is even wider:

All of this is occurring even as women are graduating from college at higher rates than men.

In other words, the pay gap isn't a product of men being more skilled or knowledgeable than women.

Some of it is likely attributed to gender discrimination, Pew Research Center notes, as females are nearly twice as likely than males to say they've been discriminated against at work.

But evidence also suggests the largest contributing factor to the pay gap is actually something linked to our survival as a species: motherhood.

The United States is the only developed country and one of only nine countries in the world that doesn't guarantee paid maternity leave, and it's directly tied to the gender pay gap.

When women's livelihoods aren't protected after giving birth, it has a detrimental impact on their longterm welfare.

Evidence points to the fact women are far more likely than men to take time off work or even quit their jobs to take care of their families.

At the same time, there is evidence women have a higher probability of staying in the labor force when guaranteed paid leave. This translates into more stable wages in the long-run.

This is precisely why we need federally mandated paid maternity leave. Women should not be penalized for being mothers. The United States should join the modern world and recognize this.

The US Congress currently has more female members (104) than at any point in American history. This is definitely a sign of progress.

Yet, that also means while women make up around half of the US population, they still only comprise around 19 percent of the legislature (104 out of 535 members).

Even Afghanistan has more female legislators, and the country is not exactly known for being particularly progressive toward women.

The United States has also never had a female president. Yet, as CNN notes, for the past half century, 52 countries around the world have seen females as heads of state.

Indeed, when compared to the rest of the world, America is way behind the times in terms of female leadership.

Including women in the political conversation is vital to the well-being and progress of any nation. American politics have been dominated by old white men for far too long.

Part of the problem is not enough women are actually running for office, which is largely connected to the discrimination they face as well as the institutional barriers.

A recent Gallup Poll revealed 92 percent of Americans would vote for a woman presidential candidate. Even still, it's telling there are currently 22 people running for president across both parties, yet only two of the candidates are women (Hillary Clinton and Carly Fiorina).

Beyond politics, women are also underrepresented in the business world. While women make up around 47 percent of the US labor force, only about five percent of Fortune 500 companies are led by female CEOs.

When women were granted the right to vote in 1920, it was an important step in terms of establishing a freer, fairer and more democratic society.

But if we truly want to live in a country that adheres to these principles, we need to take a hard look at the ways women are still held back.