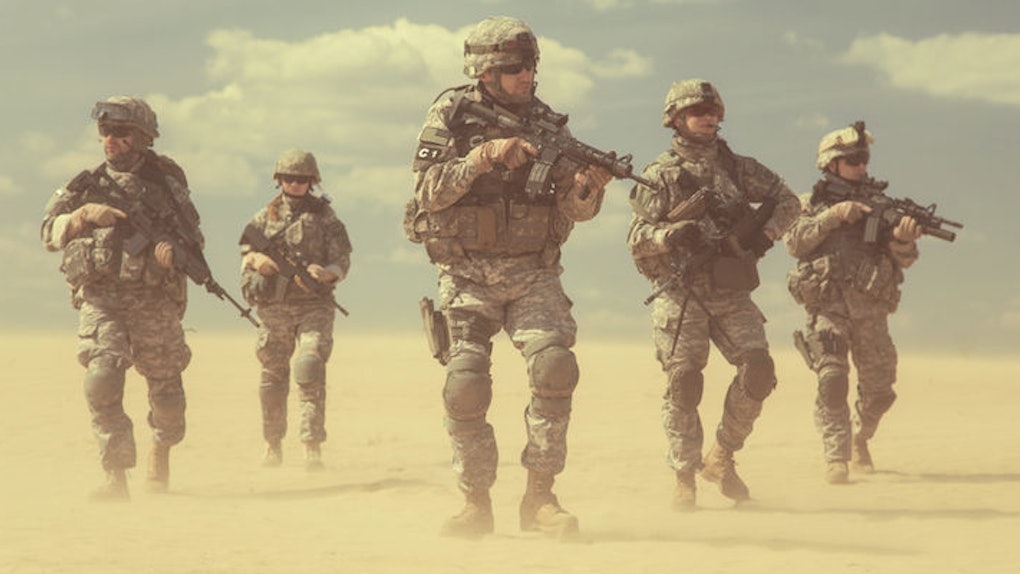 America Might Have The Best Military, But It Keeps Losing Wars

Do you know anyone who fought in it? No?

Well, that explains why we lost it.

In other words, the ever-increasing disconnect between the public and the military is having a detrimental impact on America's effectiveness in war.

When the public isn't as connected with the military, it becomes more willing to send it off to war. Politicians and businesses have profited off this situation by sending American forces to fight in un-winnable, costly and lengthy conflicts.

Americans love the military. It's the one institution that remains uncriticized by the public. Yet, by blindly supporting this entity, we have placed it in even greater danger.

We are doing our military a disservice by not thinking critically about the conflicts we send it to fight and die in.

The War in Afghanistan is formally over, but not in reality.

The United States has the greatest fighting force in the world, but it has failed to achieve America's larger strategic aims in the War on Terror.

After 13 years in Afghanistan, the Taliban is still alive and well. Technically, this war has now ended, but nearly 10,000 US troops will remain and continue to train Afghan forces.

The War in Afghanistan might be over in a formal capacity, but that doesn't mean the violence there is over. Correspondingly, the ceremony held to signify the end of the war had to be held in secret due to the threat of Taliban strikes in Afghanistan's capital. This is very telling.

Obviously, the War in Afghanistan isn't really over when you can't even publicly celebrate its supposed conclusion without getting attacked. Not to mention, two US soldiers were killed in Taliban attacks during the past month.

Similarly, with Iraq in complete shambles right now and ISIS posing a significant threat, one can hardly argue that the 2003 Iraq War was a success. In many ways, this conflict set the stage for the rise of ISIS. You reap what you sow.

Indeed, the War on Terror has been a $1.5 trillion failure.

Why has this war been such a complete and utter debacle? It's complicated, but in many ways it's related to the public's relationship with the military.

Americans love the military, but aren't connected to it.

When the War in Afghanistan began back in 2001, a majority of the American public (80 percent) supported it. The same was true for the 2003 Iraq War (72 percent).

We didn't ask any pressing questions about the motives behind these wars. One can hardly blame us for this in some ways. We were still grieving over the tragic events of 9/11. It seemed logical that we would attack governments with alleged connections to the perpetrators of those heinous attacks.

By the beginning of 2014, however, a majority of Americans stated that their country's efforts in Iraq and Afghanistan had failed.

By the end of the Iraq conflict, we'd realized that the narrative of that tragic day had been hijacked to garner support for an unjust and needless war. Saddam Hussein had no connections with al-Qaeda, he didn't even have Weapons of Mass Destruction (WMDs).

In Afghanistan, we spent years chasing Osama bin Laden, only to find and kill him in Pakistan. Not to mention, killing him has made no palpable difference. Al-Qaeda and the Taliban both live on, and we face a whole new series of threats with ISIS and other terrorist organizations in Africa.

Why do we support stupid and costly wars? Because the structure of our society and military makes it easy to.

Americans need to pay more attention to their military.

The population of the United States is around 316 million people. The US military is currently 1.4 million people on active duty and another 850,000 in the reserves.

In other words, the vast majority of Americans do not serve in the military and likely don't even know someone who has.

As more and more US troops come home from Afghanistan, they will return to a public that has hardly any connection to them or the conflict they just fought in.

Likewise, as the US continues to rely on weaponry like drones, which require fewer troops on the ground, the prospect of war becomes even more attractive. When you can fight a seemingly costless war against an ostensible threat like terrorism, it's not hard to get the public to support it.

When you can kill your enemies with the push of a button, war becomes more of a game than a violent reality, unless you're on the receiving end.

Not surprisingly, a majority of Americans (65 percent) also support the use of drones and drone strikes. They do this in spite of the fact that drone strikes are arguably ineffective, illegal and immoral.

Thus, the US public needs to reevaluate the nature of its undying support for the military. This is not to say that we should stop commending those who have fought for the protection of their country. Yet, the US spends more on its military than any other country in the world. Its military is the most well-equipped fighting force in history. All the while, it keeps losing wars.

The reasons behind this are complex, and much of it has to do with behind-the-scenes political maneuvering as well as corporate interests. Long wars mean big profits for weapons manufacturers. It's in their interests for the United States to go to war.

Accordingly, it's in their interests for the US public to love and support the military whenever it goes to war, regardless of how senseless or imprudent the conflict may be.

As the United States continues its counterterrorism efforts and utilizes its military in various parts of the world, the public needs to demand greater accountability surrounding the use of force.

We have more of an influence than we might believe.