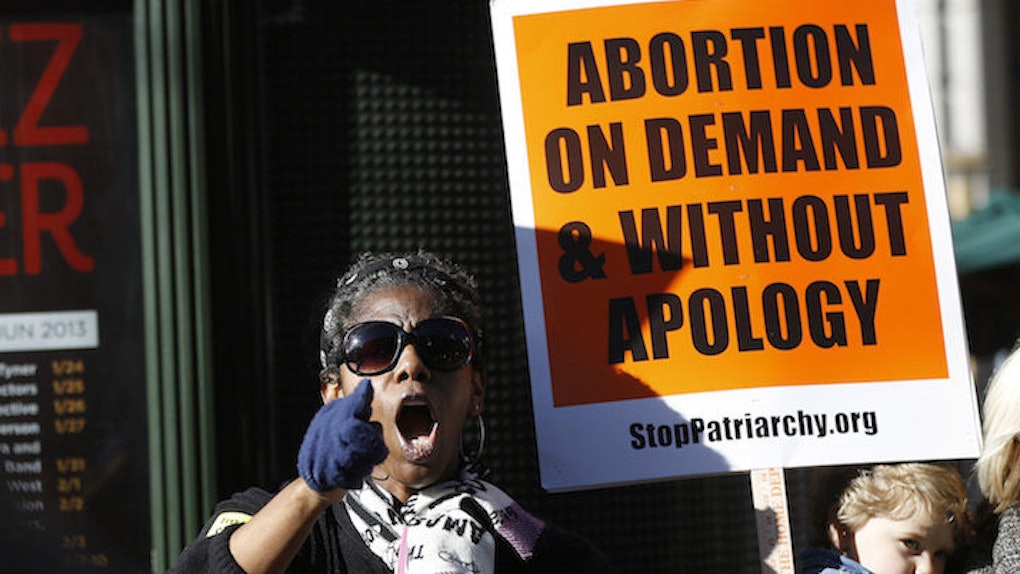 Women seeking abortions in Texas are now supposed to read a pamphlet from the Department of State Health Services that says abortion is linked to depression and suicide.

There's just one major issue with that: There has been no proven link between abortion and depression.

A new study performed over several years and released on Wednesday proves that point even more.

Advancing New Standards in Reproductive Health at the University of California, San Francisco has been conducting the Turnaway Study.

A new report from that study is about mental health after receiving or being denied an abortion.

We found no evidence that women who have abortions risk developing depression, anxiety or low self-esteem as a result of the abortion, either immediately following, or for up to five years after the abortion.

This goes against the patronizing reasoning of many state laws on abortion.

Seventeen states have laws that say women need to be counseled before having an abortion. This includes state-mandated scripts and pamphlets, like the one from Texas.

But these scripts and pamphlets often include points not backed by science. For example, they say there's a link to depression and breast cancer. There is no proven scientific evidence for either of those points.

These findings do not support policies that restrict women's access to abortion on the basis that abortion harms women's mental health.

This is not the first study ANSIRH has released that debunks the reasoning of these anti-abortion politicians.

Many states require women to have "waiting periods" before getting an abortion. Women are given information – usually not entirely true information – and then have to wait 24 or more hours to come back for the actual procedure.

Politicians say they do this to make sure women are totally sure about wanting to get an abortion.

A study released by ANSIRH in October, however, showed women are more certain about getting abortions than they are about getting medical treatments unrelated to pregnancy.

The Turnaway Study looked at about 1,000 women from across the country who sought abortions.

The researchers interviewed these women every six months. The women were asked about their mental and physical health, as well as their education, employment, family relationships and other factors. Women who had had children were also asked about the state of the kids.

In a concurrent opinion, Justice Ruth Bader Ginsburg clarified the court ruled based on a lack of evidence that the Texas laws had any actual benefit for the women seeking abortions.

This means when abortion laws are challenged in courts, they have Ginsburg's words to act as precedent. Attorneys can use the argument that if a law doesn't have scientific evidence of medical benefit, it should not be ruled as constitutional.

In the past, Supreme Court justices have used the flimsy idea that abortion hurts mental health in deciding cases.

That is why studies like this are so important. They can be entered as evidence in courts to prove abortion-restricting laws have no medical basis, therefore helping to strike them down.