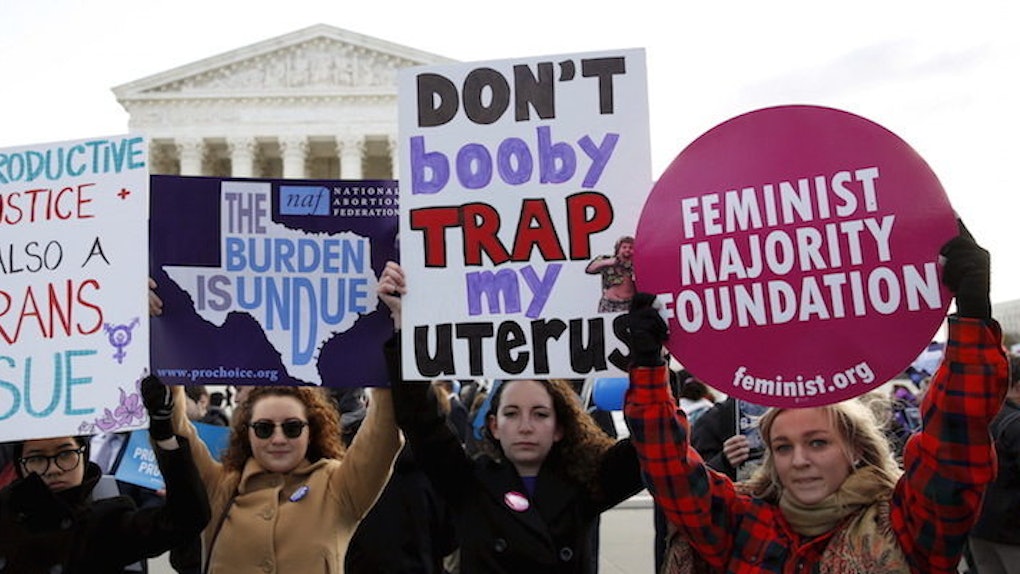 Texas lawmakers are trying to institute a new law where aborted fetuses need to be buried or cremated.

But the Avenger-like legal superhero team of the Center for Reproductive Rights and Whole Woman's Health are absolutely not having that bullshit.

The Texas law was confirmed two weeks ago, and is supposed to go into effect on December 19.

It specifies that health care facilities need to pay and arrange for these burials and cremations.

Texas' profound disrespect of women's health and dignity apparently has no bounds with this recent attack.

Most abortions happen early in a pregnancy, meaning that many of these remains amount to a clump of cells smaller than a peapod.

This adds a burden on clinics, which will have to find third-party organizations to agree to work with them for the burials/cremations and will have to obtain additional funds to pay for them.

In turn, this will add a burden on patients, who might see prices rise and clinics shut down if they cannot create these third-party agreements.

The Center for Reproductive Rights announced they're suing Texas on Monday morning.

Regulation has no public health benefit. It does nothing to improve public health or safety, as [the Texas Department of State Health Services] alleges; rather, it is a pretext for restricting abortion access.

Nancy Northup, president and CEO of the Center for Reproductive Rights, said in a statement,

These regulations are an insult to Texas women, the rule of law and the U.S. Supreme Court, which declared less than six months ago that medically unnecessary restrictions on abortion access are unconstitutional.

She called the laws a "new low in Texas' long history of denying women the respect that they deserve to make their own decision about their lives and their healthcare."

The lead plaintiff on this new case is Whole Woman's Health.

Whole Woman's Health was the same facility behind the landmark Supreme Court case from this past year.

That case, Whole Woman's Health v. Hellerstedt, was also from Texas. The Supreme Court struck down Texas's HB 2, which said abortion clinics had to meet the requirements of ambulatory surgical centers and said providers had to have hospital admitting privileges.

Those requirements caused half of the state's abortion clinics to shut down, placing an "undue burden" on women, who were forced to travel out of state and pay a lot of money to obtain the safe and legal medical procedure.

The lawsuit is again against John Hellerstedt, commissioner of the Texas Department of State Health Services.

So what we have here is Whole Woman's Health v. Hellerstedt: Round Two.

When TX imposes restrictions that push safe & affordable abortion care out of reach, @ReproRights & @WholeWomans are like: pic.twitter.com/JGVFZSonrz — All* Above All (@AllAboveAll) December 12, 2016

Texas' profound disrespect of women's health and dignity apparently has no bounds with this recent attack on women.

She added that "grief is part of the abortion decision" for many women Whole Woman's Health treats -- but "for many others, relief and freedom are the most common feelings they have."

Hagstrom Miller said that the organization is "not afraid of tears or tough times" and welcomes "all pregnant people" along with their families, questions, emotions and belief systems. She said,

It is not the business of politicians to regulate people's bedrooms, families, bodies or the rituals and beliefs people have in their own lives. Politicians have no place stepping into the private decisions Texans make during their healthcare experiences.

This opinion will likely be useful in round two of Whole Woman's Health v. Hellerstedt.

Ginsburg's concurrence specified the Supreme Court struck down the law in part because it had a "virtual absence of any health benefit."

Given those realities, it is beyond rational belief that H. B. 2 could genuinely protect the health of women, and certain that the law 'would simply make it more difficult for them to obtain abortions.'

This reasoning could be used to help strike down this newest Texas abortion law, which also has no health benefit for women and seems to only add an additional burden on women to obtain abortions.