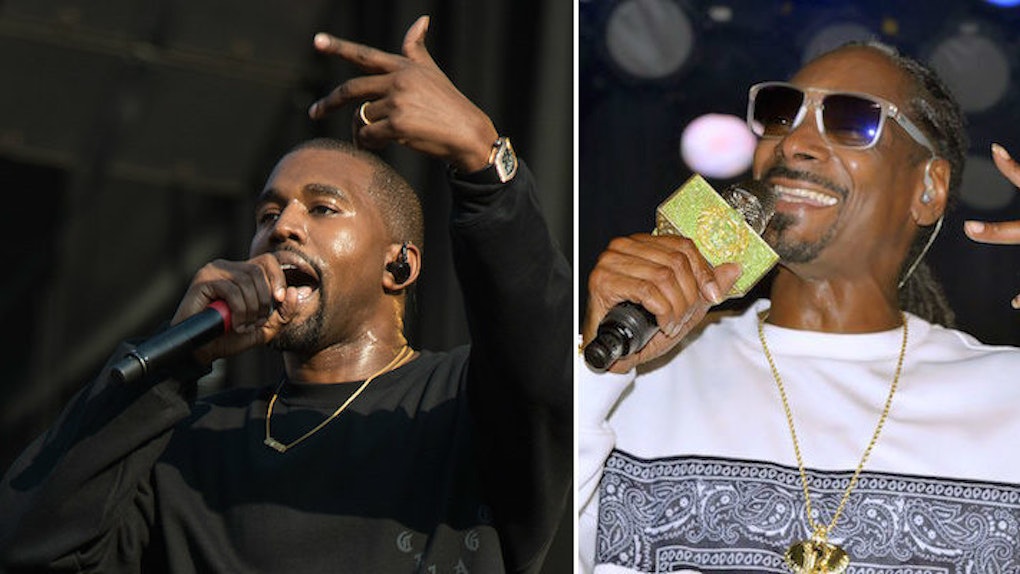 There's a chance Kanye West needs our emotional support because he's sure as hell done getting anything financial from us.

After cutting several recent shows short, taking breaks mid-set to rant about supporting Trump, remarking on his strained relationship with former collaborator Jay Z and canceling the remaining dates on his Saint Pablo Tour, Kanye is losing the support of fans and fellow rappers.

Yesterday, Snoop Dogg shared a series of videos to Instagram commenting on one of Yeezy's most recent tour rants, and concluded the 39-year-old is “crazy.”

During a Sacramento show on Saturday night, Kanye claimed he was “on [his] Trump shit tonight” and planned to “take [Trump's] lead… just be Ye and win” while denouncing the radio industry and media giants like Google and Facebook.

During the 15-minute vent sesh, he addressed rumors longtime pal Beyoncé refused to perform at the 2016 VMAs without a guaranteed win for Video of the Year (an award she did end up taking home for “Formation”).

Beyoncé, I was hurt… I heard that you said you wouldn't perform unless you won Video of the Year over me and over 'Hotline Bling' … Don't go trying to diss Beyoncé. She is great. Taylor Swift is great. We are all great people. We are all people. But sometimes we be playing the politics too much and forget who we are just to win. Fuck winning. Fuck looking cool. Fuck looking cool. Fuck being cool. Fuck all that, bruh… Jay Z, call me, bruh. You still ain't call me... Jay Z, I know you got killers, please don't send them at my head, just call me. Talk to me like a man.

Though this isn't the first time Kanye has called out the power couple for their lack of communication, it's the first time Snoop has been inspired to share his thoughts on Ye's Sheen-esque behavior from the comfort of what looks like the nap cabin of a spacecraft custom-designed for pleasure trips to the moon.

“I thought he was supposed to be doing a show?”

“I smoke weed. Weed don't make you do that. What the fuck is he on?”

As frustrated as ticket holders are to lose their chances to see Kanye live, his latest shows are an indication fans aren't missing much due to the cancelations.

Perhaps some time off the road, tending to his mental and emotional well-being and supporting wife, Kim Kardashian West — whose recent armed robbery drove her out of the spotlight — is the most beneficial course of action for the Chicago native right now.