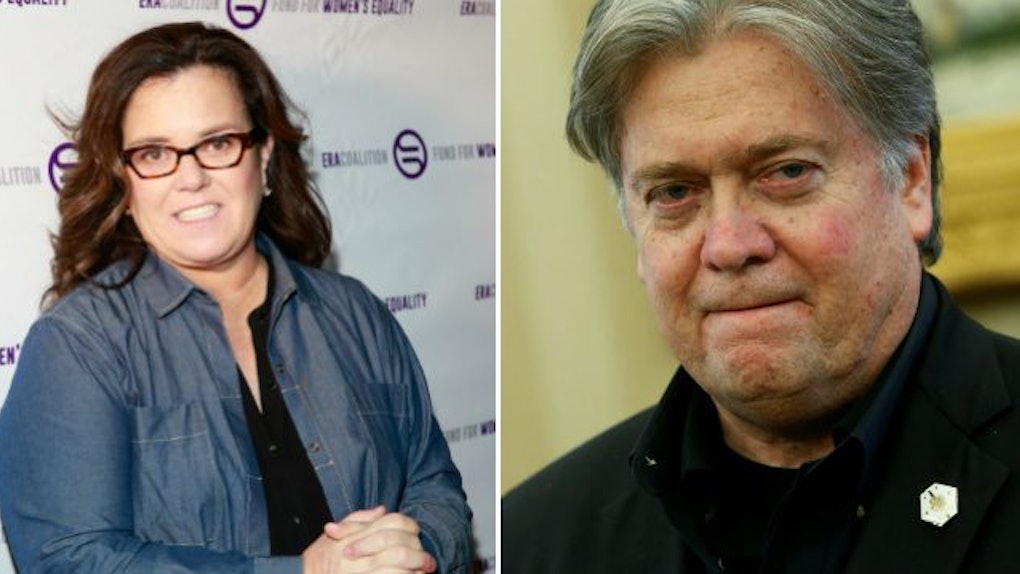 Rosie O'Donnell Wants To Be Steve Bannon On 'SNL'

It's common knowledge President Donald Trump isn't a big fan of "Saturday Night Live." He has infamously labeled the show he once hosted as unfunny and said it needed to be cancelled.

According to Politico, it wasn't the fact McCarthy made fun of Spicer's "alternative facts" that enraged the president. A source said Trump was upset Spicer was portrayed by a woman.

This may suggest Trump thinks women are weak.

Some are saying Trump found the portrayal of his press secretary so problematic it may affect Spicer staying in his role at the White House.

Like... imagine getting in trouble at your job if your boss didn't like how someone else made fun of you???

A lot of people on Twitter have found a solution to getting Steve Bannon, who is arguably the puppet master of Trump, possibly fired by the egotistical man himself: having one of Trump's most loathed women appear as him on "SNL."

Amazingly enough, Rosie answered back to one of those Twitter users calling for her to defend our great nation from Bannon.

So, please, Lorne Michaels, reach out to Rosie and have her appear as Bannon, and get this anti-Semitic, misogynist, white supremacist out of the White House.

It would be fantastic karma for the bullying Donald Trump has performed against the comedian over a grudge he's held for over 10 years.

O'Donnell once called Trump out on "The View," where she argued he shouldn't be the moral authority for 20-year-olds during the "Miss USA" pageant when he was deciding to decrown Tara Conner for underage drinking or not.

O'Donnell said he isn't a moral compass, especially after he left two of his wives and had an affair.