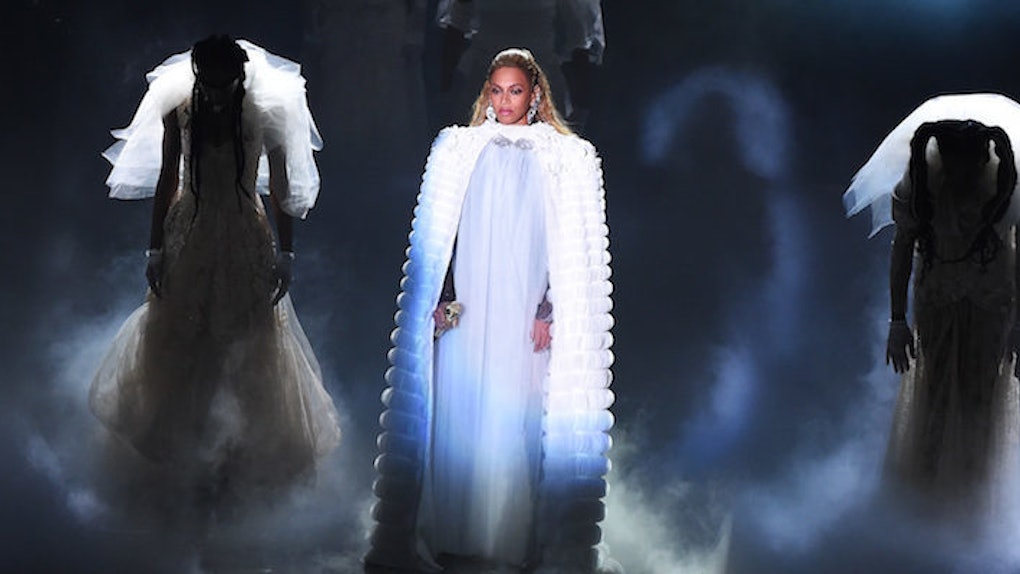 11 Ways Beyoncé Put Everyone Else To Shame At The VMAs

After weeks of anticipation and speculation, Sunday night's 2016 MTV Video Music Awards were a bit of letdown.

With no Taylor Swift, an awkward Kanye West speech and an unusually short list of big-name performers, many people agree there was only one truly great part of the night: Beyoncé.

Beyoncé came to slay, and slay she did. Not only did she take home eight VMAs (including Video of the Year), she was also easily the most impressive performance of the night and the most interesting person on the red carpet.

Overall, it was basically a Beyoncé-themed night, and we should all be very grateful the Queen was there to save us from an otherwise unremarkable VMAs.

In case I haven't convinced you yet, allow me to lay out all the ways Bey totally won the night at the VMAs.

1. She looked like an angelic boss lady on the red carpet.

Beyoncé definitely had one of the most eye-catching dresses on the red carpet. On anyone else, those feathered shoulder pads would look super extra, but, as always, Bey worked it.

Jay-Z was nowhere in sight last night, instead, Beyoncé had 4-year-old Blue Ivy Carter at her side. How's that for #MomGoals?

3. Which, by the way, brings us full circle from the last time she brought Blue to the VMAs in 2011.

Never forget her epic performance and pregnancy announcement in 2011.

Seriously, how is this 4-year-old slaying so hard? Oh, right: Her mom is BEYONCÉ.

5. Bey and Blue gave us the first good meme of the night.

At one point, Beyoncé leaned down to whisper something Blue, and the internet had a lot of fun trying to guess what exactly she said.

6. She gave a 15-minute long, five-song performance and slayed every second of it.

7. She wore a total of five different outfits over the course of the night.

Every time I looked away for a second, Beyoncé suddenly had a new outfit on. I suspect magic was involved.

8. She cracked an MTV camera lens with her epic bat swing.

Just so everyone knows, this is a reference to her "Hold Up" music video and it was definitely planned. But still, it's awesome — she cracked the lens!

I'm just saying! Also, she's really good at dancing. But the butt, though.

10. She won EIGHT VMAs, including Best Video of the Year.

I mean, duh. Even Kanye West agreed: "Formation" was the best music video of all time. OF ALL TIME!

No one can compare to Queen Bey. Bow down, bitches.