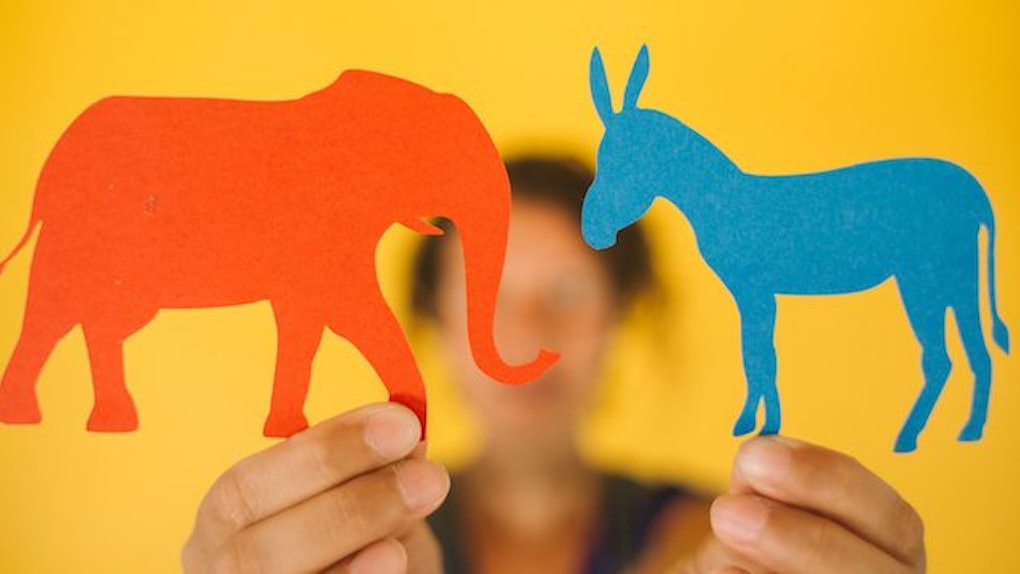 There are loads of reasons why people break up, and while some reasons are totally valid, some are stupid beyond reason.

But most just happen due to a weird culmination of reasons in the gray area, like miscommunications.

However, a recent survey by dating site WhatsYourPrice revealed that, in 2016, women said the number one cause of their relationships ending was political differences with their partner.

For men, however, the breakups were mostly due to their partner's weight gain.

*walks over to window, opens it, SCREAMS OBSCENITIES INTO THE DARK VOID, eats a donut and returns to desk*

The survey of nearly 7,000 participants sought to uncover the biggest reasons for breakups in 2016, in honor of Valentine's Day (also know as Single's Awareness Day).

Of course, 2016 was fraught with political upheaval, and it is no secret the current landscape of our country and government has become a major point of contention in families, friendships and, of course, relationships.

So it makes sense, then, that not seeing eye-to-eye on some very volatile, important political and social issues might cause the end of some relationships.

BUT THEN AGAIN, THERE'S ALWAYS THE RISK OF GETTING TOO FAT, WHICH WE ALL KNOW IS THE GREATEST SIN ANYONE COULD COMMIT.

The survey asked participants to rank the reasons for their most recent breakup, and WhatsYourPrice sorted the top responses by gender.

A whopping 35 percent of women agree "political differences" were the number one cause for their relationships ending, followed by "bad sex" at 24 percent.

For men, "weight gain" came in at number one with 27 percent of participants, followed by "attachment issues" with 20 percent. Straggling at the end were reasons like "jealousy" (18 percent), "bad sex" (12 percent) and "infidelity" (8 percent).

WhatsYourPrice did note that "communication issues" and "complacency" didn't make the top five breakup reasons for either gender, which, I guess, makes me feel, like, only a little bit better in the grand scheme of things.

Founder and CEO of WhatsYourPrice, Brandon Wade, explained it's not that big of a surprise men and women don't agree on the top cause of a breakup.

He said, "When a relationship ends, it means the parties involved cannot see eye-to-eye or reconcile their differences."

The trick to avoiding a breakup is defining for yourself and your partner what things you cannot and will not stand for in a relationship.

For a lot of us women, these deal breakers are probably becoming much clearer with each passing (political) day.

One thing I can promise you: If you need me, I'll be in the kitchen angry-eating waffles and explaining to anyone who will listen why I stand with Planned Parenthood.