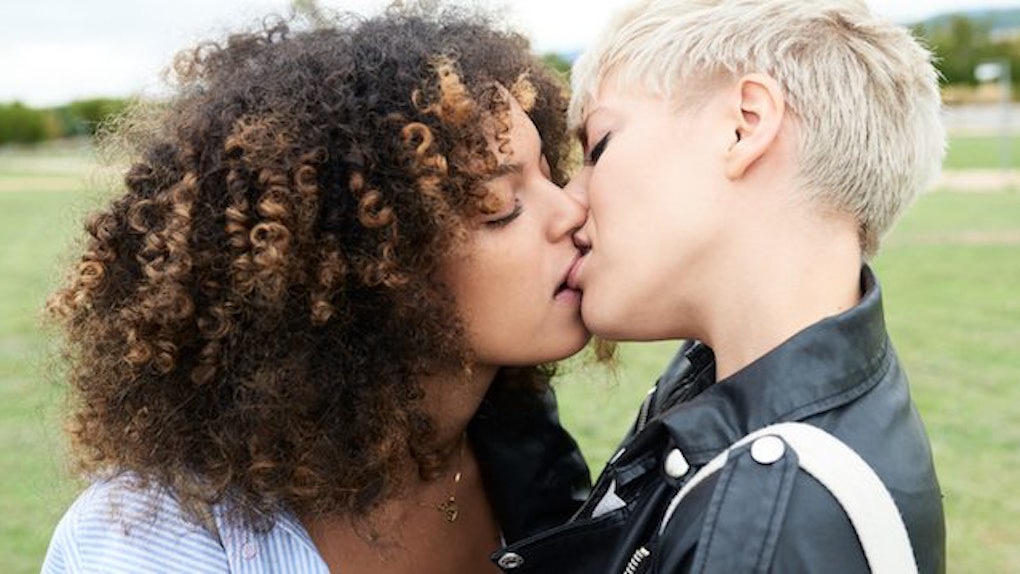 Myths About Lesbian Sex That Are False

You wouldn't believe the shit I hear almost every single day — especially when booze is involved.

"Oh my god, Zara, do you, like, have THREESOMES all the time? And, like, oh my God, if you slept with a dude before, are you, like, still an official lesbian?"

And before I have a chance to answer the frantic stream of questions, another straight girl will come flying out of the woodwork, jumping to my defense.

"Oh my god, SARAH, that's so ridiculous that you would even ask Zara those questions! We all know Zara is, like, a real lesbian, so she's never HAD SEX WITH A GUY IN HER LIFE. Plus, she only has threesomes with girls. DUH."

Meanwhile, I don't have threesomes (only because I'm wildly selfish and want all the attention), and I have hooked up with plenty of dudes.

But I rarely pipe in because I find all the myths surrounding lesbian sex wildly fascinating, and I want to hear MORE.

Straight culture fetishizes lesbian sex so intensely that, sometimes, I secretly wish we were as kinky as they think we are.

But the time has come for me to debunk some of these kinky myths you have about the way we DYKES get ~down~ and ~dirty~:

"I haven't had sex with a guy in almost a decade!" I proudly boasted to a friend once. We were sitting on a beach in little bathing suits, drinking vodka out of plastic water bottles.

Some random straight dude was with us. He puffed on his Newport Light cigarette and said, "Wow, you must be really tight."

Now, I should've been offended, I know, but once again, I was too humored by the ignorance of this little boy creature to be mad.

COME ON, guys. What do you think us girls are doing between the sheets? Braiding each other's hair?

No, we're having SEX.

"Oh, people are so stupid about lesbian sex," a smug straight friend of mine once said to me. "Like, ew, people think you guys actually scissor. Dumb idiots. Everyone knows scissoring isn't a thing."

"That's interesting because I've been scissoring since 10th grade!"

My straight friend was immediately at a loss for words. It was like I told her Santa was real.

To be fair, though, I've heard this rumor MANY times. And usually, it's from a well-educated, overprotective straight woman who wants to protect me from being fetishized.

And I appreciate the sentiment — I really do!

Not all lesbians scissor, but a lot of us (me) like to have a nice scissor sesh from time to time. It might result in an occasional, accidental kick in the head, but I'm into sex injuries!

"Oh my god, Zara, you need to hook up with my friend! She's so hot," a cute gay boy said to me at brunch last year. I was in my single prime and thirsty!

"Show me!" I demanded, feeling ravenous.

He eagerly pulled out his phone and showed me a picture of a really girly girl, with fake boobs and hair extensions galore.

"IT'S NOT?" He clutched his imaginary pearls. "But like, you're so dressy, and she's so dressy. Like, why not?"

My type is a little edgier and a little more badass. A girl who can cut you with razor sharp beams of sexual prowess. A girl who wears leather pants and MEANS IT.

But two girls with hair extensions? That's just too much weave for me.

"I  mean, you guys don't HATE dicks right? Like, you aren't repulsed by them," a girl once asked me.

5. None of us have EVER slept with men.

Recently, I was with a big group of straight girls who were talking about how gross giving head is.

A stunned silence fell upon the group.

Finally, a brassy redhead buyer for Saks Fifth Avenue spoke on behalf of the group: "But you're a lesbian."

"Then how are you a lesbian? You're bisexual," a small blonde accused, looking as if I'd falsely betrayed her with my faux lesbian-ness.

And once again, I should've been offended, but I was far too amused to be pissed off or to get into it.

BUT LOOK, just because I slept with men when I was a sexually confused teen, doesn't mean I'm not a lesbian. In fact, I could sleep with a man tomorrow and still be a lesbian. (GAG. I won't, but hypothetically, I could.)

I love women, I sleep with women and I'm not attracted to men. Therefore, I'm a LEZ.

FYI: The only lesbians who haven't slept with men are called "goldstar" lesbians, and while it's a coveted title, they're a very rare, exotic breed of lesbian.

6. There are "man" and a "woman" roles in the bedroom, and they never change.

"You're so LUCKY you don't have to deal with men! All men care about is sex!"

All the years of pent-up sexuality will come pouring out of you, and you become an animal.

Plus, you're not dealing with the patriarchal stigma of being labeled a "slut," so you're sexing as much as possible.

And, girl, have you even been to a lesbian bar on a Friday night? It's a meat market like you've never seen before. It's teeming with palpable sexual energy, and it's overwhelming (in a good way)!

We're just as ruled by the planet of SEX as anyone else is.