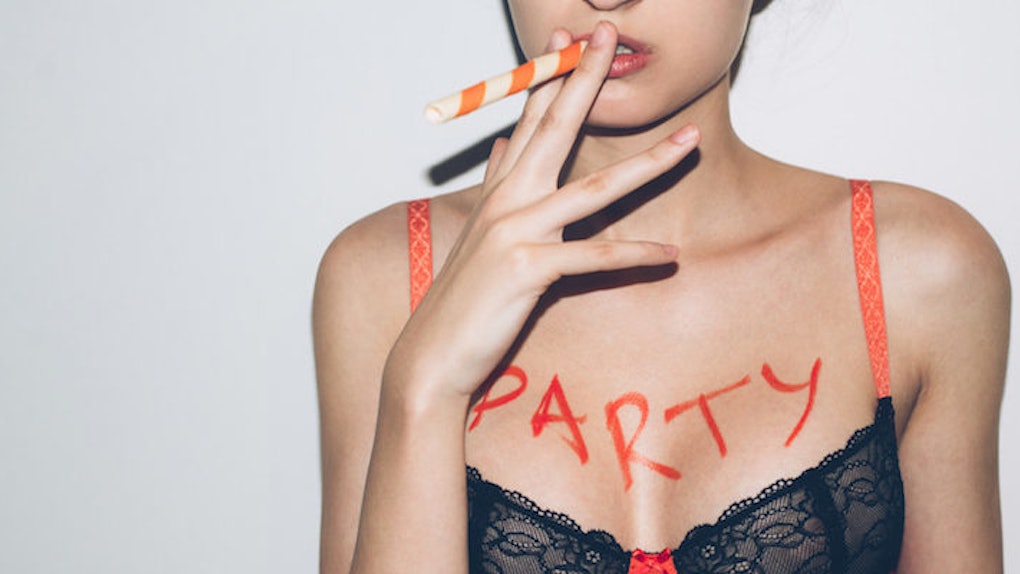 "So Zara, when did you, like, know you were like a lezzzbiiiiian?" a sleek-haired brunette named Kate* asked me after consuming her third cocktail.

She fluttered her long, thick lashes right at me as she stumbled in her chic stiletto ankle boots.

I was in the middle of a group of straight girls I had met in an acting class. We were standing outside of a very heterosexual bar in Midtown, the kind with a crowd made up of former high school jocks who peaked at the junior prom.

"Yeah, Zara tell us! How did you, like, know for SURE? Do you know FOR SURE?" Megan*, a blonde, blue-eyed former Ms. Teen Texas slurred at me.

"ZARA, TELL US. WHEN DID YOU, LIKE, F*CK A GIRL FOR THE FIRST TIME? IS THAT WHEN YOU KNEW YOU WERE A LEZBIIIAN?" Brittany* shouted into my ear before screaming at a sweet-looking, baby-faced boy who accidentally looked in my direction.

"HEY -- DON'T HIT ON HER SHE'S A LEZZZBIAN. SHE'S NOT F*CKING INTERESTED, GO F*CK YOURSELF!"

You're confused. I get it. You're wondering why the f*ck I'm getting drunk with a group of sorority girls on a Wednesday night. Well, for better or for worse, these crazy straight girls are my friends.

Anyway, it's not like I'm not used to the aforementioned scene. Every time I'm hanging around a new "straight" friend, as soon as the buzz of booze sets in, I get interrogated with very personal questions about my sexuality.

Heterosexuals are fascinated by lesbian sex. I've had corporate bosses, bro-types, newly engaged coworkers and sorority girls alike ask me how I do it, who I'm doing it with and, mainly, when I first started doing it.

I know I should be offended. But after 29 years on planet earth, I can tell the difference between being fetishized by a f*ckboy and when an innocent human is simply curious about something unfamiliar to them. (I don't indulge the f*ckboys. Girls, never indulge the f*ckboys.)

I mean, I get it. I'm kind of curious as to how you knew you were straight. I'm dying to know how you all do it. Where you do it. When you first did it. Sexuality is just interesting.

Regardless of our sexual orientation, haven't we all had that one sexual experience that sparked the lust within us?

Mine happened to be the summer between my junior and senior year in high school, drunk off Everclear at an ill-advised house party when my parents were out of town.

For those not in the know: Everclear is a disgusting, plastic-bottled grain alcohol that is 190 proof. 190 proof.  There is no need f*cking need for 190 proof.

It was about 3 am, and only the hardcore partiers were left lingering around. I was wasted, but energetic wasted, the kind of hyperactive drunk that only someone under the age of 21 (or high on cocaine) can achieve.

Somewhere between two and 5 am, the party dwindled down to just three people. (They say everything happens in threes, right?)

It was me, my gorgeously exotic, ethereal-looking new friend, Blue*, and a massive, olive-skinned boy whose name I can't recall for the life of me.

I don't know how it happened. Maybe it was the thick summer air revving up our repressed teenage hormones. Maybe it was the fact that we were all relatively attractive, single youngin's discovering our sexual prowess for the first time, at the same time.

Maybe we were just f*cked up on Everclear. It's always easy to blame the Everclear.

But before I knew it, I was passionately making out with Blue. Her lips were as soft as a 1,000 thread count pillow, and she smelled like an expensive vanilla candle. I couldn't tell if I was intoxicated from grain alcohol on an empty stomach or by Blue.

"I think I have a crush on you," I breathlessly confessed to Blue, feeling suddenly sober and slightly intimidated by the weight of my feelings.

"I think have a crush on you too," she slurred to in my ear, her stoned bedroom eyes undressing me.

"I have a crush on both of you," the boy creature, suddenly appearing. Oh, I had forgotten about him.

He snaked his arm around the both of us. The next thing I know, the three of us were intertwined in my bed, breathing heavily, kissing, touching and doing all sorts of other things I had only read about in books.

Only with each touch, each kiss and each pull of the hair did it become crystal clear that Blue and I were waaaay more into each other than we were this faceless boy creature.

I might have been drunk, but to this day I have a vivid image of that poor teenage boy desperately trying to get in on the action, finally giving up, standing in the corner watching us like a sad puppy who had been kicked out of his owner's bed.

Eventually, he sulked off and left the room. In my mind's eye, he looks like a sad-eyed basset hound, slowly limping away.

Blue and I continued, now free to really get into it. We explored each other's bodies with our fingers and mouths and tongues right up until the sun came up and the birds started chirping.

I woke up hot and twisted in my daisy-adorned sheets, one arm haphazardly strewn across a passed-out Blue. The boy was nowhere to be found.

It was a hangover for the books. I felt so dehydrated; it was like there were cotton balls stuffed into my skull. My head felt like it was being stomped on by steel-toed black combat boots.

But I felt f*cking great because I just had sex with a girl. And it f*cking rocked. It knocked boy sex out of the water.

Blue and I hooked up a few times after that salacious evening but inevitably drifted apart. She had a boyfriend. I had a girlfriend. We lost touch over the years.

But I will never forget her or that boozy night that changed the course of my life forever. I'm even grateful to the boy. I would send him flowers if I could remember his name or knew where he lived.

Because he helped me figure out my sexuality. I had two genders in my bed at the same time, and I only wanted one.

Am I sad that my first time with a girl wasn't some wildly romantic sexual experience with a girl I loved? Nah, save the romance for the fairy tales. My sexual awakening was real, and real is sexier and more interesting over a fantasy any day of the week.