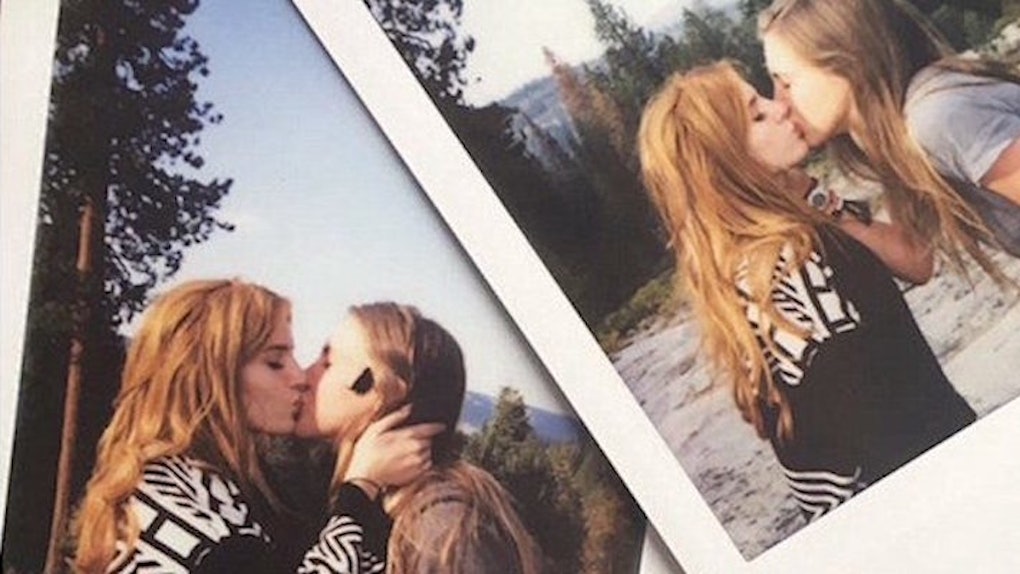 Bisexuality Hasn't Been Accepted As Believable — Until Now

Superstar Bella Thorne, the 18-year-old actress, just came out as bisexual over Snapchat. Yes, that's right. When asked if she was bi, our girl Bella proudly announced YES.

Her fanbase was ecstatic and accepting over her announcement:

It makes me wonder if maybe Gen-Z will be the generation to kick the biphobia to the curb.

For the most part, Millennials have been the most accepting generation of diversified sexuality to date. We're the first generation to really own the "queer" label in an empowering way. We have trans celebrities with big roles in major television shows. We have an out lesbian sex icon and a ton of gay male actors and media personalities. It seems like every day, an actress or pop singer tells the press she's sexually fluid.

All of this is great, groundbreaking and amazing, really. Yet there still remains this bizarre stigma around bisexuality.

Will actresses like Bella Thorne and Halsey (who is technically a Millennial, but speaks to a largely Gen-Z audience) pave the way for people who are comfortable with the bisexual label, but feel like they've had to say they're either gay, queer or fluid in order to gain acceptance from the community?

I know the stigma around bisexuality from personal experience. A few weeks after coming out to my mother as a lesbian at a low-key Italian bistro in the mid-winter of 2010, I was perched up on our kitchen table, my legs wildly and loudly slamming against the wooden cabinets, when somehow the "bi" conversation came up.

"Oh, thank God. I don't mind you being a lesbian, but truthfully, I don't get bisexuality AT ALL."

I was shocked. After 24 years of thinking surely her daughter would marry a MAN who would take care of her "recklessly creative" child, it was easier for her to neglect the idea entirely than it was for her to wrap her brain around the idea of me liking both genders.

And that was just the beginning. It was the tiny seed that planted a wild rosebush of biphobia in my life.

It was the tiny seed that planted a wild rosebush of biphobia in my life.

"You're not, like, BISEXUAL are you?" a hard-looking lesbian once asked me, suspiciously peering at me through the cloud of gray cigarette smoke slowly releasing from her lips.

"No," I answered honestly.

And when she said "bi chicks," she actually put her fingers in the air and made air quotes, as if "bi chicks" aren't a real thing, just a fleeting trend, like Harem pants or nail art. As if bisexuality didn't have enough substance to hold up in the queer community.

Another time, as my friend discussed her next Tinder date with me, she shouted, "Oh God, I hope this chick isn't BISEXUAL, UGH."

You can hardly step into a lesbian bar without seeing a collective eye roll from gay women when a girl has the guts to admit she identifies as bisexual. I don't know one bisexual girl who hasn't faced alienation and adversity from the queer community.

You can identify as trans, genderqueer, fluid, queer, gay or pansexual. But say you're bisexual, and you might as well have said you're straight. You instantly become invisible.

Say you're bisexual, and you might as well have said you're straight. You instantly become invisible.

Even Elite Daily's very own video producing extraordinaire, Sierra Jiminez, who is out about her bisexuality, braced for serious pushback from the lesbian community when she and her girlfriend, model Rain Dove, graced the cover of the popular lesbian publication, Go Magazine.

Rain also got a lot of pushback. When we came out publicly as a couple, she was afraid I would get a lot of hate mail from her audience. And she was right. I did get a lot of hate mail. But I also got a lot of people (some people who were bisexual, and some who were just gay or lesbian) who thanked me because they felt like they didn't fit in with the LGBTQ community because they also felt like the community didn't think they were enough. Not gay enough, not butch enough, not flamboyant enough, etc.

I think it's awesome to celebrate every letter of the LGBTQ+ community, including the +. But it's time for Millennials to take some gems from Gen-Z.

I think it's awesome to celebrate every letter of the LGBTQ+ community, including the +.

I don't want to be forced to call myself anything other than a lesbian because that's what I'm comfortable with. It sounds and feels right to me.

On the same note, bisexuals should be celebrated and embraced by the community for owning a label they identify with. And the first step to this revolution is visibility.

Bella Thorne announcing — on arguably the most popular social media platform of her generation — that's she not queer, not gay, not fluid, but bisexual, will hopefully not only empower bisexual girls in her generation, but also in mine.