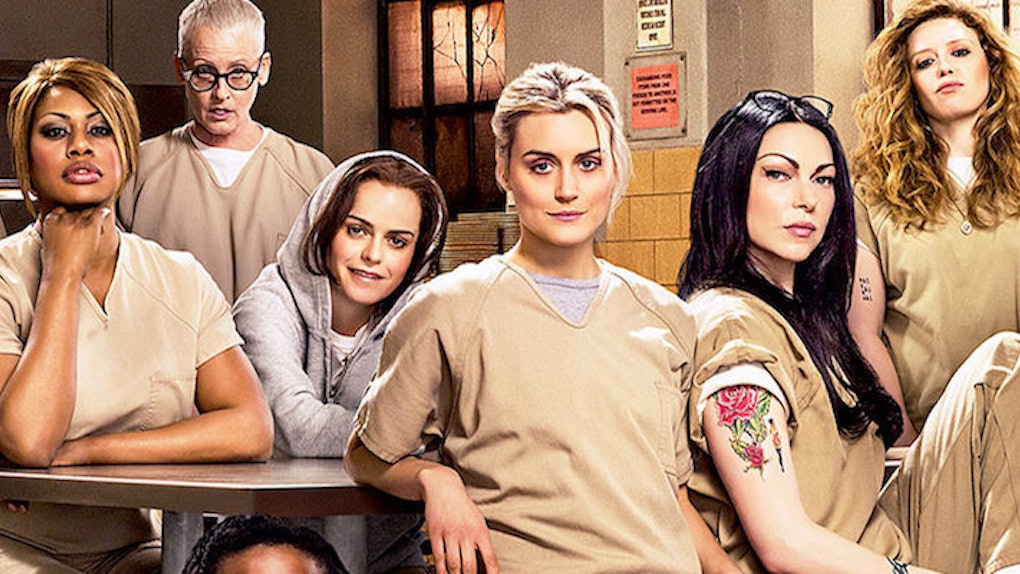 Today is the epic day we've all been waiting for, ladies. It's like second coming of Christ, but better. Season 4 of "Orange Is The New Black" comes out TODAY. YAS, QUEEN.

If you have plans with a lesbian, bisexual or bi-curious woman this weekend, CANCEL THEM. Because you're about to get stood up, honey! We could have plans to attend an exclusive party in a goddamn palace and we'll still ditch them to watch the entire season of OITNB in one sitting. Nothing gets in the way of lady-loving-lady and a new season of OITNB.

We are a fierce cult, led by our fearless, vixen leader, Alex Vause. We pray to the god of Ruby Rose, and get down and dirty in Orange jumpsuits. Don't mess with us. This weekend, we aren't just women. We're badass prisoners who will cut a bitch.

You want to find me this weekend? I'll be an easy find, for once in my haphazard life. I'll be tucked beneath the sheets of my full-sized bed, binge watching my fave show while binging on Oreos.

So what is the prowess behind OITNB? Why are us women so ~riveted~? What exactly is it that draws us in like moths to the flame? Wouldn't you like to know, you curious little kitten...

FINE. I'll tell you, because I love you for clicking on this (I have low standards for love, but that's another issue). It's the GIRLS, duh! We're all just horndogs, hot for the sexy cast.

However, our taste in women is as diverse as the cast itself. Some of us like to swim in the Pipes, while some of us would prefer to drown in the Poussay. And I happen to think that our OTINB crush says a lot about our raw, stripped down SOULS.

Piper Chapman: You're a top.

Oh, blonde, smart, college-educated Piper. Our innocent, little Park Slope princess who was in the wrong place at the wrong time due to a torrid affair with a wicked lesbian.

How can our poor, little dandelion, Pipes, handle FEDERAL PRISON, without a strong, tough babe at her side to forever protect her delicate essence? She can't, baby. That's where you come in.

Alex Vause: You're a bottom.

Alex Vause just oozes sexiness. Something about her just makes us want to be submissive, and bat our eyelashes like a real damsel in distress. So let's not resist our urges, ladies. Let our spectacle-adorned, raven-haired, power babe get on top of us and do whatever the hell she wants. We're sort of afraid of her, but that's what makes her so sexy (purr).

If Alex is your OITNB crush, well honey, you like to be dominated (it's OK, I like it, too!). You're a total pillow princess who just wants to be TOPPED by a bad bitch.

And who can blame you? Being on top is hard; it's a fucking work out. It will give you abs of steel like no barre class ever could. But who really wants to do all that work when Alex could do it for us and give us wild orgasms in the process?

I guess repressing all those sexual desires manifests itself in a fetishes for charming loons locked up in jail? Good to know!

Sophia Burset: You're a CEO.

Sophia is no doubt the sexiest cast member of OITNB. Not only is she sexy, but she's smart. She's stylish. She knows how to do her hair, and act like a proper lady when she needs to. Most of the women in federal prison don't have the epic class that is innate in the soul of Ms. Sophia.

If Sophia is your crush, you're probably a super wealthy CEO who needs a gorgeous, classy lady to accompany you to global work events, help you mingle and keep you in check when you're acting like an asshole. I mean, behind every great lesbian is a even greater lesbian, right?

Tiffany Doggett: You're a cult leader.

Tiffany, our favorite, five-foot, former meth head is sexy in her own way. She's looking really good since she got those ratchet, jank teeth fixed, huh? But she still seems so frail beneath that tough, white-trash exterior, doesn't she? She's fallen off the Jesus track and it's up to you, my cult leader, to prey on her vulnerability and recruit her into your cult ASAP before you lose her to the Scientologists.

I mean, she has all the perfect cult qualities: a damaged past, a former drug addiction, a tendency to get crazy religious. What are you waiting for, culty? Strike while the iron is HOT.

Nicky Nichols: You're a gold digger.

Nicky Nichols, with that wild, wild hair and big, pressing eyes, is HOT AF. She's a real life lesbian, but she's not just any ordinary lesbian; she's a trust fund lesbian. She's spent her summers in the Hamptons with her society hostess mother, she went to boarding school in Connecticut and she probably wore a Gucci onesie as a goddamn baby.

And even though she's in prison, she's still oozes money. You can take the girl out of Fairfield County, but you can't take the Fairfield County out of the girl. She makes that orange jumpsuit look like it's YSL. And that hair! That hair is the result of some mega-rich genes. The fatter the wallet, the bigger the hair, baby.

This is where you come in, you little gold digger. Get with Nicky and live off that boundless trust fund before someone else (me) does. I mean, who is going to spend all that money for her while she's locked up?

The rise of Ruby Rose last summer had women all across the world suddenly questioning their sexuality. Ruby does have that super sexy androgynous swagger that drives straight women WILD, doesn't she? If Ruby is your crush, well, chances are, you're new to the girl game. Welcome to the dark side. We lesbians love of us some fresh meat.

Tasha "Taystee" Jefferson: You're a masochist.

Tastey is a total heartbreaker. I mean, what she did to poor, starry-eyed Poussey was brutal. Painful to watch, my poor eyes bled! But who can resist her? She's gorgeous, she's charming and her mind-blowing sense of humor is contagious.

But don't you know that girls like her will always leave you scratching in the dust, nursing a wounded heart? Haven't you learned your lesson by now? NO. Of course you haven't. Masochists never learn their lesson. In fact, I think you sort of enjoy the pain of a shattered heart, don't you, you dirty, little freak?

Dayanara Diaz: You're ready to be somebody's "daddy."

It's no secret that Dayanara's eggo is preggo. And she rocks "pregnancy/new mom chic" like no one else. Her skin glows as a motherly energy radiates through the prison. Even when her hormones are out of whack, she's a total hottie.

And you're ready to be a "daddy," aren't you? The question is, what kind of ~daddy~ do you want to be? After all, in our crazy, homo world, "daddy" can mean many, many things.

Look, I'm not throwing damaged people under the bus here. Poussey happens to be my personal crush, and since we all know I'm a crazy bitch, I'm just going to pull from the well of myself.

To my fellow Poussey lovers, we have problems. We've been through shit. We have more issues than the New York Post. We need some stability, babes. And Poussey, regardless of her painful past, has a stable core that we are fiercely craving. She'll listen to our shit. And you know we like a woman who will listen to our shit (few do).

Lorna, our pathological, slightly crazy, red-lipsticked vixen, is HOT in the most undeniably feminine way, right? I sort of identify with our girl Lorna. I'm a crazy bitch with red lips, too, and let me tell you: We're fierce.

You have good taste. You like a girly-girl. A classic "femme." Just don't screw with us. We might look like just a pretty face, but hell hath no fury like a woman in red lipstick.

We'll either leave our red lipstick kisses all over your body, or we'll smear it across your freshly painted white walls. And then stalk the shit out of you and your new girlfriend until it gets to the point of danger and we get sent to federal prison.

Big Boo: You have daddy issues.

If you're crushing on Big Boo, you probably have daddy issues. But hey! That's OK! Big Boo will be a great partner and will totally help you work through your childhood trauma! She will take care you, and you will be safe in the strong arms of Big Boo! She'll even make sure you brush your teeth before bed.