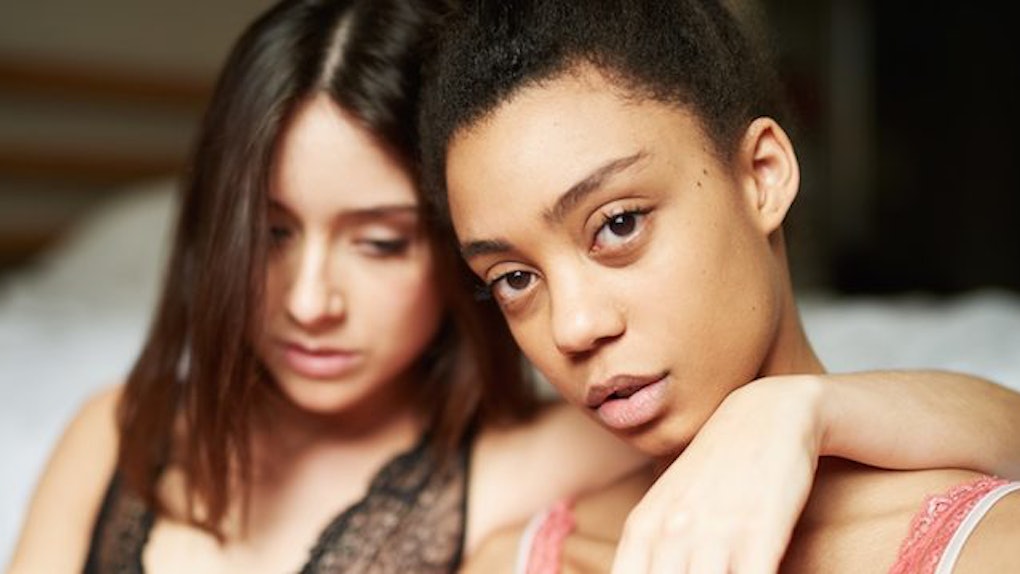 What To Ask Yourself If You're Questioning Your Sexuality

"I'm questioning my sexuality. Does that mean I'M GAY?" a teenager asked me a few weeks ago.

I told her no, absolutely not. But at the same time, it doesn't mean she isn't gay either.

"What do I want to do with my life?" "What kind of haircut should I get?" "Where do I want to live?" "What gender am I attracted to?" "Am I attracted to BOTH GENDERS?" "Does my sex dream about Linda who sits two seats away from me in biology MEAN anything?" "What the hell is going on?"

These are all normal questions for anyone to ponder on a Sunday afternoon.

In fact, I would say almost everyone I know has questioned their sexuality at some point. I've had friends who have been surefire lesbians for a decade, and suddenly, they get confused about their growing feelings for their best guy friend.

I've had young friends wonder if they're bisexual or just bicurious. I've had older friends feel unexpected feelings for the same gender, while they were married to the opposite gender.

Sexuality is complex and layered, and it's definitely not black or white. There are a lot of shades in that rainbow, babe.

It's actually important to question things because it means you're alive. It means you're connected to your core. It means your brain is big enough to push past the realm of its comfort zone and curious as to what it's like on the other side.

On the same note, questioning your sexuality can be a deeply harrowing process. When I was first questioning my sexuality in my early teens, it really fucked with me.

Questioning your sexuality can be a deeply harrowing process.

I wanted answers. I didn't know if everyone had such big lusty feels for their female gym teacher or if it was just me. I wanted to know if the reason I wasn't getting wet for the "hot" boys in school was because I was a late bloomer or because a lesbian.

Now, the truth is, no one else can ever give you definitive answers to these kinds of questions.

But what I've learned (the hard way) is, rather than seeking outside help, turn your curious mind back to yourself and ask yourself these five questions:

Do I see myself going down on the same sex?

Now, this might seem blunt and crass for the first question, but, curious kittens, please hear me out.

This is a very important question to ask yourself. It's one thing to fantasize about kissing the pillowy lips of another girl, and it's another thing to imagine eating her out.

And if you really want to get in relationships/start having sex with women (or dudes, if you're a guy), the thought of going down on the same sex shouldn't repulse you.

The thought of going down on the same sex shouldn't repulse you.

If it repulses you, you might just be attracted to the beauty of the same sex, but not necessarily want to have SEX with them, you know?

Can I imagine a date with the same sex?

When I was first exploring my sexuality, the idea of going on a date with another woman seemed massively terrifying. It also seemed strange. Like, I wanted to know who the hell opens the door for who.

All the heteronormative roles I was used to were suddenly crushed, and I felt like a lost puppy.

However, just because it was hard for me to imagine going on a date with another woman, didn't mean I was straight. Clearly.

In fact, if it scares you, I think it's probably worth looking at a little more closely. (I'm all about looking big, scary fears dead in the eye.)

I'm all about looking this big, scary fears dead in the eye.

When we're attracted to someone, of course we're a little fear-stricken at the thought of an intimate date with them.

If you simply shrug your shoulders, entirely unaffected by the idea of going out with the same sex, you might not really be attracted to the same sex. Because really, what's more terrifying than sexual attraction?

But also, it could just mean you're totally attracted to the same sex, and the idea is so comfortable to you, it's just not really a big thing. Either way, it's a question worth exploring, sisters and brothers (and everyone in between)!

Sometimes, when we admire the same sex, it's so fucking intense, it's almost sexual. Friend crushes totally debilitate me, and my admiration for another woman can feel so powerful, it's almost animalistic.

So it's easy to mix up whether you just want to be this girl or have sex with this girl.

Ask yourself if the butterflies you feel in your stomach whenever she's around are rooted in attraction or admiration. Do you think about her when you're sexually fantasizing?

It's easy to mix up whether you just want to be this girl or have sex with this girl.

Am I being influenced by outer forces?

"Huh?" I asked her perplexed.

"Lesbians have short hair and wear Timberland boots. You have long hair and like glitter."

"Maybe she's right," I thought to myself. If my close friend said there was no way I was gay because I didn't look like the lesbians on TV (were there even lesbians on TV?), then she was probably right. I surely couldn't be gay.

But why was I having these irrepressible feelings of lust for women?

This experience sent me spiraling down an unnecessary web of confusion.

So if you're questioning your sexuality, it's very important to ask yourself if you're being influenced by outside forces.

Are you letting what your parents think about queer people influence what you're feeling inside? Are you letting the fact that everyone assumes you're gay because you play softball guide you?

Try to isolate your thoughts and ask yourself, "If no one was around judging my sexuality at all, who would I be attracted to?" Often, the answer is right there, babe.

Am I letting fear win?

This can go both ways. I've known women who have been burned so badly by men, they turn to women in hopes they won't have their hearts crushed by an evil male creature again.

This works for a few years... until they become sexually frustrated and go back to men.

I also know women who have been so wildly in love with other women, but they were so afraid of being a target of hate, they swallowed it deep inside themselves.

You should never let fear influence your decisions when it comes to your love life.

Either way, both women let fear dictate their sexuality. And you should never let fear influence your decisions when it comes to your love life, kittens.

If you're having feelings for another woman, don't run from them because you're terrified of what others are going to think. Because you know what's scarier? Living a life that's not true to yourself.

You know what's scary? Living a life that's not true to yourself.

And if you do stuff whatever you desire down out of crippling fear, eventually, your spirit will want what it wants, and you'll find your way.

Sexuality has a way of working itself out because our sex drives are a powerful force. Your sexual prowess will figure everything out for you.