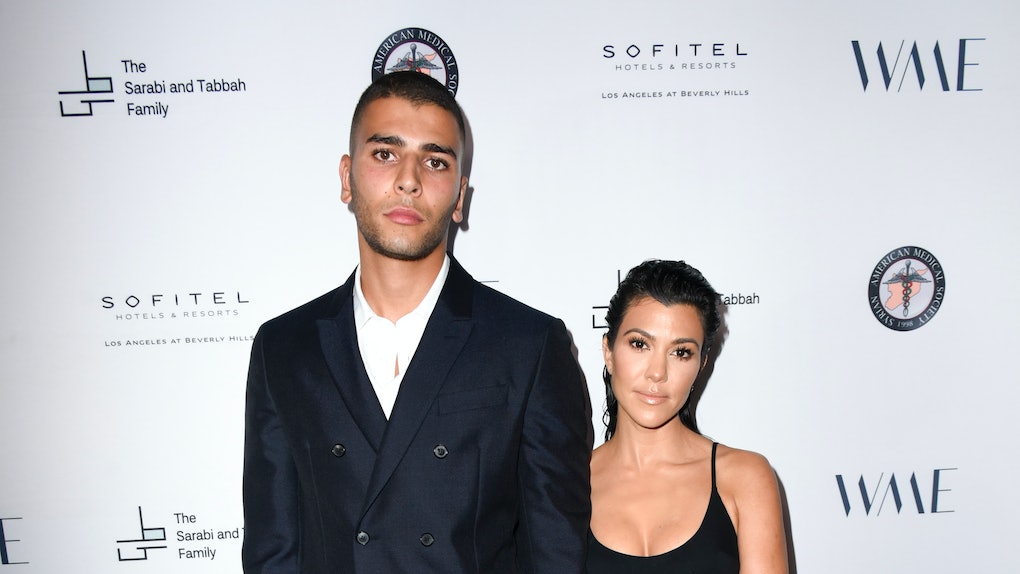 It's no secret Shanna Moakler isn't a fan of her ex-husband's new girlfriend. However, it appears she isn't the only ex feeling salty about the drummer's budding romance. Younes Bendjima seemingly shaded Kourtney Kardashian and Travis Barker by posting a very pointed Story, which likely referred to that sexy Instagram Kardashian posted with her man on April 26. "Just Like Heaven," Kardashian captioned the pic, which shows her smooching Barker in a barely-there bikini in the desert. Soon after, Bendjima posted an IG Story that read, "Shamelessness has become so normal in today's society that modesty has become strange," before deleting the Story. Yikes.

Kardashian and Bendjima first met in October 2016 following her split from Scott Disick, though she didn't confirm their relationship until a year later. The couple dated for nearly two years before reportedly calling it quits in August 2018, and an insider for Us Weekly claimed Kardashian ended things. "There's little chance of Kourtney and Younes getting back together," the source claimed. "He'd have to grow up. There were a number of reasons it didn't work, but at the end of the day, the main reason was a maturity issue." But it seems like Kardashian's social media activity was also a point of contention during their relationship.

Back in July 2018, not long before he and Kardashian reportedly went their separate ways, Bendjima criticized one of his girlfriend's sexy bikini snaps, sparking outrage among fans. "thats what you need to show to get likes?" he wrote in a since-deleted commented. At the time, a source for E! News claimed Kardashian was upset by Bendjima's "impulsive" criticism. "Younes gets jealous and can be possessive of Kourtney," the insider claimed. "When she posts half naked pictures, he gets very upset. He wants her for himself and doesn't want to share her with the world."

Just a month earlier, Bendjima seemingly threw shade at the whole Kardashian family after Kardashian's sister Khloé called Bendjima "toxic" and "negative" during the March 25 episode of Keeping Up With the Kardashians. "Do yourself a favour. Surround yourself with those who speak of visions, ideas, goals, growth. Not those who sit and gossip about others," Bendjima wrote in an IG Story after the episode aired. "And if you do find yourself in that situation, excuse yourself and walk away. The game ends when you choose to leave such a gathering." Hmm...

Something tells me haters aren't going to keep Kardashian and Barker from continuing to flaunt their love all over IG. In fact, it's possibly only a matter of time before these two make things official. "Kourtney and Travis are so happy together," a source for Us Weekly claimed on April 26. "And friends think they absolutely will be getting engaged sooner rather than later." Things may be progressing quickly for the pair, but — unlike some people — I'm definitely not mad about it.