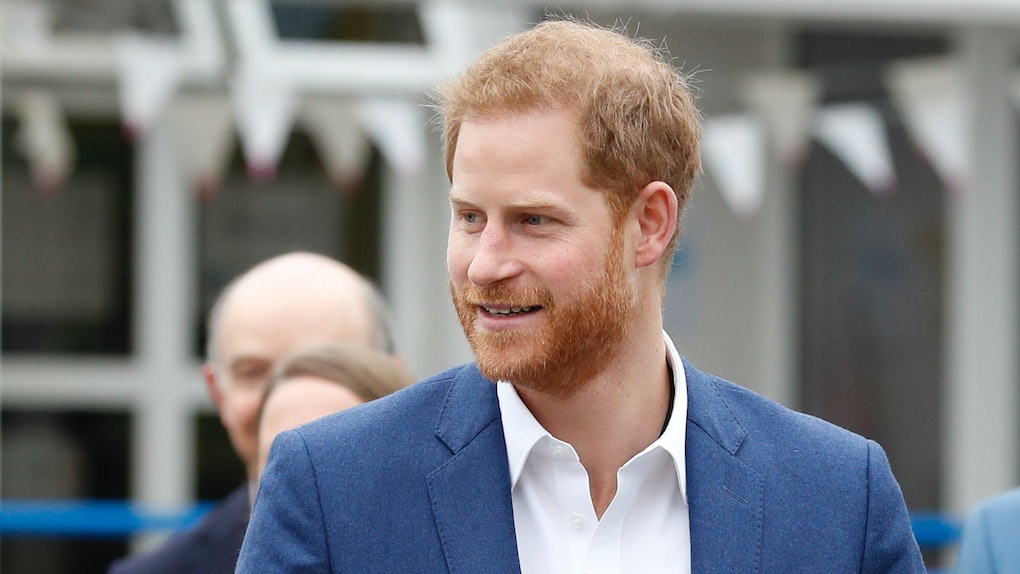 Will Prince Harry Go On Paternity Leave? A Royal Expert Just Weighed In

Remember back in October 2018, when we first found out that Meghan Markle and Price Harry were expecting their first child, due in the spring? April seemed about a billion years away at that point. And while it feels like the Duchess of Sussex has been pregnant forever, she's now likely just a few short weeks away from giving birth to baby Sussex! I don't know how we got here, fam, but I'd be lying if I said I wasn't super-stoked about it. Markle is already on maternity leave — her last royal commitment was on March 11 — so will Prince Harry go on paternity leave? According to a report from Us Weekly, it's looking pretty likely that he will.

"It’s a modern thing," royal expert and former Queen Elizabeth II spokesperson Dickie Arbiter told the publication. "Prince William did it for his children [with Duchess Kate] and Harry’s going to do it for his, when his child is born. I mean, the older generation didn’t do it. The older generation just got on with it. But it’s a new thing. People do it, William did it and Harry is going to do it. [The length] depends on him. I would have thought no more than about two or three weeks."

Elite Daily reached out to Kensington Palace for comment of the report, but did not hear back. But from the looks of it, Prince Harry seems to already be a doting dad and the royal babe's not even here yet!

Kensington Palace first shared the news that the couple had a baby on the way on Monday, Oct. 15. They posted a photo of Meghan and Harry on the palace's Twitter account, along with the following statement:

Since the big announcement, the Duke and Duchess of Sussex have not let anything slip about the sex of their firstborn. But according to a Feb. 27 report from Us Weekly, Meghan is reportedly pregnant with a baby boy! Elite Daily reached out to Kensington Palace previously for comment on the report at the time, but did not hear back by the time of publication.

So where did this rumor even start? A source told Us Weekly that Markle reportedly told friends she was having a boy during her star-studded baby shower on Feb. 20 at The Mark Hotel. My guess is that if this was actually the sitch, it probably all went down somewhere between the flower-arranging lesson and the dessert-tasting experience overseen by renowned chef Jean-Georges Vongerichten.

Either way, boy or girl, one thing is clear — if the prince has his way, the royal couple's firstborn will live his or her life far, far away from the limelight. And, man, I just love Prince Harry for being so down-to-earth like this!

"[He] grew up with the entire world watching his every move, which has made him very private and somewhat resentful of the role he was born into," a source told Us Weekly. "He does not want that for his own children."

More like this
Meghan Markle's 'The Bench' Children's Book Was Inspired By Prince Harry In The Sweetest Way
By Sydney N. Sweeney
Kendall Jenner's Response To Being Called A "Bad Example" Didn't Hold Back
By Cianna Garrison
Is Olivia Rodrigo's "Good 4 U" About Joshua Bassett? Fans Are Convinced
By Michele Mendez
Stay up to date