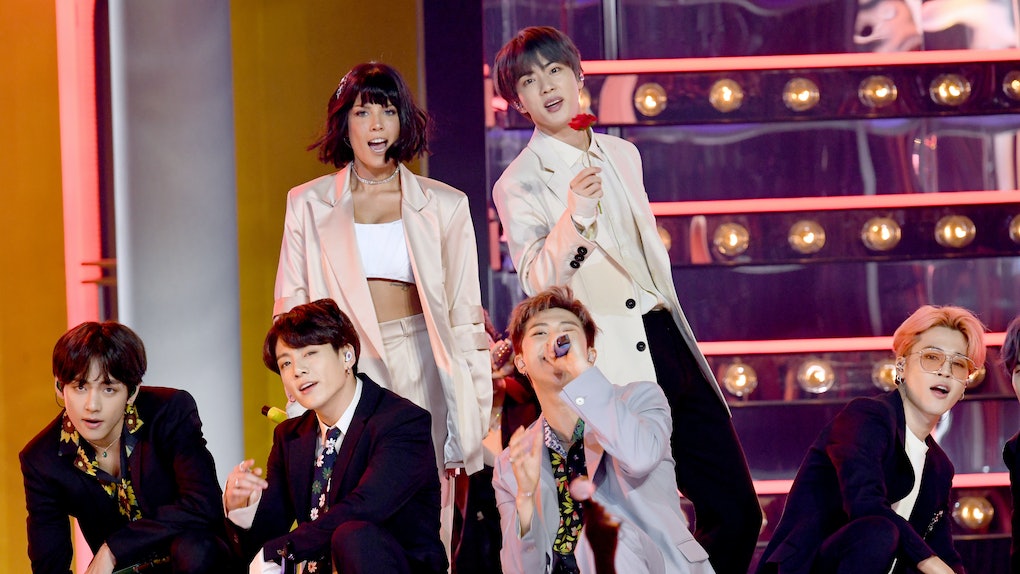 Will BTS Perform With Halsey At Jingle Ball 2019? Here Are The Chances

On Friday, Sept. 27, iHeartRadio finally revealed its 2019 Jingle Ball lineup. This year's annual holiday tour is jam-packed with the best artists, including Taylor Swift, Lizzo, Camila Cabello, Billie Eilish, 5 Seconds of Summer, the Jonas Brothers, Niall Horan, Halsey, and — you guessed it — BTS. You were waiting for that one, weren't you? Anyways, that's just a snippet of all the artists performing on the Jingle Ball tour this year. That's right — those are only some artists, because there are so many more. And now, because BTS and Halsey will both be performing at the Dec. 6 Jingle Ball concert at the Forum in Los Angeles, fans are asking, will BTS perform with Halsey at Jingle Ball 2019? Listen, they haven't confirmed anything, but it seems pretty likely. They have a song together, after all.

BTS and Halsey dropped their banger of a collab called "Boy With Luv" on April 12, along with its music video. FYI, that was also the same day BTS dropped their record-breaking album Map of the Soul: Persona, so you can imagine just how happy (and overwhelmed) the BTS ARMY was on that day. Fans were already excited for BTS to release their album and music video, but the fact that BTS' lead single featured Halsey just made BTS' whole comeback that much more amazing.

To top it off, BTS and Halsey performed "Boy With Luv" together for the very first time at the 2019 Billboard Music Awards on May 1.

Since then, the BTS ARMY has been head-over-heels in love with BTS and Halsey's friendship. They've given each other so many shoutouts in interviews, and they even caught up with each other a few times after their iconic BBMAs stage.

Just a few weeks after BTS and Halsey performed together, they saw each other again in New York City. On May 31, BTS did an interview with Elvis Duran and Halsey surprised them in the middle of the interview. RM, Jin, Suga, J-Hope, Jimin, V, and Jungkook were so happy to see Halsey again.

Halsey then met up with BTS again at their June 7 Love Yourself: Speak Yourself concert in Paris. Keep in mind, Halsey had a concert at London's Wembley Stadium on June 8, so the fact that Halsey made a quick stop in Paris just to see BTS and perform "Boy With Luv" with them again was so special.

Considering Halsey went all the way to Paris to perform "Boy With Luv" with BTS, it's not a stretch to say she and BTS might perform together at their Jingle Ball stop. In fact, the BTS ARMY is already expecting Halsey and BTS to reunite and take the stage together for a performance of "Boy With Luv" once again.

If they don't perform "Boy With Luv" together, I'm at least expecting an interaction between Halsey and BTS backstage. But, like, also, not performing together would be a huge missed opportunity, so they probably will, right?

Anyway, hopefully, they share some more pics of their meet-up. It's definitely been a minute since Halsey and BTS last caught up since the Paris concert on June 7, so I'll keep my fingers crossed for a BTS and Halsey reunion on stage soon.