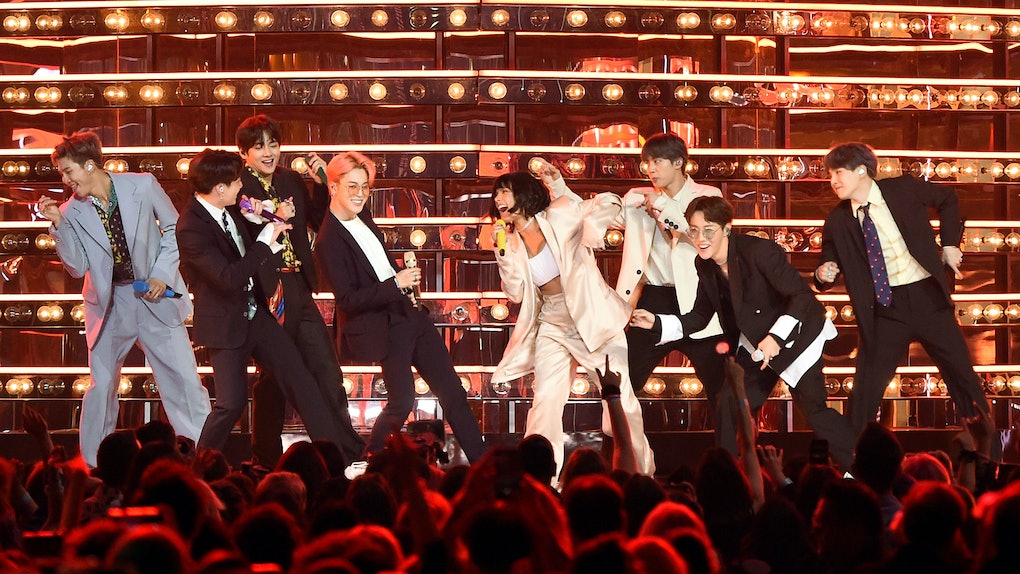 This Video Of BTS & Halsey's Surprise "Boy With Luv" Performance In Paris Was So, So Epic

Sorry, every ARMY out there in L.A., Chicago, New Jersey, Brazil, and England. You are about to be rocked by a wave of jealousy like you've never experienced before, because the most unbelievable thing just went down at BTS' Paris concert: Halsey just... showed up. Of course, your wave of jealousy will only last a solid 10 seconds before it gives way to excitement and joy that the Parisian ARMYs got to experience such an epic surprise. Because let me tell you, this video of BTS and Halsey's surprise "Boy With Luv" performance in Paris is beyond epic.

Here's what went down: The boys did their usual little smolder catwalk thing. You know what I'm talking about: RM walks down the extended stage and — in a move befitting an Avengers battle scene — Suga and Jin join him. Then Jungkook and J-Hope casually slide into frame to strut their stuff down the catwalk. Then, finally, Jimin and V join in on the smolder train. None of this should have come as a surprise for ARMYs since the boys have done it at every concert up until this point — and things continued as usual.

Jimin kicked off the song singing, "Modeun ge gunggeumhae / How’s your day," and the boys joined in in the song and dance. Everything was going as expected until the bridge when the moving VCR screens behind the boys began to lower, revealing Halsey hiding out behind them in a pair of high-waisted jeans, a white crop top with a pink, mesh shirt over it to match the boys' costumes, and a shock of hot pink hair. Boss. As soon as the VCR screens had lowered all the way, Halsey busted out running to join in on the performance with the boys — and it was essentially the Billboard Music Awards all over again!

Check out the entire, life-changing moment below:

What's so great about this whole moment is that it didn't even seem to register with the ARMYs in attendance that Halsey had popped up on stage. Fans just continued to bop to the music and sing along like nothing out of the ordinary was happening until Halsey visibly split BTS' usual formation and started doing the "Oh my, my, my" dance — at which point, the ARMYs registered what was going down and started screaming and hollering like I'd expected from the start. I think I heard their screams from my desk in New York City.

Here are more angles of the brillz performance:

What was most epic about the performance was that, during the second round of the chorus, Halsey exclaimed "I want it!" passionately for the whole stadium to hear. Up until this point, she'd never sung that part of the song live, but considering it has become a gag that the boys clown her with in her absence at every concert, I'm sure she was eager to get in on the joke.

At the end of the performance, Halsey said a bunch of nice things to Paris fans in French as the boys watched on with delight. And, of course, J-Hope had to get Halsey to give the fans one more "I want it!" before she gave all the boys hugs and exited the stage with a majestic, "Au revoir!"

Paris... you are some lucky AF ARMYs!

More like this
Here's Why EXO's BAEKHYUN, CHANGMO, & Raiden's "Runner" Is The Perfect T1 Theme Song – EXCLUSIVE
By Michele Mendez
TikTok's Trailblazers: These Creators' Ideas Went Viral Without Them & It Needs To Stop
By Brandy Robidoux
These Tweets About BTS' 'Bang Bang Con 2021' Sum Up The Epic Performance
By Cianna Garrison
Stay up to date