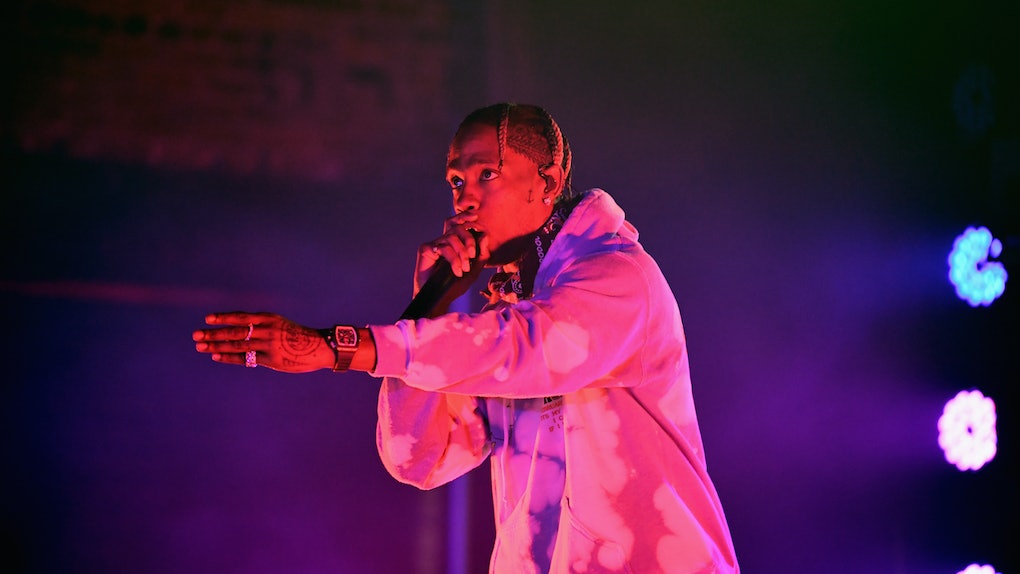 Why Was Travis Scott Bleeped At The 2019 Super Bowl? His Songs Are Full Of Expletives

Between Maroon 5 opening the halftime show with a few throwback bangers, and Travis Scott taking the stage to perform part of "Sicko Mode," I feel like I have whiplash from all the action. But there's one question stuck in my mind: Why was Travis Scott bleeped at the 2019 Super Bowl? The rapper was bleeped out pretty early into his set, and had fans typing out question marks faster than the Maroon 5 releases songs.

Scott was in the middle of singing the first verse of his hit single when he was unexpectedly bleeped out. Here's the exact line that Scott was singing when he was reportedly censored: "Yeah, Jump Out boys, that's Nike boys, hoppin' out coupes. This sh*t way too big, when we pull up give me the loot." Scott was most likely bleeped out for the expletive in the second line, as the Super Bowl is a nation-wide, family-friendly, live, televised program. There are many American households that allow their kids to stay up late just to see who walks away with the Super Bowl ring, so it makes sense that the live programming might make an effort to keep it's broadcast as PG as possible.

The Twitter-verse immediately reacted to Scott's bleeping fiasco. Some fans voiced anger or annoyance that Scott was getting bleeped out, claiming that it was difficult to follow his performance with pieces of the lyrics missing. Others complained that having the rapper perform was in fact "pointless" if broadcast was just going to bleep out so much of his verse. Whether you thought Scott's bleeped-out verse was totally hilarious or a complete fail, the line's reaction as proved one thing: that America was watching closely.

Scott's performance isn't the only thing making headlines tonight: Fans, spectators and media outlets alike are holding their breath after stirrings of engagement speculation to girlfriend Kylie Jenner. Exactly 364 days ago, on Super Bowl Sunday 2018, Jenner and Scott announced a birth of their first daughter, Stormi Webster. The two just celebrated her first birthday on Feb. 1, with adorable Instagram tributes and a family vacation. In fact, Scott included this sweet note to his firstborn in his caption —

ITS MY QUEEN ,MY HEART, MY AIR , MY EVERYTHING. STORMI’S BIRTHDAY TODAY. I LOVE U SO MUCH BABY. U THE SMARTEST AND LOVING BABY EVER. UR SPIRIT KEEPS ME GOING EVERY DAY ME AND UR MOMMY LOVE U AND CANT WAIT TO SHARE MORE BEAUTIFUL DAYS WITH U. HAPPY BDAYY STORMIII LETS RAGE.

I'm not crying, you're crying. Anyway, as Scott was performing, I couldn't help but cast my eyes towards the bleachers, to see if Jenner was in attendance tonight. She hasn't been spotted in the stands yet, but her BFF Jordyn Woods did post a snap to her Instagram story from the Super Bowl. Knowing this dynamic duo, if Woods in attendance, Jenner probably isn't far behind.

Personally, I had my money on Scott using his performance tonight as an opportunity to propose. But I suppose Scott wants to keep us on our toes, and it's working. However he chooses to pop the question, I'm sure he'll do so in a pretty *bleeping* fire way.

More like this
10 Taylor Swift Songs To Listen To When You’re Falling In Love
By Rachel Shatto
These Tweets About BTS' 'Bang Bang Con 2021' Sum Up The Epic Performance
By Cianna Garrison
With 'Like Water,' Wendy Found Her Biggest Cheerleaders In Her Red Velvet Bandmates
By Michele Mendez
Stay up to date