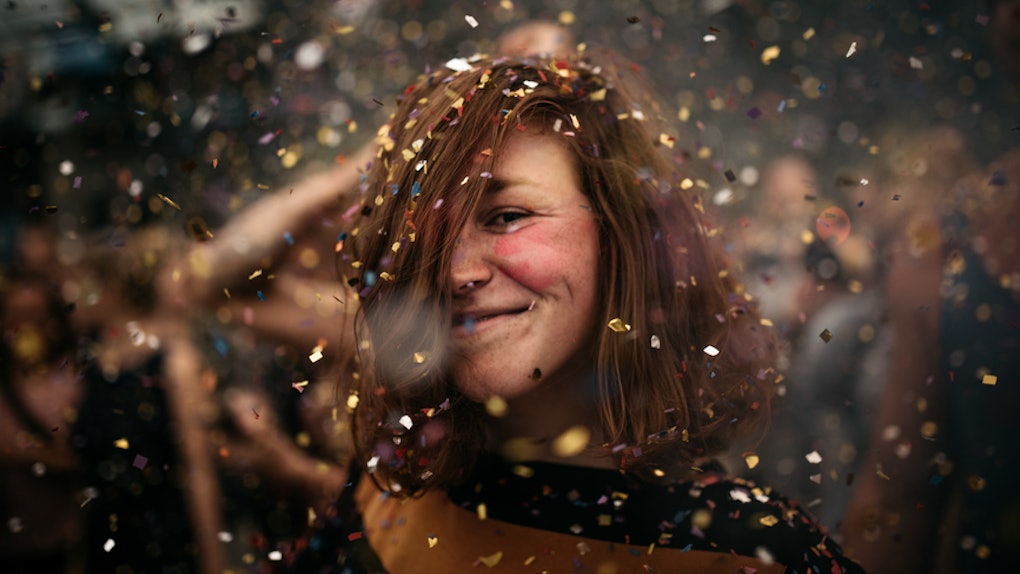 If you've been waiting for a sign to commit to Taylor Swift's Reputation tour, then you can officially look no further: According to new research, going to concerts is good for your health, and what's more, it may even help you live longer. Now, in some ways, you probably already knew that seeing live music is good for you and your well-being. I mean, personally, every time I leave a Coldplay concert, I always feel more self-actualized and cleansed than after nearly any therapy session I've ever been to. But the results of this new study suggest that concerts don't just make you feel good; they also might extend the length of your life by several years.

According to the study, which was led by O2, a telecommunications services provider in the UK, and Patrick Fagan, a behavioral science expert who works at Goldsmith’s University, going to concerts and seeing live music on a regular basis can potentially extend your life by as much as nine years. More specifically, the research noted, attending "gigs" at least once every two weeks, even if it's just for 20 minutes at a time, can increase your feelings of well-being (which the researchers defined as a combination of your sense of happiness, contentment, productivity, and self-esteem). In turn, those improved levels of well-being may be linked to a longer lifespan.

In other words, you are officially off the hook for all those times you spent way too much cash on concert tickets.

After all, you were just looking out for your health, right? And you can't put a price on a prime sense of well-being.

In order to reach a conclusion, the study measured people's heart rates and psychological responses while they were at a concert to see how their minds and bodies responded to the stimulation. After just 20 minutes of enjoying the live music, the researchers saw significant changes in several different areas. On average, participants reported a 25 percent increase in their sense of self-worth, a 75 percent increase in mental stimulation, and they reported feeling 25 percent more closely connected with the people around them. All of these measures contributed to a general increase in participants' overall well-being, to the tune of more than 20 percent.

Though this study from O2 doesn't specifically clarify how the researchers connected improved well-being with a longer lifespan, past research has confidently demonstrated similar connections. For example, according to YaleNews, a study published in the November 2016 issue of the journal Health Affairs showed that life expectancy is partially determined by your well-being. In this particular research, well-being was characterized by your "physical, emotional, and social health."

Another study, published in the journal Global Health Promotion, revealed a similar correlation between a whole country's overall well-being and the average life expectancy of its citizens. The research involved people from more than 50 countries, who were all asked to rate their overall happiness with their lives on a scale of one to 10. According to the study, for each additional unit of the scale, a person's life expectancy increased, on average, by about four years.

So basically, when you decide to splurge on tickets to a Beyoncé concert, you're actually taking a subconscious step toward ensuring you'll be going to a Blue Ivy concert by the time you're 80-something years old. That's pretty wild to think about, right?

Of course, your own perceived well-being isn't an entirely concrete science — at least, not yet.

Most people feel a wide range of emotions across any given day, so the way you feel during your favorite artist's concert might not necessarily reflect your overall well-being when you leave the music venue. But the take-home message of this study is clear: Making a point to go to more events that do put you in a positive, healthy mood will help increase your overall well-being, and in turn, may even help you enjoy more time on this lovely planet we call Earth. The key, it seems, is to do these types of things more frequently; it's not about going to one big, blowout smash annually, but rather, attending live shows as regularly as possible.

Of course, your bank account probably can't quite handle regular Beyoncé concerts, but rest assured, Queen Bey isn't your only option for live music (even if she is the best option). Instead, try taking note of which bars or restaurants in your area frequently host live music from local bands. There will probably be nothing more than a small cover fee to get in, and then you'll be able to reap the benefits of increasing your well-being without totally draining your savings.

In the meantime, yes, you can — and should — save up for T-Swift's Reputation tour, or for Beyoncé and JAY-Z's On the Run 2 tour — or both! Remember, it's for your health, so why not splurge a little?

More like this
I Tried Singing While Running Like Miley Cyrus & OMG, My Lungs
By Rachel Varina
TikTok’s Taylor Swift Era Trend Documents Your Throwback Swiftie Evolution
By Rachel Chapman
BTS' Inkbox Temporary Tattoos Collection Is "Dynamite"-Inspired, So Take My Money
By Marisa Casciano
Stay up to date