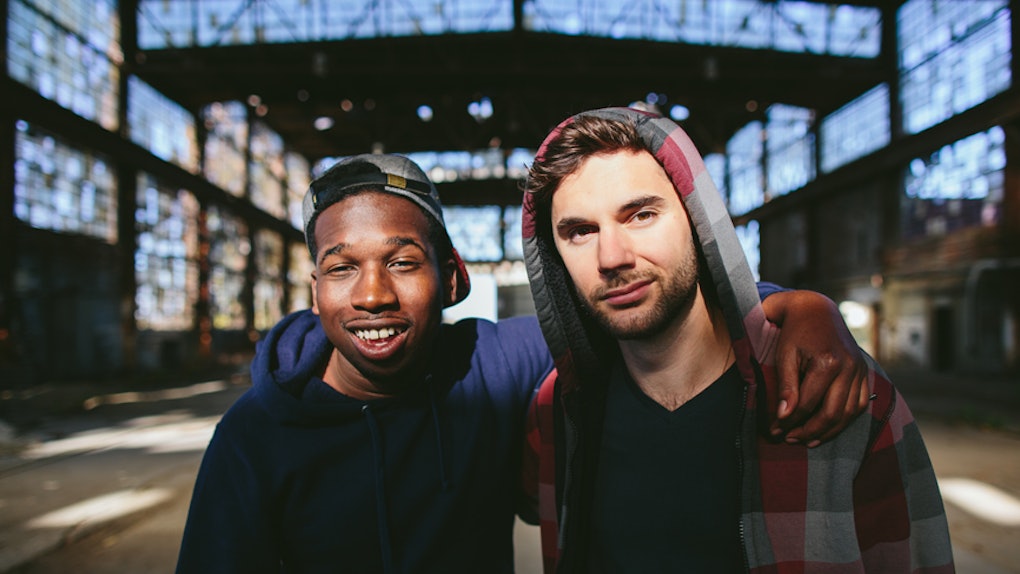 Why Does My Boyfriend Like His Friends More Than Me? New Study Says He's More Emotionally Connected To His Friends

I don't really have a physical "type," but I would say there is one thing every guy I have ever been with has in common: They're all obsessed with their guy friends. I love a good old fashioned "guy's guy." For me, this works out splendidly because I, too, am obsessed with my friends, so this creates the perfect balance. But I can imagine why dating someone who is constantly giggling at his phone every time one of his bros posts in the GroupMe might force some girls to think, "Why does my boyfriend like his friends more than me?" and, more importantly, "Does he actually like them more than me, or am I just being dramatic?"

Well, unfortunately for anyone who was actually genuinely concerned about the probability of this, a new study found that your boyfriend does, in fact, love his friends more than he loves you. A small, new study published in Men and Masculinities found that men are more satisfied emotionally by their close heterosexual bonds with their male friends than they are by romantic relationships with their wives or girlfriends. "There was a conclusive determination from the men we interviewed," the study authors wrote. "On balance, they argued that bromantic relationships were more satisfying in their emotional intimacy, compared to their heterosexual romances."

So... yeah, hate to break it to you, but your boyfriend really does like his friends more than you. If you and his BFF were both burning in the same building, I'd recommend you start making your final goodbye calls because odds are you aren't being saved.

As anyone who's ever seen an Obama-Biden meme or watched an episode of Entourage will tell you, bromances are at an all-time peak right now when it comes to popularity in our culture.

The study authors believe this popularity has worked to make close male friendships more socially acceptable than they were before, and as a result, men are enjoying closer friendships with their guy friends. That being said, the authors warn that these close friendships can also get in the way of these same men getting to that level of closeness with the women in their lives, weakening the bond between romantic couples.

In order to put their theory to the test, study leaders put together a group of 30 of the most stereotypical "bros" you could ever think of. All 30 were straight college dudes with sports-related majors, and all but one of them were white.

To no one's surprise, all 30 of them admitted to having at least one "bromantic" friend. What constitutes a "bromantic" friend, you ask? Well, Time reports that it means a friendship where men are practicing "no boundaries" behavior, meaning sharing secrets with each other, telling each other how much they love them, and sharing a bed. Yes, you read that correctly: sharing a bed. In fact, almost all of them (29 out of 30) went so far as to admit that they've cuddled with their best bro.

For any woman who's dating an actually bro-ey guy, these findings should come as no surprise, but the real question remains: How does your bro of a boyfriend's relationship with his boys affect his relationship with you, and how do you know who he's closer to?

Researchers looked into how bromances differ from actual romances in the newest addition to the study. The study found that one of the main reasons your boyfriend feels closer to his friends is that he feels less judged by his friends than he does by you, making him more inclined to talk to them about his more embarrassing interests than he would be to tell you. One participant explained, “Tim knows I love listening to Taylor Swift and Beyoncé, but I keep that quiet [around my girlfriend] because she would judge me. I feel like I have to be more manly around her.”

Something else that makes them feel closer to their boys? Most of the guys in the study (28 out of the 30) said they would rather share more personal emotional information with a bro than a girlfriend. “If I found a lump on my testicle, I’d talk to [my bromance] rather than my girlfriend,” one interviewee said.

The rise in emotionally intimate male friendships is definitely a great step forward for men in the Western world. However, the study authors worry that the step forward for male relationships could mean a step backwards for male-female relationships. Time reports the men in the study sometimes used offensive language against women and adhered to a sort of bro code that always put their bros before their girlfriends. “Lovers are temporary,” one study participant said during his interview. “A bromance can last a lifetime.”

The small sample size of the study and the fact that all 30 of the dudes were pretty much different versions of the same person definitely gave the researchers' findings some limitations, but I'd still venture to say anyone who's come in contact with a stereotypical "bro" isn't that surprised... right?

More like this
20 Deep Questions To Ask Your Crush During A Game Of 20 Questions
By Cosmo Luce
Sofia Richie Rumored Boyfriend, Elliot Grainge, Is Reportedly A Family Friend
By Corinne Sullivan
9 Icebreakers For Meeting Your Partner's Friends For The First Time
By Rachel Shatto
Stay up to date