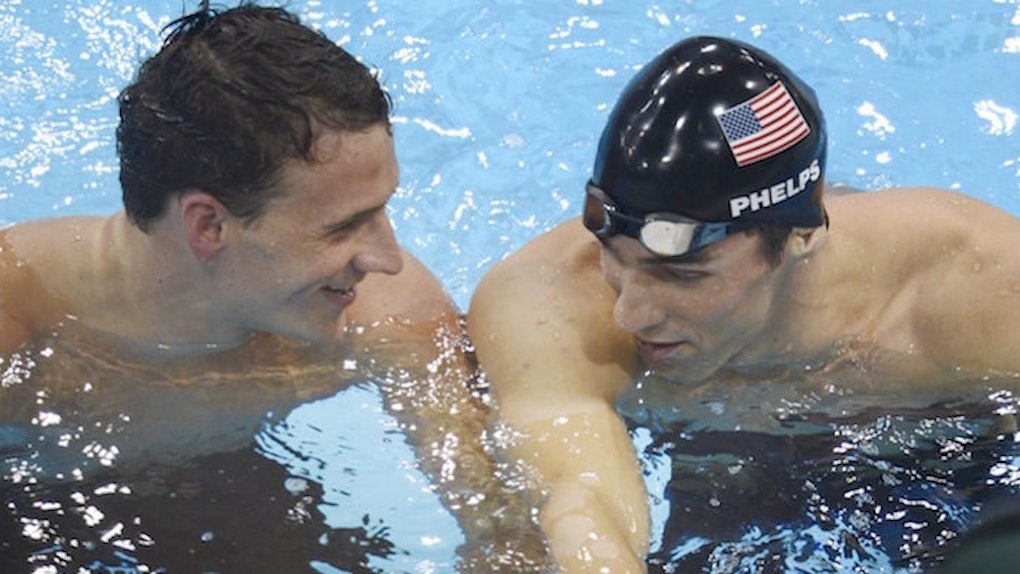 Look girls, I'm not going to lie to you, because I love you so. I love anyone who clicks into my articles because it gives me a falsified sense of well-being, sort of like happy pills. But I kicked that habit, so I have to take whatever I can get, you know?

Anyway, the truth is, I've never been the third wheel girlfriend in a bromance because I don't have boyfriends (anymore). I'm a wild, insatiable lesbian babe, and my entire body shudders in irrepressible disgust when I visualize a man's hairy chest.

And second of all, I don't have much patience for the "bromance." It just seems like a whole lot of testosterone, and as a self-identified mascara lesbian, I don't really care for testosterone. But that's neither here nor there.

I don't have patience for the bromance. It just seems like a whole lot of testosterone.

I'm here today to tell a cautionary tale about a beautiful 25-year-old girl who became the third wheel in her own relationship because of a bromance. In fact, the very demise of her relationship had everything to do with the bromance.

The girl in question is my cousin, Lilly.* Grab a glass of warm milk and close your pretty eyes. I'm about to take you on an adventure.

It's a hot and humid Florida winter night in 2010, and I'm wearing a black off the shoulder dress and leopard print heels. (I'm giving you a visual. That, or I'm wildly narcissistic.)

I'm at an epic Christmas party of a family friend. My sisters, brother and I are collectively tossed off champagne. We're throwing back exquisite oysters like frat boys throw back cheap beer. We're chain-smoking cigarettes, having a ball, talking shit about the guests. After all, there is nothing quite so sweet as indulging in ~salacious gossip~ with your siblings.

All of a sudden, I spot cousin Lilly strutting toward us, her blonde hair practically glowing in the pale moonlight. Traipsing behind her is a handsome, lithe, 30-something in a classic white button down and expensive designer jeans.

"Oh shit, that's cousin Lilly's new boyfriend!" I slur to my siblings. Then, because I just can't stop myself, I add in a hushed tone, "I hear he comes from money..."

And trailing behind Lilly's new (allegedly) rich boyfriend is a different boy. He has a thick red beard and an impressive man bun. He's a ginger hipster clad in cropped man pants, the kind where the ankle hangs out, totally vulnerable and naked.

"This is my boyfriend Drew* and his best friend Alex*!" cousin Lilly coos, showing them off like two show ponies. The boys both say "Hi!" in perfect unison, identical smiles exposing equally bleached out teeth.

I sense a bizarre dynamic, so I observe them all night.

I notice that Alex is right beside them when Drew meets her estranged father for the first time. Alex stands as relaxed as a medicated WASP when cousin Lilly irrationally yells at Drew because she's had too much champagne and is a bad drunk.

Alex is even unnaturally close to the young couple when they start sloppily making out at the end of the blurry night. I watch, my red lips hanging open in horror, as Drew puts his hand on cousin Lilly's left boob and Alex just stands next to them, gnawing on his steak like he's not being a total creep.

"I wonder if he's in the room when they have sex!" I rhetorically ask my brother, gazing into the starless 11 pm sky.

My brother takes a poignant drag on his cigarette. "I know this scene all too well. Alex and Drew are in the throes of a total bromance."

"What does that even MEAN?" I ask, like the naive little lesbian I am, too wrapped up in girl world to have ever even heard of such a thing.

"It means that Drew is in a relationship with not just cousin Lilly, but with Alex, too," my brother says. "Alex is going to go everywhere with them. You just watch, Z. Vacations. Family dinners. The gym. Shopping for lingerie. There are no boundaries to the bromance. Cousin Lilly will always and forever be the third wheel."

"How do you know so much about it?" I say through gritted teeth. My tone is accusing. I want cousin Lilly to be happy; she's been through a LOT, and I don't like the idea of her having to share her new relationship with some random dude in a fucking bun. I'm fiercely protective and I don't believe in sharing (this is why I don't do threesomes).

"I've been there," my brother answers in a voice that indicates he's being triggered by a dark memory and wants the conversation to end there.

Had my brother had his heartbroken in a bromance? He was looking suspiciously thin.

Had my brother had his heartbroken in a bromance? He was looking suspiciously thin.

I let him be and eventually fell asleep on a velvet couch in all of my makeup (false lashes included). But over the next few months, I pay close attention to cousin Lilly's relationship. I'm fascinated by this foreign dynamic.

And my brother is right. She's totally the third wheel in the bromance. The three of them go to San Francisco together, share a hotel room and even take a trio picture on the Golden Gate Bridge.

Alex attends every intimate family dinner. And the strangest part is, cousin Lilly kind of becomes Alex's girlfriend, too. When Drew and Alex get wasted together, she cooks them both a nurturing hangover breakfast along with little glasses of water mixed with Vitamin C packets. She is often their designated driver. And she has to stroke both of their egos equally.

Finally, cousin Lilly gets tired of being the goddamn third wheel. She tells Drew she needs some space from Alex and wants to spend time with just him. Drew is devastated.

"HOW COULD YOU PUT ME IN THIS POSITION?" he shouts, flailing his arms, clearly a man in a state of heightened passion and feeling.

"I'm not saying you need to break up with him. I'm just saying I would like to go to fucking dinner with just my boyfriend sometimes!" cousin Lilly yells back, furiously washing the dishes in her sky high heels, like every man's fantasy.

"That bitch is trying to WHIP my friend!" Alex tells everyone who will listen.

Drew and Alex somehow get really bitter toward each other, and won't go to parties if the other one is there. Cousin Lilly gets a reputation for being a controlling girlfriend when all she asked for was a few nights a week with her long-term partner.

Alex acts like a teen boy who has been thrust out of the house because mom got a new boyfriend. The whole thing is so dysfunctional that I can't stand it.

There is no room for girl energy in a tightly knit bromance.

Eventually, cousin Lilly and Drew breakup. The first person to pop back into Drew's life is Alex, of course. The two reunite, get back together like long lost lovers and everyone talks about it like it's a celebrity off-again, on-again couple. It's super annoying.

And, of course, they both collectively hate Lilly. And poor Lilly, who had more patience than anyone I've ever met, is the real victim in this tale of a screwed up bromance gone awry.

She lost her boyfriend and destroyed her reputation — because of the bromance.

Now, I freeze with fear when I see an innocent friend get involved with a boy who is deep into a romance with another boy. There is no room for girl energy in a tightly knit bromance. She will always come second to him. She will end up being a girlfriend to both of them, but only get the pleasure of having sex with one them. Talk about unfair.

Girls, if you meet an amazing guy and he brings his best friend to the second date, I have one word for you: RUN.

Unless you're in love. If you're in love — and I don't just mean "LOVE," I mean you're in deep, intoxicating love with a man in a bromance — I have a solution. So don't panic.

This is the only solution I've ever seen work in a bromance, so don't argue with me.

Plus, the only way to balance that much boy energy is to add more girl energy, babe.