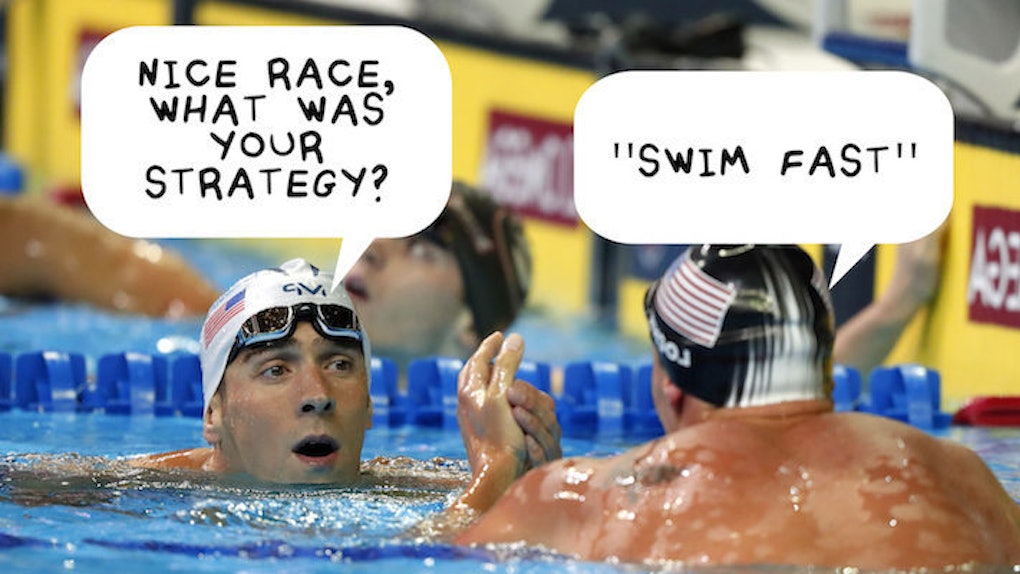 Ryan Lochte and Michael Phelps are facing off for the very last time tonight at 10pm.

Phelps has said he's retiring after these Olympics, which would bring his reign over the sport to an end and put a cap on the decade-long rivalry between him and Lochte.

Although “rivalry” might not be the correct word for it necessarily, seeing as Phelps has consistently beaten Lochte throughout their careers. Also, for there to be a real rivalry, it's customary for the two involved to dislike each other, which, unfortunately for us, they don't.

Even though Ryan Lochte would likely have taken Phelp's place as the most decorated olympian in history if Phelp's wasn't around, Lochte seems to have remained extremely chill about it.

In fact, being “chill” has been Lochte's brand in and out of the water for a decade. Of course, it probably helps you not be bitter when you win 12 Olympic medals during your career.

Ryan Lochte and Michael Phelps have been weird bros for years now. Just two dudes who are the best in the world at swimming fast through H2O.

They have nothing bad to say about each other, and, despite being seen as veritable opposites in the eyes of the public — Lochte is the frat bro who is somehow amazing at swimming and Phelps is the family man, super committed natural genius (both these personal brands are kind of bullshit, incidentally) — they get along like two tadpoles in a pond (See what I did there? … Like … tadpoles … in a pond … cause they swim … like tadpoles ... but in pools … do you get it? — please tweet at me if you don't. I'll explain).

Ryan Lochte and Michael Phelps have been weird bros for years now.

Lochte cultivated a persona of “relaxed partying frat bro” and made headlines doing stuff like wearing a grill, injuring himself while breakdancing so he couldn't swim for six months and publicly joining Tinder before the Rio Olympics (I assume he thought it'd be hard to meet people at the one place in the world where he is more famous than almost anyone else).

You can say I'm a party boy, whatever, but I don't care.

He also had a reality show called "What Would Ryan Lochte Do" (correct answer: go to swim practice every second of his entire life) and became sort of infamous for being a bit of a dunce (please see previous sentence re: Tinder), and all the while, he's also maintaining his place at the top of the podiums next to Phelps.

That's why his persona is probably just made up bullcrap.

First of all, you don't keep being the second-best swimmer in the world, behind the best swimmer in history if you are a lazy beer-shotgunning weirdo. It's just not possible. The fact of the matter is that Lochte is an extremely devoted, hard-working, swimming genius with more will-power than Wolverine.

And second of all, this persona of his as a laid back party boy relies upon him being seen as the opposite of Phelps. But it is Phelps — not Lochte — who was photographed ripping bong (my favorite photograph of all time — think about how big that guy's fish lungs are), and it's Phelps that has gotten in trouble with drinking, ending up with two DUIs.

Lochte himself doesn't let this faze him too much. As he explains, with his usual eloquence: "You can say I'm a party boy, whatever, but I don't care."

Also, most people believe having Phelps there in front of Lochte is the reason he got so fast.

Phelps himself once said,“I don't know if there's another person in the world who I race who brings out the best in me like he does.”

“We push each other,” explained Ryan Lochte. “That challenge of getting on the blocks and racing against him is a thrill so I'm definitely looking forward to doing that again.”

In the Olympics, when they've faced off head to head, Lochte has only beaten Phelp's once (when he won gold in the London 400m), whereas Phelp's has bested Lochte four times. Still, they've shared five medals on relay teams together, four gold and one silver. They're so often on each other's team that it's been hard to even try to pit them against each other.

Personally, I would have preferred some bitter rivalry with brutal shit talking and, I dunno, a lot of angry splashing water at each other in the pool, but I'll take two guys who like each other and just love to swim instead, if you insist.

Tonight will likely be the last time they're even in a pool together. Competitively at least. I guarantee you that Lochte, once he retires is going to start a YouTube series called "Pool Party!" where he interviews people in a pool while he parties. You heard it here first, nerds.