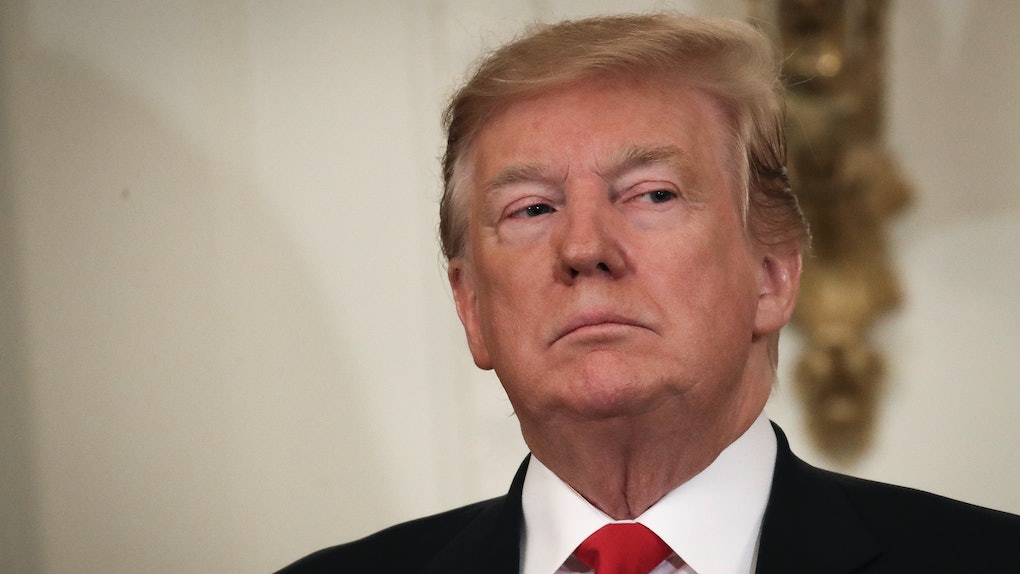 Who Wants To Impeach Donald Trump? Some Major Democrats Are Joining The Call

The calls for President Donald Trump's impeachment have seemingly multiplied now that Special Counsel Robert Mueller's report on the investigation into potential collusion between the president's 2016 campaign and Russia is public. Though the probe did not establish that the president committed a crime, it highlighted troubling conduct during his presidency, and politicians have been up in arms about it, calling for his removal from office. So who wants to impeach Donald Trump? It's really quite the list.

Several politicians have already expressed their support for impeachment in the wake of the report. If you've missed it, the nearly 400-page report, much of which was redacted, was released on April 18, includes damning evidence that Trump sought to derail the investigation into his campaign and presidency by attempting to fire Mueller and more. Although it ultimately neither condemned nor exonerated the president, the report found that the reason Trump failed to obstruct justice in stymieing the Mueller report is mostly because his aides refused to carry out his requests. Elite Daily reached out to the White House for comment regarding the details alleged in the report, but did not hear back. In a summary of the report released on March 24, Attorney General William Barr wrote that the Department of Justice (DOJ) had concluded that the president had not committed a crime, and as of publication Trump has been neither formally accused of nor convicted of any crime.

On the other hand, no crime is required for impeachment. "Even without Mueller's definitive conclusion on criminal behavior, there's no question that this is impeachable," legal scholar and author of A Citizen's Guide To Impeachment, Barbara Radnofsky, previously told Elite Daily. In her view, Trump's behavior merits impeachment "from his tweets to his appointees."

It's just not good, which is why some are recommending his removal from office. While as of publication, there have been no formal moves to impeach the president, these politicians are clearly ready to get started at any moment.

If Waters could've had it her way, Trump would have been out a long time ago. But she's especially ready for his removal from office after the Mueller report. According to The Guardian, she once again expressed her support of impeachment on April 18, adding that “Congress’s failure to impeach is complacency in the face of the erosion of our democracy and constitutional norms."

Congress’s failure to impeach would set a dangerous precedent and imperil the nation as it would vest too much power in the executive branch and embolden future officeholders to further debase the U.S. presidency, if that’s even possible.

The California senator shared her thoughts on the subject during a CNN town hall on April 22. When asked by an audience member whether she thought the report warranted impeachment, she didn't hold back. According to USA Today, Harris said, "I believe that we need to get rid of this president. That's why I'm running to become president of the United States."

The South Bend, Indiana mayor (and 2020 contender) didn't skirt around the topic, either. In a CNN town hall on April 22, he said that Trump "deserves impeachment."

According to Newsweek, he continued on to say that he was leaving the decision up to Congress, adding:

But I'm also going to leave it to the House and the Senate to figure that out because my role in the process is trying to relegate Trumpism to the dustbin of history, and I think there's no more decisive way to do that — especially to get Republicans to abandon this kind of deal with the devil they made — than to have just an absolute thumping at the ballot box for what that represents.

This 2020 candidate shared her support for impeachment on Twitter on April 19, pointing out that Trump allegedly "welcomed" Russia's efforts to influence the 2016 presidential election. After noting that Mueller left the decision to pursue action to Congress, Warren added on Twitter, "The correct process for exercising that authority is impeachment." Yikes.

The funny thing is, Tlaib introduced an impeachment resolution on March 27, just a few days after the report came out. At the time, it had only had the support of Rep. Al Green (D-Texas), per CNN, but she's gained some supporters in the days since.

This representative is with Tlaib. On April 18, Ocasio-Cortez tweeted that she thought that "Mueller’s report is clear in pointing to Congress’ responsibility in investigating obstruction of justice by the President," adding that it is Congress' "job" to follow up on those findings.

"As such, I’ll be signing onto @RashidaTlaib’s impeachment resolution," she continued.

Another 2020 candidate here. While speaking to SiriusXM on April 23, Castro, who served as the Housing and Urban Development secretary during the Obama administration, said he thinks efforts to impeach Trump are “perfectly reasonable."

He said, per The Hill:

What's clear from the Mueller report is that Bob Mueller and his team left the decision about whether to move forward on this obstruction of justice issue with Congress. So, what I said the other day is that I was asked, ‘Well, do you think that it, that they should move forward with an impeachment proceeding?’ And I think, yeah, that it would be perfectly reasonable for Congress to do that [and] that they should do that.

While there seems to be a lot of support for Trump's impeachment, the decision is ultimately on Congress. So be patient and keep your eyes open.