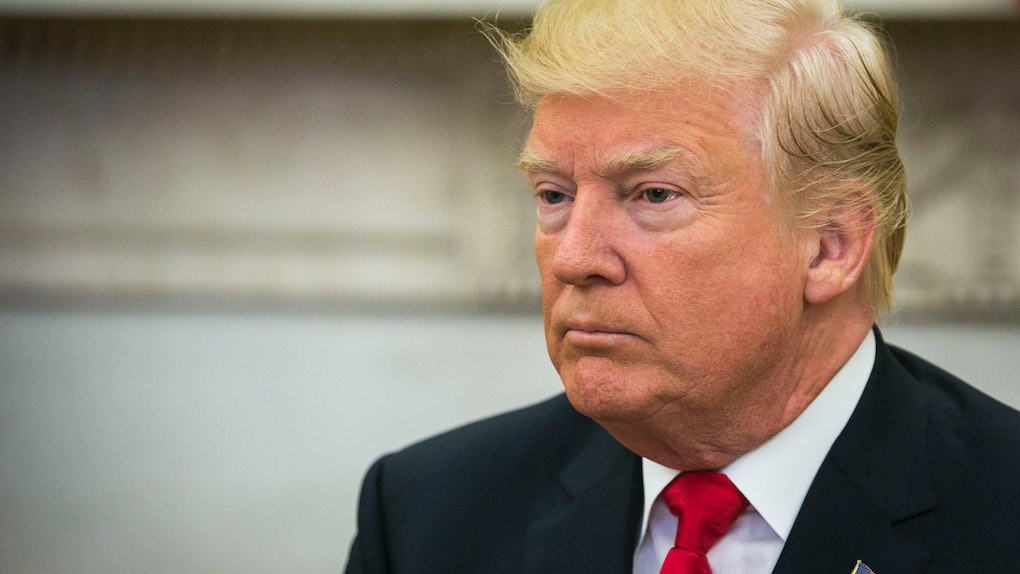 Will Trump Be Impeached After The Mueller Report? Here's One Expert's Take

The possibility that President Donald Trump could be impeached seems likelier than ever, especially because FBI Special Counsel Robert Mueller's report on an investigation into potential collusion between Russia and members of the 2016 Trump campaign does not look good. Though the report does not find Trump guilty of either collusion or obstruction of justice, it does establish strong obstruction evidence against him. So, will Trump be impeached after the Mueller report? An expert tells Elite Daily it's a real possibility.

As for an impending impeachment trial, it seems like it really depends on what Congress decides to do with Mueller's findings. The nearly 400-page report details 10 instances of Trump potentially obstructing justice over the course of the investigation, including by firing former FBI Director James Comey, trying to remove Mueller from his role, and more. Elite Daily previously reached out to the White House for comment on the details of the report and did not hear back, but President Trump has been touting both Attorney General Barr's March 24 summary of the report and the April 18 release of the redacted Muller report as a total exoneration.

Impeachment doesn't require criminal conduct, so even without Mueller's definitive conclusion on criminal behavior, there's no question that this is impeachable.

She points toward Trump's behavior, which she suggests undermines the integrity of the presidency — a point Congress previously used to impeach President Bill Clinton. "Undermining the integrity of the office is at the level of harm that causes the House to impeach and it's impeachable," says Radnofsky. "They don't have to prove obstruction as they would in a criminal case. No intent is required."

So what are the grounds of impeachment? Radnofsky says they could very plainly be an abuse of the office, a violation of the Constitution or a violation of his oath. "[His oath] means he's responsible for the appointments he makes, the wrong conduct of his appointees and the mismanagement of the office. The violation of the oath was the focus of Clinton and President Richard Nixon's impeachments," she explains. Mueller's investigation led to the charges of five people affiliated with the Trump and his 2016 campaign, including Michael Cohen, Michael Flynn, Paul Manafort, George Papadopoulos, and Roger Stone.

And there are a number of issues surrounding Trump that merit impeachment, according to Radnofsky, from reportedly failing to protect the U.S. electoral system (the Mueller report established that Russia interfered in the 2016 election, and President Trump's most recent response to the finding was to blame President Obama) to reportedly telling people to lie to reportedly considering a pardon for Paul Manafort, his ex-campaign chair. "Even aside from the Mueller report, we know publicly that much of his conduct — from his tweets to his appointees — is impeachable. Alexander Hamilton made it clear. It's all about harm to the society."

Some Democrats are already on board with impeachment. Rep. Rashida Tlaib (D-Michigan) announced plans to file an impeachment resolution in January 2019 and followed through on those plans in March. According to CNN, she only had one supporter at the time, Rep. Al Green (D-Texas), but other Democrats have expressed their support for the move in the wake of the Mueller report. Some of the latest? Sen. Elizabeth Warren (D-Massachusetts), who tweeted her support on April 19 and Rep. Alexandria Ocasio-Cortez (D-New York). On April 18, the freshman congresswoman tweeted, "Mueller’s report is clear in pointing to Congress' responsibility in investigating obstruction of justice by the President ... As such, I’ll be signing onto [Rashida Tlaib’s] impeachment resolution."

It may appear that Congress is just starting to weigh the prospect of impeachment, but Radnofsky believes that it has already started to get the ball rolling. "The process of impeachment is gathering information in the House first. I think it's being done now. It's been done quietly and confidently," she says. "The House Judiciary Committee has issued a subpoena for the rest of the Mueller report, and they're already taking evidence and asking for witnesses." But she believes that an impeachment trial won't happen until November 2020 if Trump is reelected.

Politicians like Rep. Jerry Nadler (D-New York) have expressed concerns about impeaching Trump while reports have said it could backfire by energizing his voters. Sure, there are complications, but Radnofsky says these issues aren't anything the United States hasn't dealt with before. "There was upset after Clinton was impeached but the country went on. We're still here."

Radnofsky also stresses that "impeachment is essential to the normal course of business when we have mal-performing presidents who won't resign when they clearly should." She also says impeachment shouldn't be looked at negatively. "What we're doing is protecting the country. The purpose is not to punish in any way other to remove him from office. The criminal prosecution can come later [if that's what prosecutors choose to do]."

She expects the fight to impeach Trump will be "hard," as the GOP may try to challenge whether the House's subpoena power was valid "even though it's been proven valid before." But Radnofsky overall thinks that Mueller's report, along with Warren's recent announcement, may persuade Congress to continue moving forward with impeachment. "This is the responsibility of Congress, not the Justice Department or the president," she concludes. "Congresspeople, regardless of their experience or age, have the right to pursue impeachment."

Currently, there are a few calls for impeachment coming from Democrats in Congress, with Rep. Ocasio-Cortez and Sen. Warren coming on board after the release of the Mueller report, and the only impeachment resolution thus far is Rep. Tlaib's that was filed in March with Rep. Al Green. Many other congressional Democrats and most 2020 hopefuls have said they are seriously considering impeachment, but the current focus appears to be on obtaining an un-redacted version of the Mueller report and getting Mueller to testify in front of Congress. After that happens, it will be interesting to see how Dems seriously revisit a discussion about moving forward with impeachment.