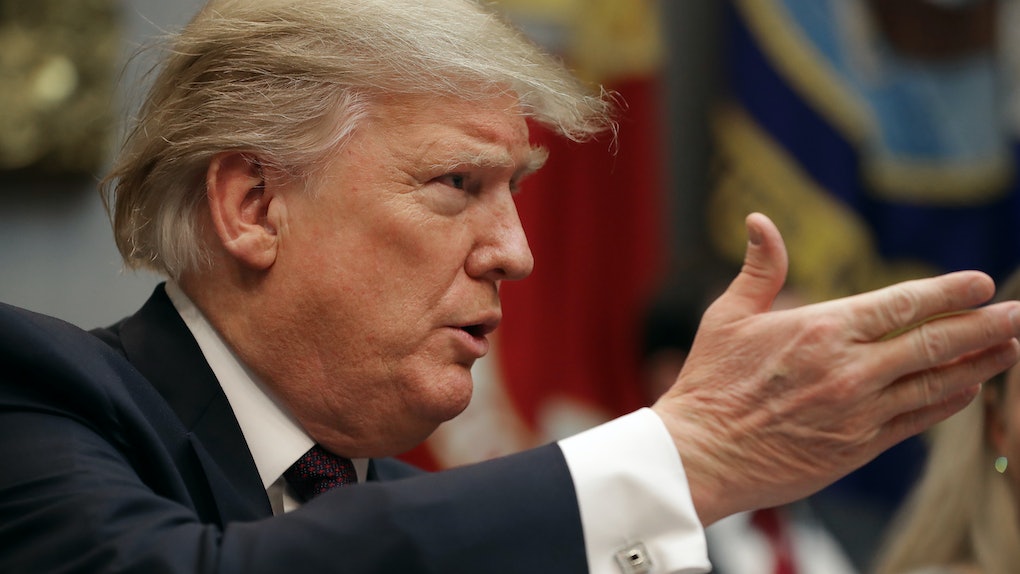 There's at least one sure thing about President Donald Trump: He likes to play the blame game. This time, he's pointing his finger at President Barack Obama in the immediate wake of FBI Special Counsel Robert Mueller's report on Russian meddling in the 2016 presidential election. Though Trump's comment about Obama and Russia after the Mueller report isn't far-fetched, it's so typical and very poorly-timed.

Trump made his comment on the evening of April 18, just hours after the report went public. The nearly 400-page report appears to be extremely damaging to the president, with damning evidence that he sought to derail the Mueller investigation into whether he colluded with Russia to influence the 2016 race. Elite Daily reached out to the White House for comment on the details alleged in the report, but did not hear back. While the report did not say Trump committed a crime, it surely leaves a big stain on his presidency. So why not try and shift the blame to his predecessor?

Trump had no shame about it, either, tweeting that Russian election meddling was all Obama's fault. The post read:

Anything the Russians did concerning the 2016 Election was done while Obama was President. He was told about it and did nothing! Most importantly, the vote was not affected.

Elite Daily reached out to representatives of Obama for comment, but did not immediately hear back.

For what it's worth, Trump's tweet isn't entirely off the wall. The Obama administration did issue a public report about Russian election meddling following the election, as NPR points out. In January 2018 Vice President Joe Biden claimed that the administration reportedly decided not to speak out about the meddling after Senate Majority Leader Mitch McConnell (R-Kentucky) reportedly refused to sign a bipartisan statement condemning the efforts. Without Republican leaders on board, Biden claimed, the Obama administration worried that speaking out would create the appearance of partisanship, and (ironically) undermine the election results. Per Politico, he said:

Can you imagine if the president called a press conference in October, with this fella, Bannon, and company, and said, ‘Tell you what: Russians are trying to interfere in our elections and we have to do something about it.' What do you think would have happened? Would things have gotten better, or would it further look like we were trying to delegitimize the electoral process, because of our opponent?

McConnell’s office rejected Biden's comments to Politico the same month, directing the publication to a September 2016 letter signed by party leaders in the House and Senate, including McConnell, and sent to the president of the National Association of State Election Directors. The letter urged cybersecurity precautions after reports of attempted hacking, however, Politico notes that the letter did not address specifically Russian efforts. Representatives of McConnell did not immediately return Elite Daily's request for additional comment.

Nevertheless, it's pretty wildly ironic that Trump would imply that the Obama administration should have stopped Russian meddling. Per the Mueller report, the Trump campaign, while not actively participating or coordinating with any efforts to swing the election, was expecting to benefit from Russian work. "[T]he investigation established that the Russian government perceived it would benefit from a Trump presidency and worked to secure that outcome, and that the Campaign expected it would benefit electorally from information stolen and released through Russian efforts," the report read in part.

You'd also think the president would be more focused on what the report revealed about him and his campaign. Although the report did not conclude that Trump committed a crime, it lays out obstruction evidence against him, notably his attempts to stifle the investigation, which has prompted fresh impeachment talks. Elite Daily reached out to the White House for comment regarding the details alleged in the report, but did not hear back.

Trump has just been lashing out, though.

In a tweet shared on April 19, he called the report "crazy," adding that its statements are "fabricated & totally untrue." And he really sounded off in a follow-up tweet, calling some of the statements "bullsh*t." He added that they were only given "to make the other person look good (or [him] to look bad."

If you take anything away from this, let it be that more deflections are likely on the way. Get ready.