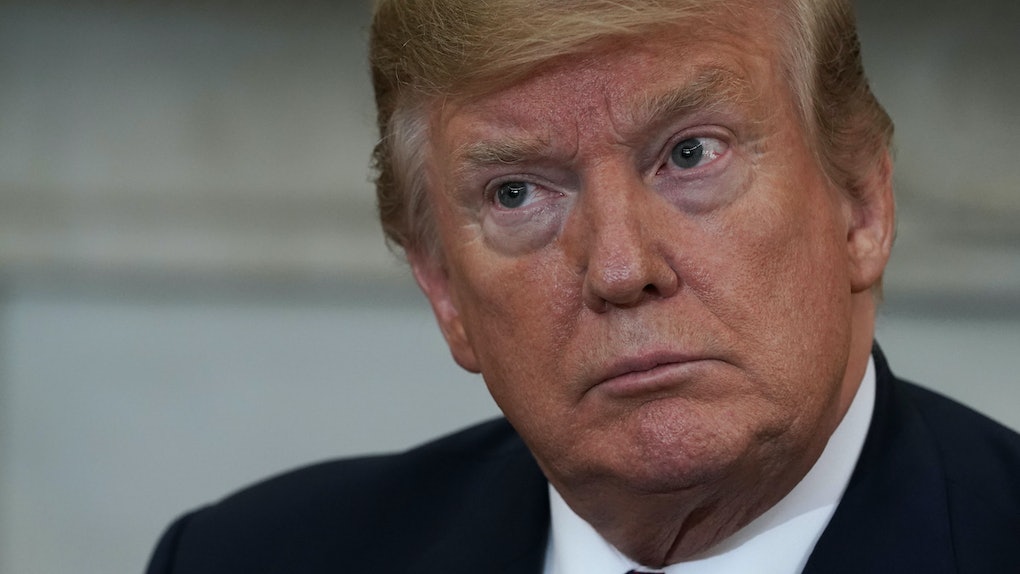 Not so fast! President Donald Trump had taken a victory lap after a summary of special counsel Robert Mueller's report was released and revealed that a probe had found no criminal collusion between the Trump campaign and Russia. But after the release of the full report, which included some, um, interesting information, the president changed his tune completely. As you probably guessed, Twitter is having a field day with his comments, and the tweets about Trump's changing response to the Mueller report roast his confusion.

Trump had previously claimed the report was a "total exoneration." He tweeted something similar just hours before the report was made public on April 18, writing, "No collusion. No obstruction. For the haters and the radical left Democrats — Game Over." But those tweets were based on a summary released in March by Attorney General William Barr, who wrote that the investigation did not find that the Trump 2016 campaign had worked with Russia to influence the 2016 presidential election. Barr also noted that the investigation did not come to a conclusion on whether the president had obstructed justice, but said he ultimately decided Trump wasn't guilty of a crime.

But although the report did not conclude Trump had committed a crime, it still was not flattering to the president. The report ultimately found that there had been links between the Trump campaign and Russia (although they did not amount to coordination or collusion), that the president had attempted on multiple occasions to squash the investigation, and that the White House had not always been truthful when discussing the investigation and those associated with it. Elite Daily reached out to the White House for comment regarding the details alleged in the report, but did not hear back.

Trump was not exactly happy. In a tweet shared on April 19, he called the report he once praised "crazy," adding that its allegations are "fabricated & totally untrue." He followed up by calling portions of the report "total bullsh*t & only given to make the other person look good (or [him] to look bad)."

Twitter users quickly flooded his mentions, pointing out and mocking all of his changing comments (because of course they did).

If you haven't read the report, it seems pretty damning, so it's not surprising the president is lashing out like this.

The report lays out evidence regarding the possibility that the president may have obstructed justice in these 10 instances:

Mueller apparently didn't bring charges against Trump because of legal doubts about indicting a sitting president. "We recognized that a federal criminal accusation against a sitting President would place burdens on the President's capacity to govern and potentially preempt constitutional processes for addressing presidential misconduct," Mueller wrote in part, per CNN.

But this doesn't mean that Trump has gotten away scot-free. The report has prompted fresh impeachment talks, with Democrats pledging to sign an impeachment resolution introduced by Rep. Rashida Tlaib (D-Michigan) in March. Rep. Alexandria Ocasio-Cortez (D-New York) is one of those supporters. On April 18, she tweeted, "Mueller’s report is clear in pointing to Congress’ responsibility in investigating obstruction of justice by the President ... As such, I’ll be signing onto @RashidaTlaib’s impeachment resolution."

Oof. Get some rest guys. Seems like things are about to get ugly (or should I say, uglier).